This recipe requires all of three ingredients (plus salt and pepper).

But something happens when you combine these three ingredients in a packet on the grill. 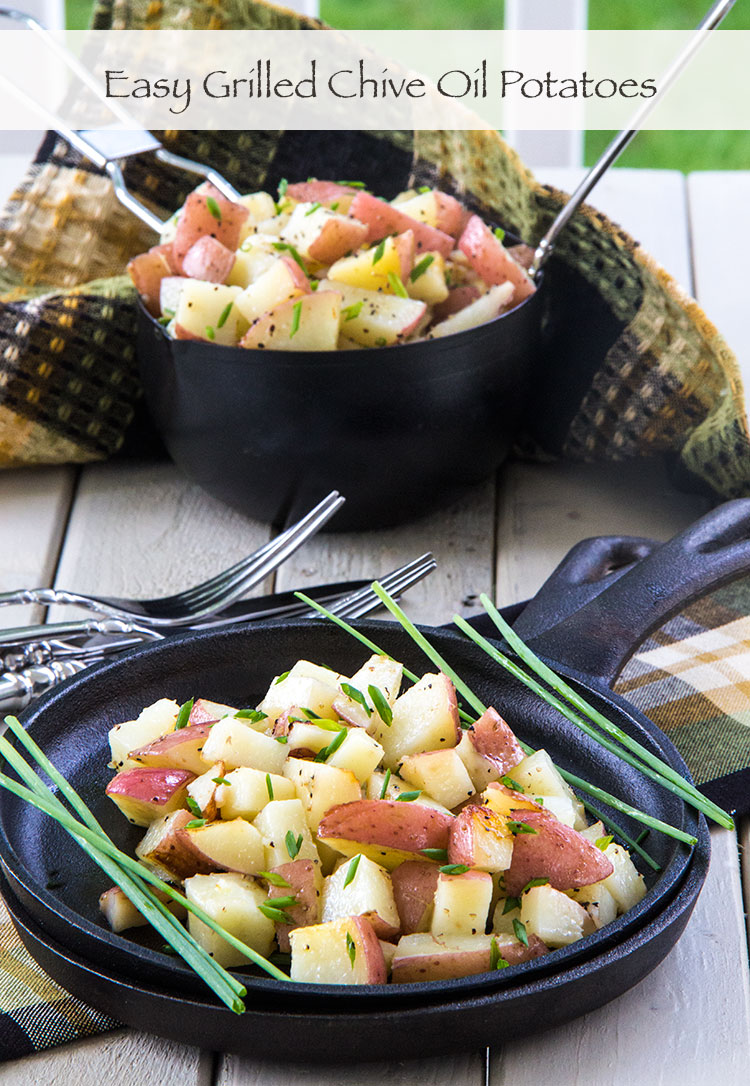 They mingle… then they unite… then they conspire…to become a dish that is irresistibly, addictingly scrumptious.

Meat-and-Potatoes-Guy and I both love this one and make these potatoes all the time during the summer months.

Here are all the ingredients you’ll need. So easy!

Prepare the grill for medium heat.

Potatoes get a bad rap because they’re high in carbs.

True, but they’re also a fresh, whole food with plenty of nutrition.

So red potatoes are a healthy side, when they’re prepared in a healthy way.

First step: leave the skin on!

This saves so much time and labor, making this recipe doubly easy.

But also, a lot of the nutrition in potatoes is found in and directly below the skin, so it’s a healthy choice (just be sure to buy organic potatoes or clean the potatoes thoroughly).

Grab a potato and slice the potato in half lengthwise.

Place the first half flat-side-down on the cutting board for stability, and cut thin strips of potato lengthwise.

Then run your knife in the opposite direction, cubing the potato.

Next grab kitchen shears (or a sharp knife if you don’t have shears) to chop some fresh chives.

I like to use a ton in this recipe.

Chives add lots of rich, zesty flavor, all for about 1 calorie per tablespoon!

Next grab a large sheet of aluminum foil and toss the diced potatoes and chives into the center.

Fold up the sides of the foil to create a square ’bowl’ containing the potatoes.

Drizzle some olive oil all over the potatoes.

Season well with salt and pepper.

Then match up the ends of the foil and fold over to create an air-tight packet.

The key is to be sure the packet is very tightly and thoroughly sealed.

Olive oil will drip out during grilling if it’s not sealed well.

Place the packet on the grill and cook for about 5 minutes.

Then use a pair of tongs to turn the packet on its side (one quarter turn).

Repeat, until each of the four sides have cooked about 5 minutes.

Very carefully open the packet (the steam is very hot!)

Then scoop ’em out and serve ’em up and enjoy the magic that occurs when potatoes, chives and olive oil hit the grill.

How easy is that?

I’m not sure it’s possible to pack more deliciousness into a 3-ingredient dish.

But also a richly flavorful dish that will most definitely satisfy any carb craving.