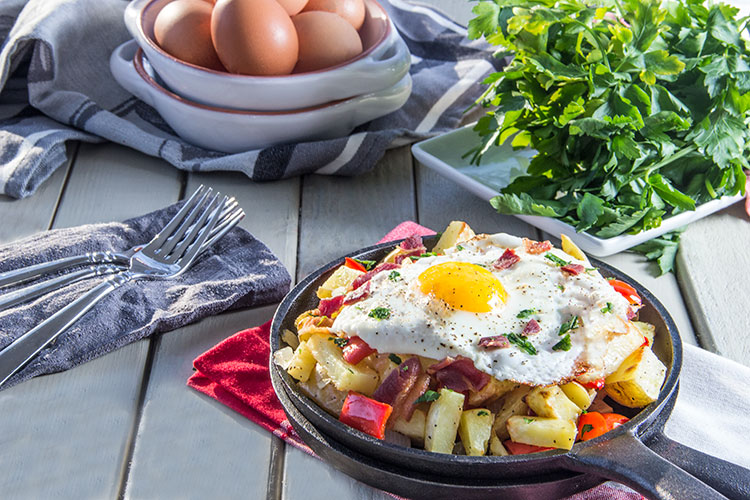 I have a question.

Why is Breakfast so biased against veggies?

There are definitely plenty of exceptions, but as far as the really big and most popular American breakfast selections go – from bagels with cream cheese, to cereal with milk, to pancakes with a side of sausage, to bacon-egg-and-cheese sandwiches – there isn’t one bite of fresh produce in sight.

Where’s the love for the nutrition-packed, antioxidant-rich vegetable?

I wanted to rethink that old-fashioned idea and make mine a Pro-Veggies-for-Breakfast household.

So I started with a baby step.

I kept some of the yummy breakfast classics (bacon and  sunny side up eggs!) to make a “breakfast skillet” …

…but I added some tasty, fresh veggies to the mix too, to increase the nutrition, the antioxidants, and (since veggies are so low in calories) the portion size. 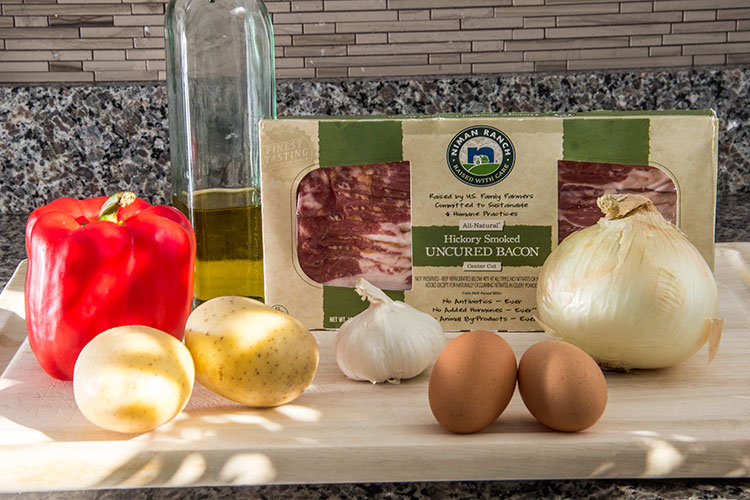 Here’s everything you’ll need to get started.

First step: be sure to remove the eggs from the fridge.

This will give them time to come to room temperature, which will make them easier to cook later.

Next step: preheat the oven to 400 degrees F. 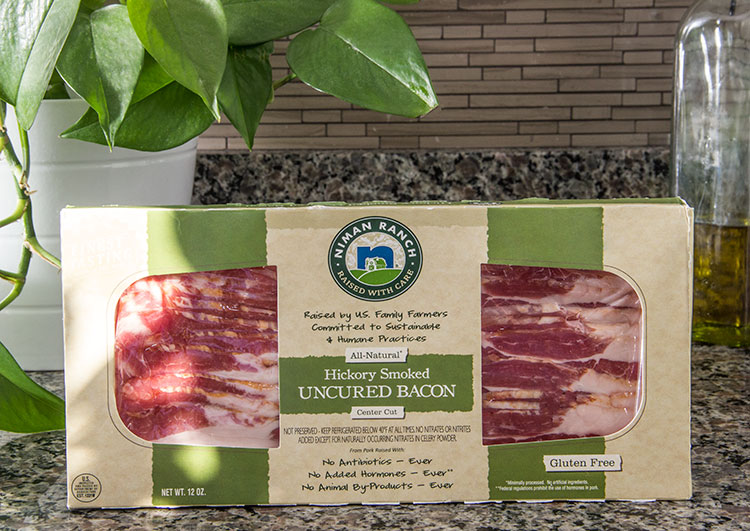 Then prepare the bacon.

I’m more careful about meat selection these days, and I look for pastured, humanely raised bacon.

This costs a bit more and isn’t as easy to find, but I believe it’s worth it.

Just Google the phrase “factory farm” and check out a couple of articles and videos.

Then you’ll probably totally understand why I now pay more for any kind of meat I eat and why I eat a lot less meat these days!

How will you know if your meat is humanely raised?

Second, don’t assume that labels like “organic” or “all natural” mean anything as far as farm animal welfare is concerned (it’s crazy, but companies can pretty much legally say whatever they please on labels).

For example, here are the standards for the Niman Ranch bacon pictured here – – it’s not perfect and they could do more, but at least the protocol requires some of the key terms to look for: “no antibiotics – ever,” “pigs must be raised on pasture,” and “bedding must allow animals to play, forage and explore.” 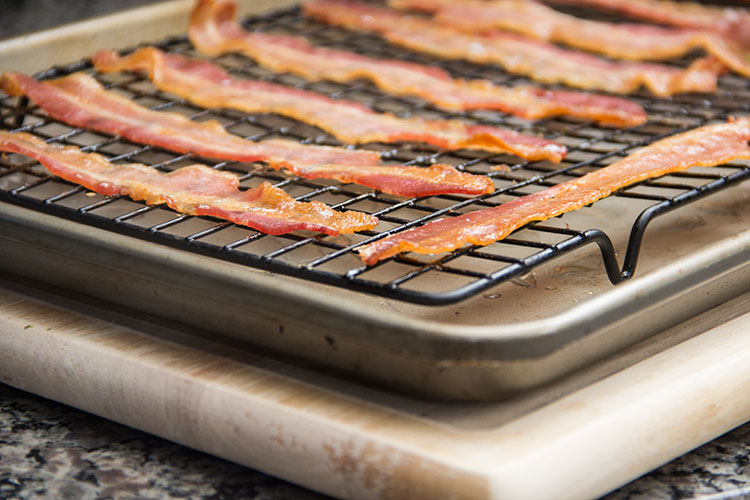 Place a wire rack on a baking sheet and arrange the bacon strips on the wire rack so that no two pieces are overlapping.

Cook the bacon until small bubbles form and the bacon begins to turn golden.

Then very carefully remove the baking sheet from the oven, so that bacon grease doesn’t splatter!

The bacon should continue to crisp a bit as it cools on the counter. 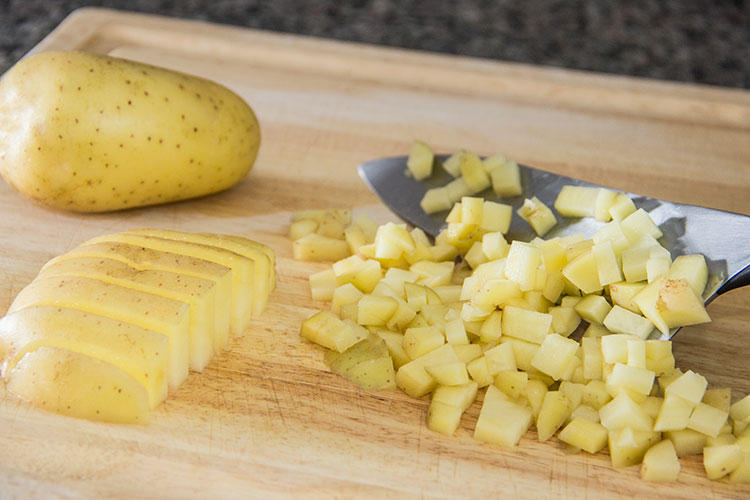 And meanwhile, as the bacon is cooking away, grab a couple of yellow potatoes and chop them up.

A lot of the nutrition in the potatoes lies in the skin, so no need to take extra time to peel them – just wash them thoroughly first. 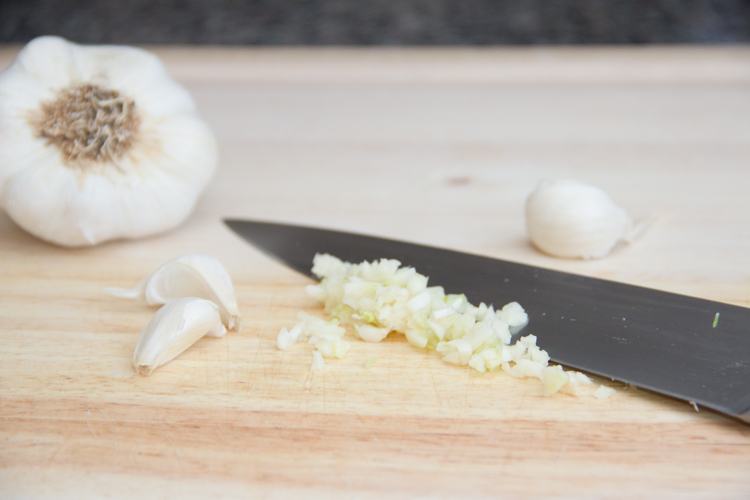 Grab a couple of cloves of garlic and mince them up. 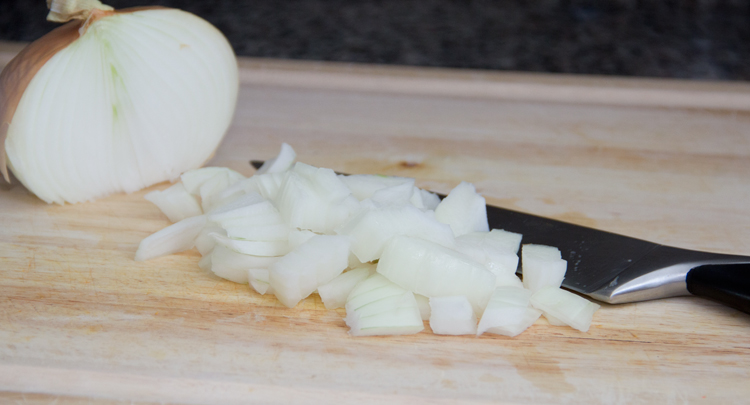 Also roughly chop up an onion… 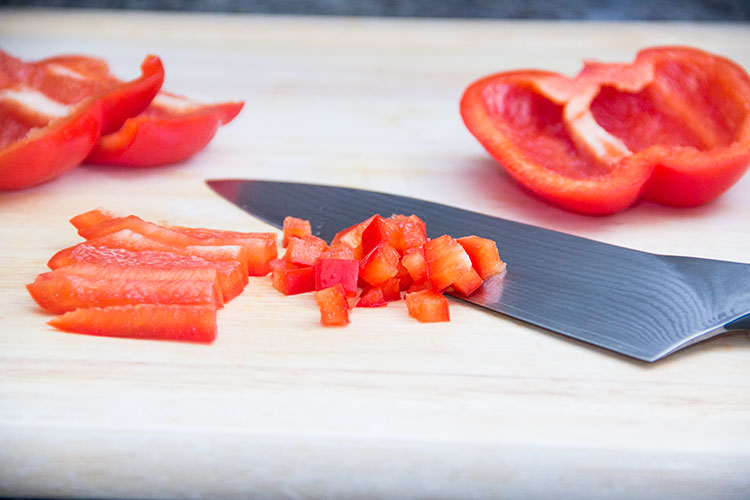 …and a red bell pepper. 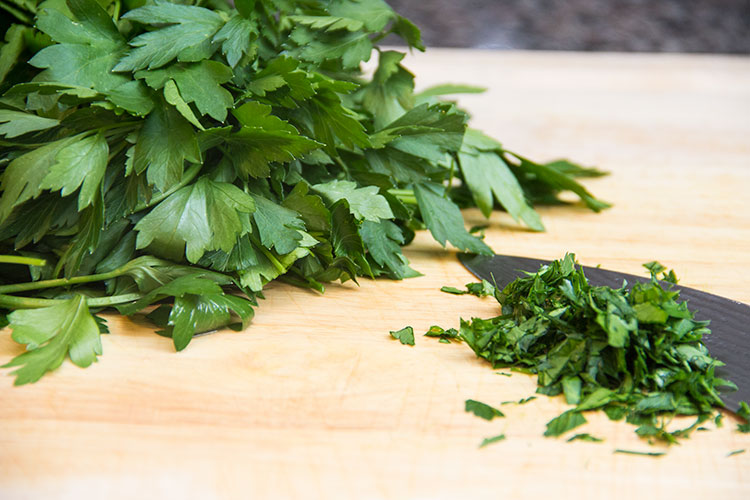 Also chop up some fresh parsley. 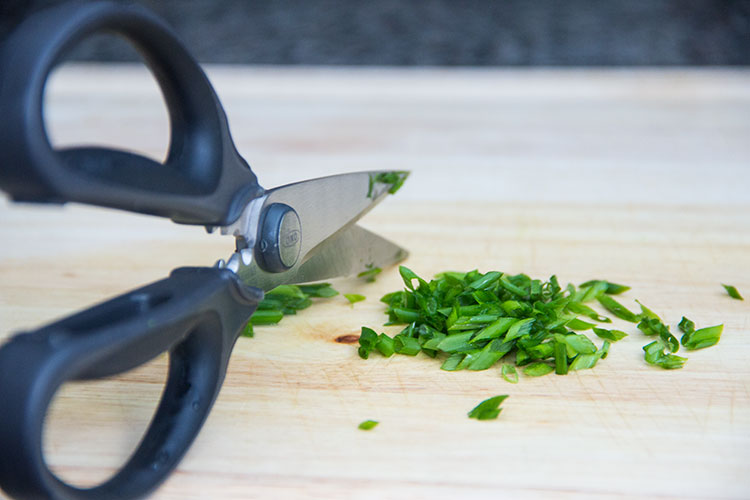 Or else some fresh chives – either works well in this recipe! 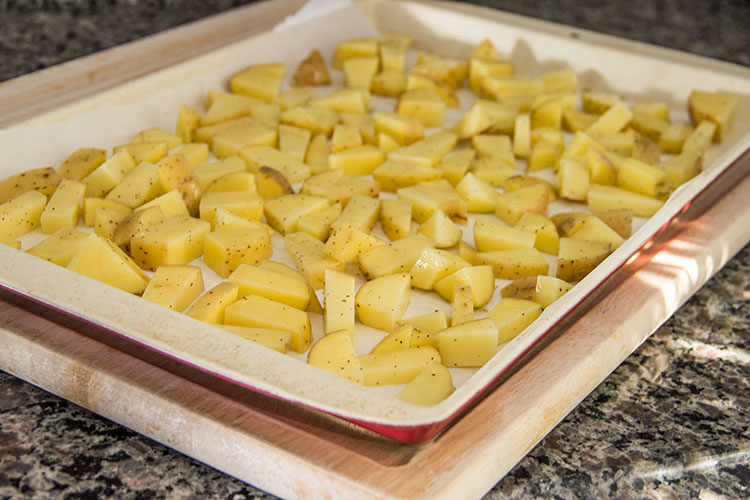 Next, line a baking sheet with parchment paper, and toss on the potatoes, along with some salt and pepper and a bit of oil.

Stir the potato around, just to be sure every piece is nicely coated with salt, pepper, and oil. 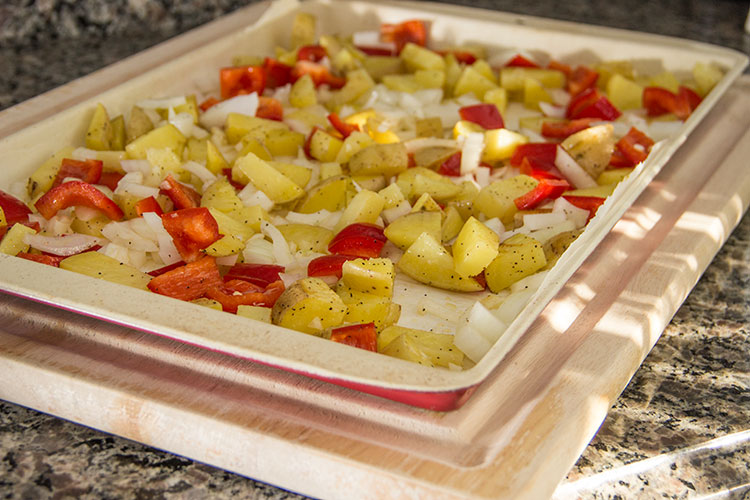 Next, remove the baking sheet from the oven and pile the onion, bell pepper, and garlic over the potatoes.

Drizzle on a bit more oil and add some more salt and pepper.

Mix up the veggies, making sure every piece is coated with salt, pepper and oil.

Then spread the veggies across the pan, so that pieces are not overlapping.

Toss the baking sheet back into the oven to cook until the potatoes begin to turn a delicious-looking golden brown.

Then grab a spatula and transfer the roasted veggies onto serving plates, crumble up the cooked bacon, and toss some crumbled bacon over each plate. 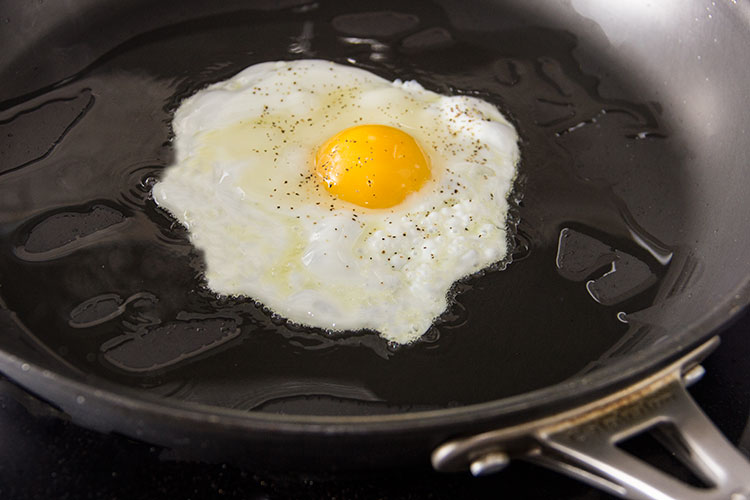 Meanwhile, as the veggies are roasting in the oven, cook up some sunny side up eggs.

If it’s your first try making sunny side up eggs: they’re not necessarily easy to get right the first time around, but these steps should be helpful.

The good news: even if your first attempts don’t look beautiful, they should still taste wonderful, and that’s all that really matters!

Pour a bit of oil into a large, flat skillet.

Rotate the pan several times, just to make sure that the bottom is fully coated with oil.

Then heat up the oil over medium-low heat.

Test the pan to make sure it’s hot by placing a drop of water in the skillet – – if it sizzles, the pan is hot.

When the oil is hot, break one egg into the skillet.

If there is room in the skillet for a second egg (without overlapping the first), add a second egg.

Season with salt and pepper and allow the eggs to cook – resist the temptation to touch or move the eggs at all! –  until the whites are completely solid white (there shouldn’t be any clear/transparent liquid remaining).

Then grab a thin, flat metal spatula (it’s very tough to scoop the eggs with a thick, plastic one) and slide it under the egg, circling all the way around, just to make sure no part of the egg is stuck to the pan. 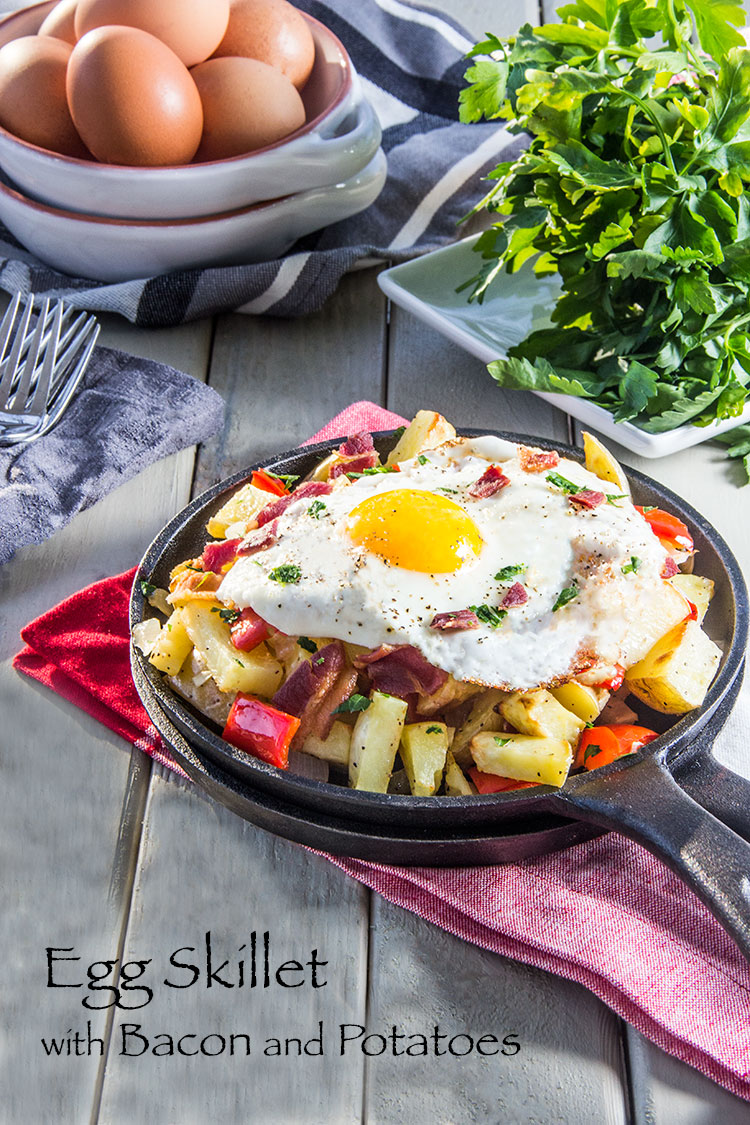 Slide the egg off of the pan and arrange it on top of one of the plates of roasted potatoes – – the crowning glory!

Repeat this process until all of the eggs are cooked.

Top off each plate with plenty of fresh parsley or chives, and serve.

This dish is very hearty, but it has a freshness and lightness too.

The best part of the dish, in my opinion: if the egg is cooked correctly, the yoke should be golden and runny when you cut into it, spilling a yummy “sauce” all over the roasted veggies.

The very best bite, in my opinion: one that has a little of everything – some crispy bacon, a bite of tender roasted potato, some crisp veggies, and a bit of the creamy yoke over it all.

And they add so many healthy vitamins and antioxidants to the meal, plus lots of filling fiber.

Many more fresh-produce-for-breakfast recipes to come!