It was a yellow and orange construction site theme for Trevor’s third birthday party! Here are all of the photos and details (Danger: 3-Year-Old Ahead!)

Trevor and I were sitting on the floor of his bedroom, flipping through the book Curious George and the Birthday Surprise.

“You have a birthday coming soon,” I told him, “what kind of party would you like?”

I glanced at some of his favorite books that were scattered across the floor: Mickey Mouse Clubhouse: Look and Find, Little Blue Truck, The Little Engine That Could, Goodnight Goodnight Construction Site.

“A Mickey Mouse Clubhouse party?  A Little Blue Truck party? A choo-choo train party? A construction site party,” I asked, just absent-mindedly listing off what I was seeing in front of me.

I asked him again the next day, just to be sure. 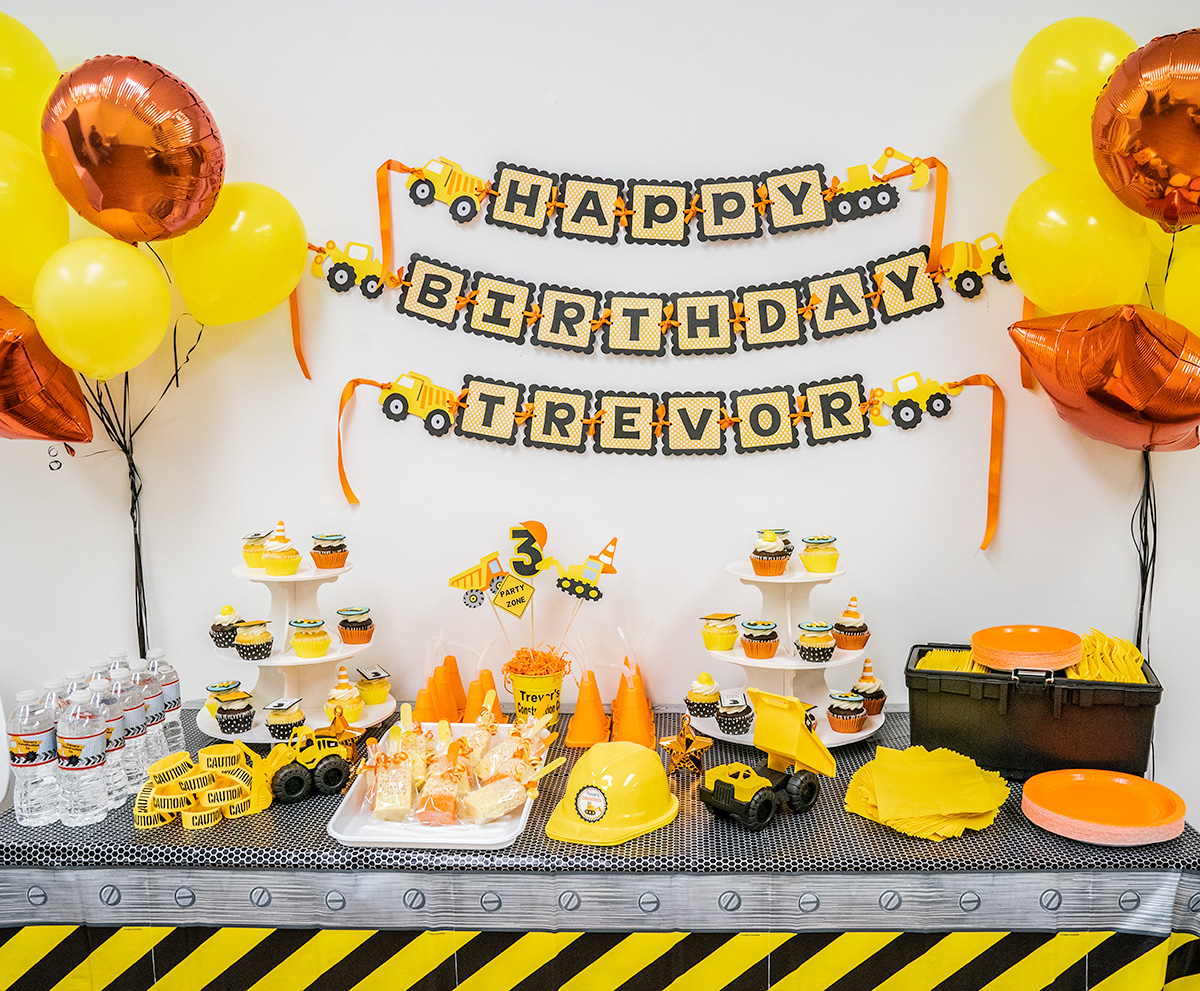 Tru seemed pretty clear on what he wanted.  So I went to work planning Trevor’s third birthday party, with a construction site theme.

And as I browsed through Google images and Etsy shops, one thing became very clear to me.

There are lots of little boys out there requesting construction site birthday parties.

There were hundreds of cute ideas online. 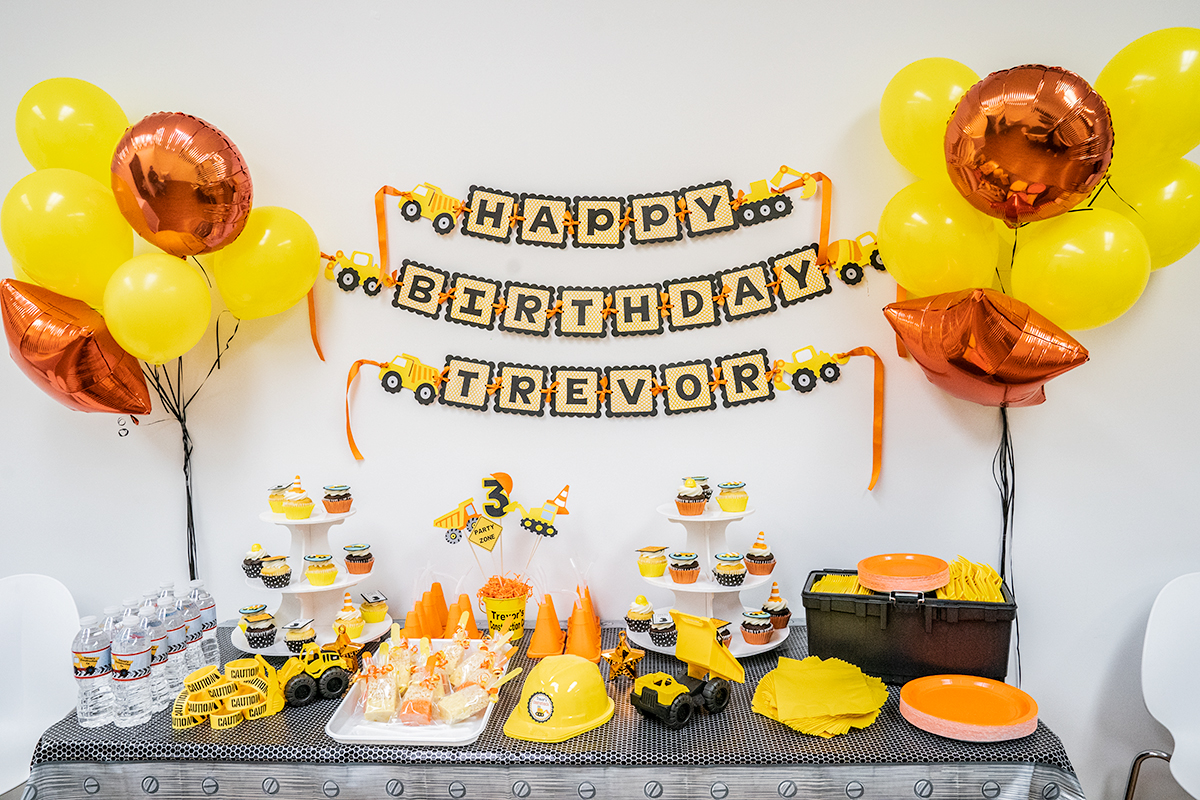 This birthday banner – with different construction trucks on each end – was one of my favorites.

It’s been funny becoming “Mama” to a little boy.

Prior to Tru, all trucks were just “trucks” to me.

They all looked exactly the same.

The idea of a “construction site party” would have been, quite literally, the very last thought on my radar.

But reading truck and construction books with Trevor each and every day, I can now tell you – with confidence – that this banner features all of the following construction vehicles:

I also loved this “I Dig Being Three” birthday shirt.

I wavered on whether or not to buy it because, generally speaking, Tru insists on wearing one of two Lightning McQueen sweatshirts each and every day.

In the end, I decided he should wear something other than an old Lightning McQueen sweatshirt for his third birthday party.

So I came up with a little scheme.

On the morning of the party, I put the cute construction shirt on him and zipped up his Lightning McQueen sweatshirt over it.

The old sweatshirt was useful anyway, since it kept him from getting the white shirt dirty before the party began.

Then, when we arrived at the indoor playground where the party was held, he was so excited to start running around.

I removed the Lightning McQueen sweatshirt along with his winter jacket.

He was too excited about the balloons and the slides at the playground and everything else going on for his party.

The kids all seemed to love these orange construction cones.

I thought they were cute for the construction party theme, but they also doubled as cups for the kids.

They had little caps and straws, which was an ideal way to serve beverages to a room full of toddlers!

The sticker on the front of the hat read, “Trevor’s Construction Co.”

I wasn’t sure if the kids would want to wear these party hats, but most of the kids seemed to love them.

Trevor wore his hat throughout a good portion of the party.

We handed them out during lunch for the kids to play with, and then we had the kids take them home as party favors.

I also put personalized labels on the water bottles.

The labels had yellow dump trucks on them that read, “Trevor’s Construction Co.”

I put the tableware and paper plates in a clean (new) black tool box.

Plus a construction-themed yellow and black plastic tablecloth.

A local bakery made these construction-themed cupcakes for the party.

We’ve ordered birthday cakes from this bakery since Trevor turned one, and every year I’m always so impressed with the incredible detail of their cakes!

The bakery also made these Rice Krispies treats that were dipped in frosting to look like paintbrushes.

I placed the treats on a clean (new) paint roller tray.

We gave these away as favors before the kids left.

This was the first year Tru had a special request for his birthday: “have friends at my party.”

In the past, we’ve just done small family parties at home.

But this year, we had his birthday party at an indoor playground and invited all of Trevor’s friends from the neighborhood and school.

The bad news: Trevor was born in New England during wintertime.

So about 24 hours before the party – after over a month of planning – an updated weather forecast was posted:

There would be snow in our area on the morning of the party, anywhere from a couple of inches to twelve inches.

Anywhere from a couple of inches to twelve inches?

Chris and I didn’t know what to do, but we decided to go ahead with the party despite the forecast.

On the morning of the party, we drove through a light flurry of snow, and arrived at the indoor playground ready to set up for the party.

We weren’t sure if the weather would keep guests from showing up.

At 11:00, which was the scheduled start of the party, nobody had arrived.

Tru had been talking nonstop about having “friends at my party.”

I didn’t want him to be alone and disappointed.

In the end, we got about three inches of snow on that day, which is “nothing” in New England.

And everybody showed up.

As for Trevor’s favorite part of the party, I think he just loved having the chance to bounce on the bouncy house and slide down the slides with his friends (they don’t talk to each other much at this age, but they do laugh and play together!)

Oh, and he definitely loved having his very own small bag of chips for lunch.

We’d ordered Chick-fil-A catering for the party and gave Tru a plate with some strawberries and chicken nuggets.

But I’m pretty sure he ate just the chips.

And the frosting off of his cupcake.

So overall, the construction birthday party was a big success.

Chris and I wavered on whether or not to throw a big, themed party for Trevor’s third birthday.

But in the end, I had fun planning all of the details.

One of my favorite memories:

Watching my son – looking so much less like a baby and so much more like a little boy – blow out a “3” candle on his birthday cupcake.

I won’t get that sweet instant back, not in this lifetime, or any.