How strange has the weather been lately where you live?

After all the stories I’ve heard in the news, I’m wondering if there’s a part of the globe that’s experienced typical weather-as-usual these past few months…

In New England, where I’ve lived my whole life, we’ve had one of the most snow-free winters I can remember.  Typically, New Englanders say spring doesn’t arrive until May.  But temperatures reached the mid-50’s all of last week. That’s crazy for February here.

Then today we had a sudden snow storm.  Since this hasn’t happened all winter, it’s given me a major craving for comforting, heartwarming chicken soup…

I love this soup.  It’s full of flavor and very homey and satisfying.

There’s a soup and sandwich place near my work building that serves a delicious chicken florentine soup that features chicken, noodles, carrots, celery, and spinach.  It’s full of cream (and therefore full of fat and calories) so I generally avoid it, but I wanted to create a healthier version to cook at home.

I thought these ingredients would work perfectly with Avgolemono. This is a traditional Greek soup typically made with chicken and thickened with a lemon-and-egg mixture. It must be the Greek’s greatest gift to the world (kidding. sorry.) because it adds a delicious, flavorful creaminess to your soup without all the saturated fat you’d get in a butter- or cream-based soup. 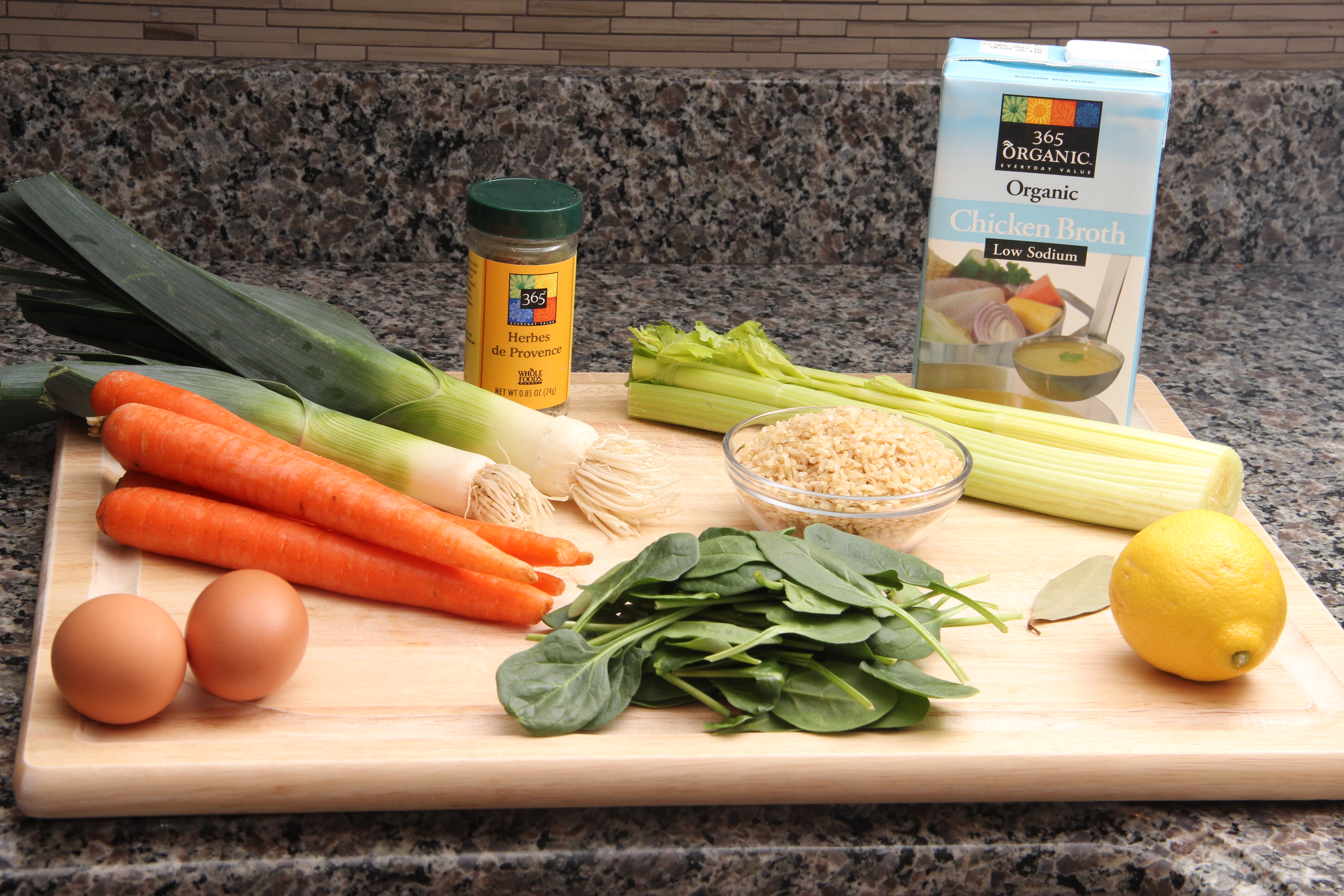 Here are the main ingredients.  Tons of healthy vegetables!

Start by cooking some par-boiled brown rice in the microwave according to the directions on the box. This is a time-saver so you can just toss the cooked rice into the soup at the very end.

Next up: the leeks.

If you’ve never cooked with them before, I highly recommend them because they lend a very mild, sweet onion flavor to your dish.

They are also extremely healthy with tons of vitamin K (for bone health), folate (good for heart health) and lots of antioxidants.

Just be sure to clean them well because the part you eat comes straight from the soil.

Cut off the roots and the green ends, leaving just the white and pale green stalk.

And put them into a large bowl of water, pulling the layers apart as you toss them into the bowl.  Swirl them around and allow them to sit for a few minutes.  This process should get them nice and clean.

While those are soaking, heat some extra virgin olive oil in a large stock pot over medium-high heat.

Cube some skinless, boneless chicken breasts, season with salt and pepper, and saute until they are nicely browned on the outside.

Scoop the chicken out of the pot and place in a bowl covered with foil.  Set aside.

Chop up some celery and carrots and add to the pot.

Now it’s time to grab those leeks out of the bowl of water and add them to the pot as well.

Add a bay leaf.  Season with salt and pepper.  Cook for a few minutes, allowing the vegetables to soften. Add the herbes de provence.

Reduce the heat to low so that the soup stops boiling. 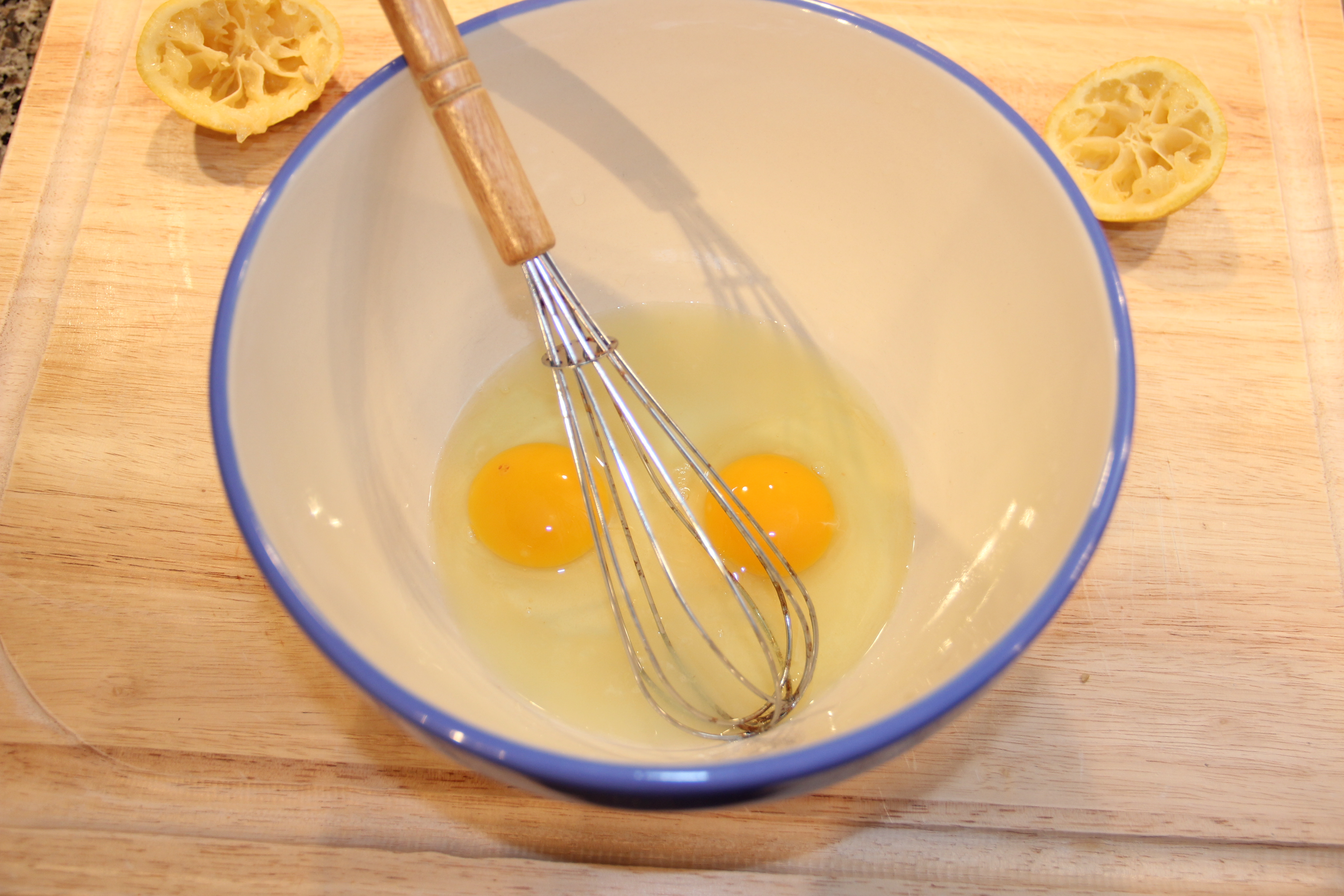 Now for the trick to making the soup thick and creamy:  Squeeze the juice from one lemon into a large bowl.  Add two eggs to the bowl and whisk everything together.

Eggs have had a lot of bad press in the past because eggs yolks contain high amounts of cholesterol, but all of the studies I could find suggest that they are a healthy choice. The real proven cause of heart disease is saturated fat (found in butter, cream, fatty meats, and greasy, processed foods).  So having eggs in moderation (no more than one a day) is a healthy choice.  And eggs do have a lot of healthy nutrients: they are a good source of protein, Vitamin D, lutein (good for preventing vision loss) and choline (good for maintaining brain function and health).

Pour 1 cup of chicken broth into a bowl and heat in up for about 2 minutes in the microwave.  It should be hot but not yet boiling.

While constantly stirring the lemon-egg mixture with a whisk slowly add the hot chicken broth.

Now start continually whisking the soup and slowly add the lemon-egg-broth mixture to the soup.  Since you brought the heat to low, the soup should no longer be boiling.  This process tempers the eggs so that they don’t cook up too quickly and become scrambled eggs in your soup!

You’ll notice that the broth instantly thickens and becomes richer and creamier.

It looks and smells so good.

And what a combination of flavors from the savory chicken and rice, the richness and heartiness of the eggs, and the delicious hint of citrus from the lemon.  It tastes incredibly delicious!

Here is the complete recipe:

Creamy Chicken Florentine Soup
Total Time:  1 hour
Prep: 30 minutes
Cook: 30 minutes
Yield: 6 servings
Ingredients
2 tablespoons olive oil
3 skinless, boneless chicken breasts, cubed
3 leeks,white and pale green parts only, thoroughly washed and chopped
4 large carrots, chopped
5 ribs celery with leaves, chopped
1 bay leaf
1  tablespoon herbes de provence
1 quart low-sodium chicken broth
1 cup cooked brown rice
5 ounces fresh spinach
1/2 cup juice squeezed from 1 large lemon
2 eggs
salt and freshly ground black pepper
Directions
Heat the olive oil in a large soup pot.  Season the chicken with salt and pepper and saute the chicken until golden brown.  Scoop the chicken from the pot, place in a bowl, and cover with foil.  Add the leeks, carrots, and celery and season with salt and pepper.  Cook over medium-high heat, until the veggies begin to soften, about 7 minutes.  Add the bay leaf and the herbes de provence. Reserve 1 cup of chicken broth.  Add the rest of the broth, adjust the heat to high, and bring to a boil.  When the broth begins to boil, add the chicken back in, along with the cooked brown rice and the spinach. Season to taste with salt and pepper. Bring the heat down to low.  In a large bowl, beat together the two eggs and the lemon juice. Heat the 1 reserved cup of chicken broth in the microwave until it is hot but not boiling, about 2 minutes.   Whisking continuously, slowly add the broth to the egg and lemon mixture.  Once all the broth is incorporated, slowly add the mixture to the soup pot, stirring continuously.  Laddle into bowls and serve.