I have given an extensive amount of thought to chicken pot pie.

No one should publicly admit to something like this, I realize.

But here is my oh-so-pressing dilemma:

But it takes a lot of work to make it from scratch.

And it also takes a lot of calories and saturated fat to make that old-fashioned thick, buttery crust. 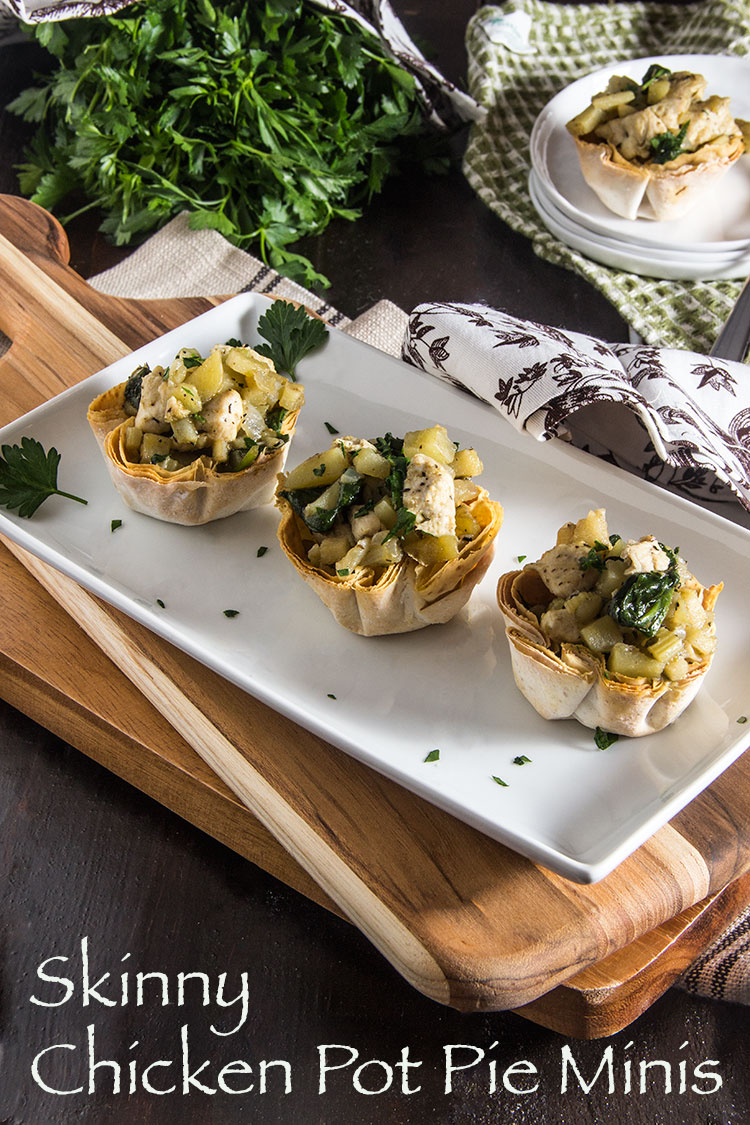 The fillo saves time over making a homemade crust, which is an excellent bonus.

This all adds up to a very generous serving of comforting chicken pot pie for a very reasonable 350 calories and 2.5 grams of saturated fat.

Here are the key ingredients you’ll need to get started.

Begin by preparing the fillo crust.

Important Note: the fillo will need to be thawed for a few hours ahead of time, according to package instructions.

Another note: you will realize how important this step is if you operate like I do, which is to remember to remove the fillo from the freezer at 5:30 pm when you’re already starving.

Then search your cabinets far and wide for any circular tableware (a large mug or a small bowl) that measures about four inches in diameter.

Next, grab four sheets of fillo dough stacked on top of each other, and place the pile on a large cutting board.

Place a moistened towel over the remaining sheets of fillo to keep them from drying out, and set them aside.

Then put the mug or bowl over the dough, beginning at one corner, and use it as a guide to cut a small circle out of the dough.

I’ve found that a small serrated knife (like a steak knife) is best for cutting through the fillo.

Press the dough into a muffin tin to form a mini crust, and just keep repeating the process until your first muffin tin is filled.

Arrange 4 more sheet of fillo dough on the cutting board and repeat the process, filling a second muffin tin.

Then pour a bit of olive oil into a small bowl and, using a pastry brush, brush some oil all over the inside of each crust.

Time Saver: for anyone who doesn’t have the time or patience to cut mini crusts, there’s also a much faster way to prepare the crust.

Just grab a pie pan and press the pile of four sheets of stacked fillo dough into the pan.

Then use the serrated knife or kitchen scissors to trim off all the edges that extend beyond the edge of the pan.

And brush the olive oil all over the top layer of fillo.

Bake for about 8-11 minutes, or until the crusts are crisp and golden brown.

Meanwhile, prep all of the veggies that give the pot pie its rich, addictive flavor.

Begin by mincing some garlic.

Then dice an onion.

Also dice up a few parsnips (no need to peel them if they’re small, just rinse them thoroughly).

Also dice up a couple of potatoes (also no need to peel). 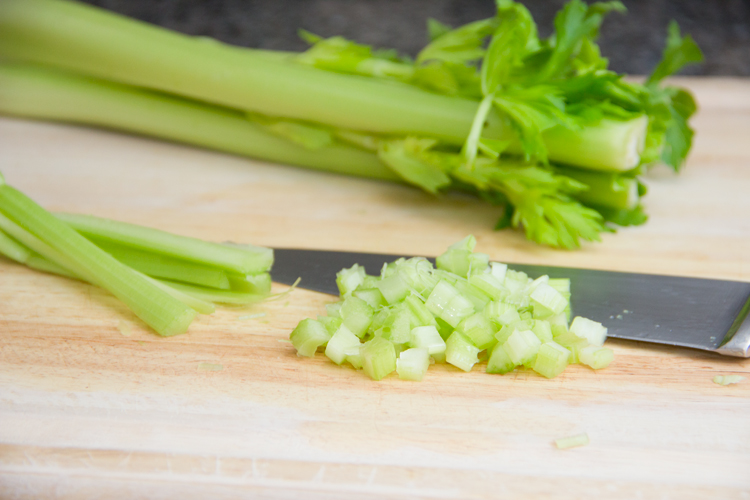 And last but not least, dice up plenty of celery too.

Next, grab a really big skillet and heat a bit of olive oil over medium-high heat.

Grab a couple of skinless, boneless chicken breasts and dice them up.

Organic chicken means that the animals are not given antibiotics and that their feed is raised without pesticides or chemical fertilizers. So much healthier for the animals and for us.

Grass-fed (or pastured) chicken means that the animals are able to graze on the pasture they were intended by nature to eat, which is humane for the animals and more nutritious for us: grass-fed meat contains far higher amounts of the healthy Omega-3’s that we need more of in our diets.

Season the chicken with a pinch of salt and pepper, and sauté until you see a tasty-looking golden brown crust on the outside.

Then toss the cooked chicken into a bowl, cover it up, and set aside for the time being.

Add a bit more olive oil to the pan, along with garlic, onion, potatoes, celery, and parsnips.

Season with salt and pepper, and cook, stirring often, until the veggies begin to soften.

Then turn down the heat to medium and add my two favorite seasonings for chicken: thyme and ground sage.

You will be tempted to “taste test” at this point, and I highly recommend giving in – the aroma is irresistible!

Add white wine for extra rich flavor, and allow it to cook and reduce down for a couple of minutes.

Then pour in some organic chicken broth.

Optional: I like to add some baby spinach to this recipe at this stage.

Spinach is nutrient-packed and it bulks up the recipe for almost no calories.

Plus, you’ll hardly taste it when it’s mixed in with all the other traditional chicken pot pie veggies (a very sneaky healthy add-in).

Also toss in the cooked chicken that you set aside earlier.

Then just allow the broth to simmer for a bit, stirring often to keep the veggies from sticking to the bottom of the pan.

After several minutes, you’ll see that the broth has cooked down so that there’s very little liquid left in the pan.

The remaining broth should be quite thick – – the starch in the potatoes will naturally thicken it.

Taste it and season to your liking with salt and pepper.

Remove the fillo crusts from the muffin tins, and fill each crust with heaping spoonfuls of the chicken mixture.

(Or if you did the time-saving one large pie, there should be enough pot pie mixture to fill the baked crust to the brim.)

Optional: chop up a bit of fresh parley as a garnish.

And the fillo brings that delicious flaky crunch without tons of calories and fat.

It’s the comforting deliciousness we all crave, but this one’s healthy too!