I’ve always loved eggplant parmesan, but it used to be quite a rare thing to find me cooking it at home.

The whole operation of putting each individual slice of eggplant through flour, and then egg, and finally breading, was time-consuming.

And then I could never fit more than a few slices of eggplant in the skillet.

So the first batch went cold as I added yet more oil and cooked the second and third batches (all while trying to keep the temperature of the skillet perfectly even so nothing burned along the way).

It was just a really lengthy, really messy process for me.

That has all changed, though, since I started making these pasta bowls with crispy baked eggplant parmesan “bites.”

This dish is super easy and foolproof, and that makes it just my kind of recipe!

And, no question, the bite-sized breaded eggplant pieces make this dish a lot of fun to eat too!

The seasonings in the crispy breading make the eggplant bites so scrumptious, and they’re perfectly complemented by freshly grated parmesan.

In addition, I sauté onions and peppers and add jarred marinara to create the pasta sauce – this really bulks up the serving size of the dish (and adds tons of nutrition too!)

So I can have a generous portion of this these eggplant parmesan bite pasta bowls without the calorie overload found in typical American eggplant parmesan dishes (only about 400 calories per serving for this complete meal in a bowl!)

…Begin with these key ingredients.

And preheat the oven to 425 degrees F.

Grab a small onion and chop off the root end.

Cut it in half end-to-end, then peel off the skin.

Place each half flat-side-down on the cutting board for stability, and cut thin, quarter-inch slices.

Next, grab an orange or yellow bell pepper and hold it upright on the cutting board.

Slice down each side of the stem, cutting the pepper into four quarters.

This makes it easy to discard the stem and seeds. 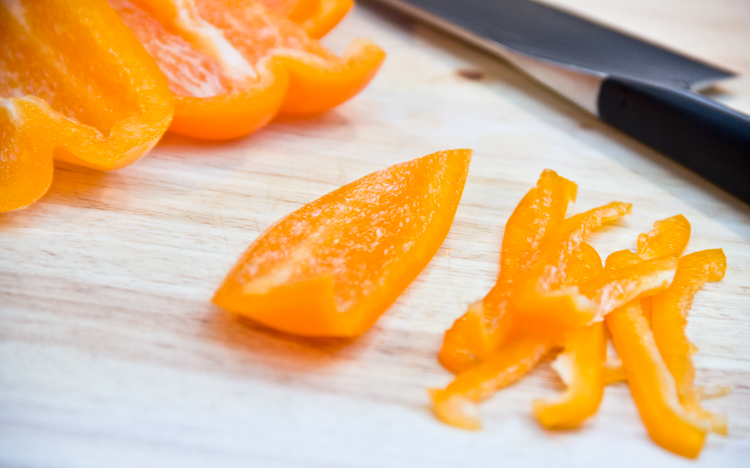 Then just thinly slice the pepper.

Chop off both ends to discard.

Then slice the eggplant in half lengthwise, place each half flat-side-down on the cutting board for stability, and chop it up into quarter-inch-sized pieces.

Next step: create a breading station on the counter.

Break one organic pastured egg into another large bowl.

to a third bowl, and season with garlic powder, onion powder, and dried thyme.

Stir until it’s all well combined.

Next, toss all of the diced eggplant, all in one batch, through the flour until every piece is lightly coated with flour. 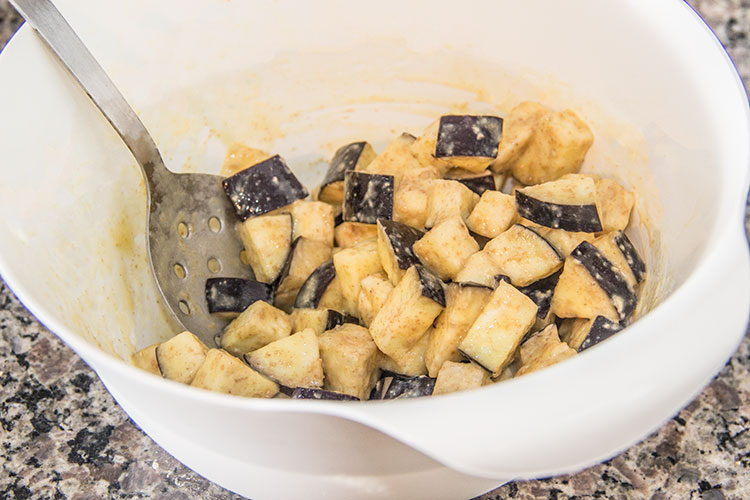 Then toss all of the eggplant bites into the mixing bowl containing the egg.

To keep your hands from turning into a sticky mess, use a large slotted spoon

to gently mix the eggplant with the egg, until every piece is lightly coated with egg.

Then use the slotted spoon to scoop out all of the diced eggplant and toss it into the breadcrumb mixture.

Toss the eggplant through the breadcrumbs until every piece is well coated.

(this helps keep the bottoms from burning).

Season the “bites” well with salt and pepper.

And measure out a bit of olive oil to lightly drizzle over the eggplant.

(The olive oil is the key ingredient that will transform the panko to a crispy golden brown in the oven.)

Meanwhile, as the oven does all of the work crisping up the eggplant in one big batch, (so much easier, in my mind, than cooking the eggplant slice by slice in a skillet) your hands are free to boil a large pot of water, salt it and toss in some whole wheat penne pasta.

Cook until the pasta is al dente, then drain.

In the meantime, also grate some fresh parmesan cheese.

And throw together a quick and easy veggie marinara sauce.

and sauté the sliced onion and bell pepper with a bit of olive oil and season with salt and pepper.

When the veggies are softened, add an organic jarred marinara sauce and stir until everything is well combined.

But it’s still a quick marinara that’s ready in just a few minutes, meaning it’s finished by the time the eggplant parmesan bites have finished cooking.

Grab a large mixing bowl and mix together everything – the cooked penne, the veggie marinara, the baked parmesan bites, and most of the grated parmesan – until it’s all well combined.

Then serve it up, topping each bowl with a bit more grated parmesan.

It’s all very straightforward and simple, so the process of cooking the dish is actually pretty fun.

Those old days of avoiding eggplant parmesan are so long gone – these pasta bowls are just so easy!