What to expect on (and how to get the most out of) The Polar Express Train Ride in Portland, Maine! A complete photo tour and guide.

Trevor spends up to an hour a day playing with his wooden BRIO train set.

He focuses intently, building new tracks and driving train cars over bridges, through caves, and around curves.

So when my mom asked if we wanted to do The Polar Express Train Ride at Christmas time, the answer seemed obvious:

“Trevor would LOVE that!”

We went ahead and purchased tickets for a ride aboard the The Polar Express, which is a yearly holiday fundraiser that’s run by the Maine Narrow Gauge in Portland, Maine.

Here’s a complete photo guide tour of The Polar Express Train Ride, detailing everything about the experience:

A Welcome At The Train Station

Our tickets indicated that we should arrive early to the Ocean Gateway Visitor Center (aka “the train depot”) in Portland, Maine.

The first thing we saw as we made our way toward the station:

An enormous black steam engine chugging toward us, billowing steam that floated around it like it was emerging from a cloud. 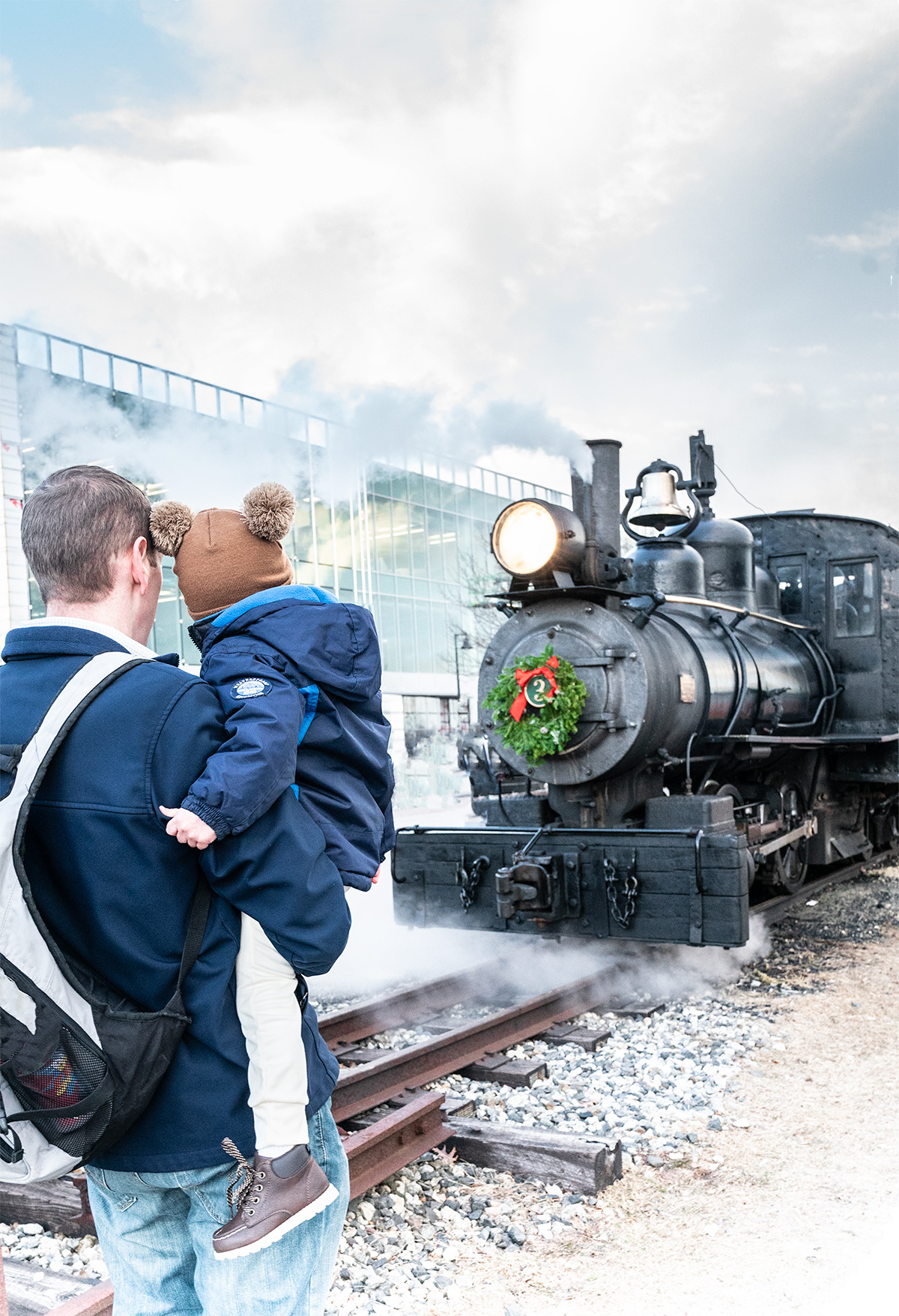 This was the antique steam locomotive (built in the early 1900’s) that would be our ride for The Polar Express!

In person, the train looked really grand and dramatic.

And – chugging along the tracks with its clanging bell – it sounded impressive too.

The steam engine was even festively decorated for the holidays, with multi-colored Christmas lights draped along the sides of the train cars and a wreath with a red bow hanging on the front of the train. 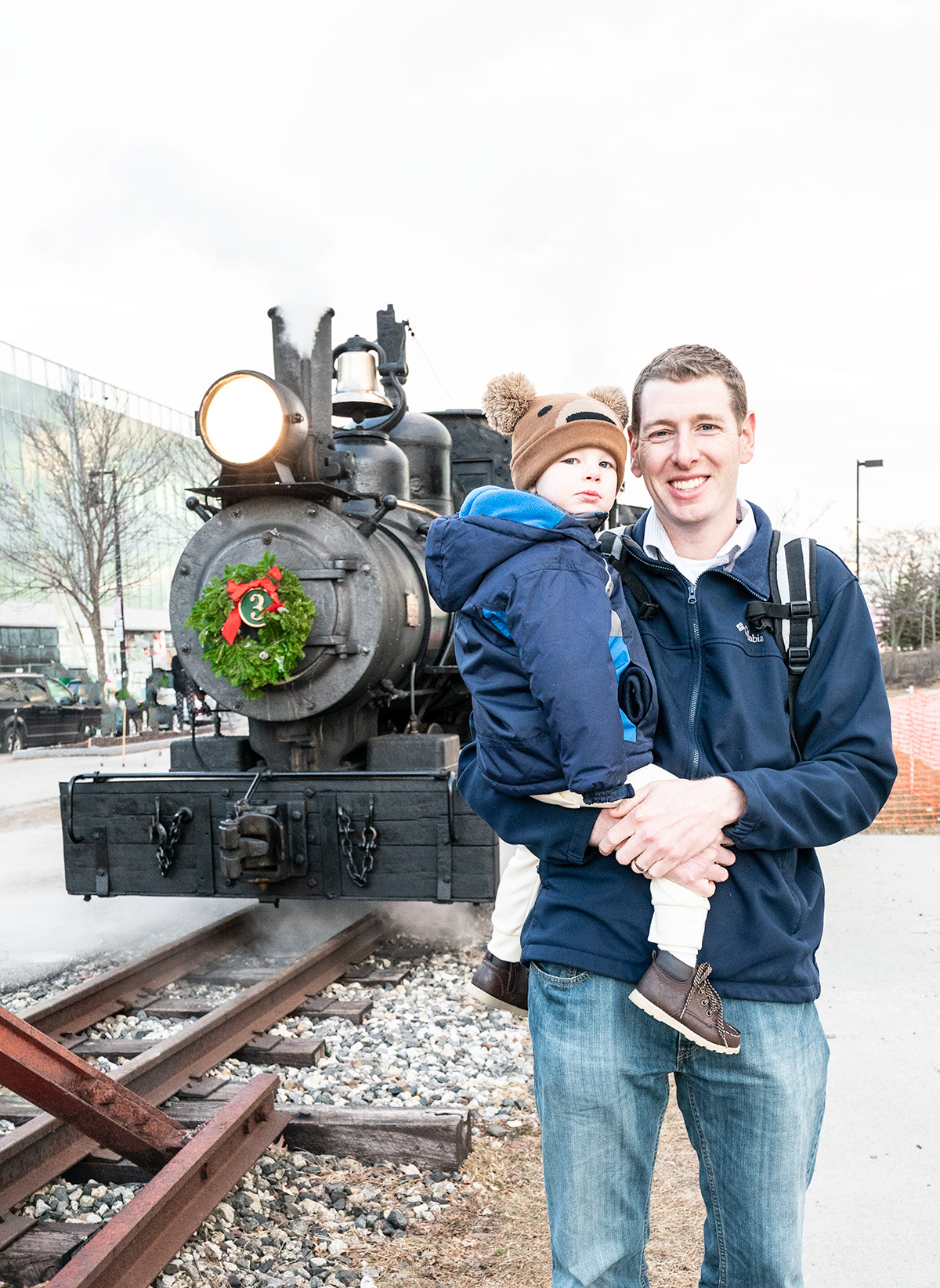 Tru loved having such an up-close view of the “super big train.”

The biting Maine winds were turning our cheeks to icicles so, once the train came to a stop, we headed inside the train station to warm up.

Tru barreled right for the child-sized model train located in the center of the station.

A large crowd of children had already gathered, climbing aboard and pretending to “drive” the stationary train.

The station was crowded with families, some shopping at The Polar Express gift shop located in one corner of the station.

In another corner, a giant Christmas tree was decorated with red ornaments and big golden Polar Express tickets that read, “BELIEVE.”

My favorite part of the set-up was a giant Polar Express backdrop where families could take turns posing for photos.

Since we had a total of nine family members riding The Polar Express, Chris, Trevor and I were able to get some family photos here.

And Tru even smiled for the camera!

All Aboard The Polar Express!

Soon, there was an announcement that everyone could begin filing out of the train station and onto the waiting train.

On our way to our train car, we met the train Conductor.

He was very animated. He asked Tru if he was excited to ride the big train, and he joked with the adults in the family.

Boarding our train car felt like stepping back into another era.

The interior featured lots of dark paneled wood – there was even a wood-paneled ceiling.

And the cushioned emerald-green chairs had an elegant nailhead trim and elaborate iron detailing.

Garlands and twinkling blue lights were draped across the ceiling of the train, and wreaths hung from the windows.

The familiar melody of the theme song from The Polar Express movie played through speakers.

Suddenly, the engine bell started clanging, and we were off!

The train set out early in the evening, as the sun was beginning to set.

This was a great time to ride because the train track runs right along the Casco Bay coastline.

I loved taking in the beautiful, scenic shoreline views as the old steam engine slowly rumbled down the tracks.

Soon Ya Got Hot Choc-O-Lat!

Suddenly the train came to a stop.

We looked out the window to see “chefs” – dressed in white chef’s hats and coats – waving and holding large trays filled with hot chocolate and cookies.

The chefs climbed aboard and began handing out treats while the song from The Polar Express movie, “Hot Chocolate,” played:

“Here, we only got one rule

Never ever let it cool!

Keep it cooking in the pot,

Soon ya got hot choc-o-lat!”

Each passenger received a plastic bag filled with two small sugar cookies, plus a cup of hot chocolate served in a beautiful ceramic Polar Express mug (the mugs were a souvenir for guests to keep).

As the train started up again, our “chef” pulled out a copy of The Polar Express book.

A narration of the book played through the speakers as she flipped the pages.

This time when we peered out the window, we saw a Christmas village display draped in multi-colored, twinkling Christmas lights.

We had arrived at the “North Pole,” and standing before us was the man of the hour, dressed in his red suit, waving to the train.

Santa hopped on board, and Tru’s reaction was priceless…

He ran right up to Santa and give him a big hug.

Santa asked Trevor if he wanted anything for Christmas, and Tru responded with the same answer he’s given to anyone who’s asked for the past month: “yellow dump truck.”

Next, Santa had a gift for Trevor (and one for every child on the train): a small silver bell.

For the ride back to the train station, Trevor rang his new bell while passengers were encouraged to sing along to classic Christmas carols that were piped in through the speakers.

And there was still one surprise left…

The Conductor made his way down the aisle, inspecting each child’s ticket.

When he arrived at our seats, he asked Tru for his name.

The Conductor then used a hole punch to create a large capital “T” in Tru’s golden ticket, just like the Conductor in the movie.

Tru is just learning how to recognize the letter “T,” since it’s the first letter of his name.

He was in awe.

(In the photo above, you can see him clutching both his golden ticket and his silver bell…)

Before long, we had arrived back at the train station.

As we made our way off of the train, the Conductor waved goodbye and wished us all a “Merry Christmas!”

I think for Trevor, the ride was pure magic.

And for all of the rest of us, adults included, we found the experience to be really special and memorable.

Here are all of the questions we had about The Polar Express Train Ride, plus all of the answers we learned after experiencing the ride:

What Happens Before The Train Ride Begins?

The Polar Express departs from the “train depot,” the Ocean Gateway Visitor Center.

You should arrive at the train station about 15 to 30 minutes before boarding time.

How Long Is The Polar Express Train Ride?

The ride is about 3 miles round-trip, from the starting point at the Ocean Gateway Visitor Center, to the “North Pole” to meet Santa, and then back again.

The complete train ride is about 45 minutes long.

What Are The Different Price Options for Polar Express Tickets?

The Polar Express is the biggest fundraiser of the year for the Maine Narrow Gauge museum, and it’s staffed entirely by volunteers! So your money goes to a great cause. In terms of ticket options, there are First Class and Coach tickets available for purchase.

What Should We Wear On The Polar Express Train Ride?

Kids (and adults!) are encouraged to wear pajamas, just like they do in the movie! I loved dressing Trevor in his festive Christmas pj’s.

Walking to and from the train station (and to and from our car) was, of course, freezing cold so be prepared to wear coats, hats, and mittens while boarding/exiting the train.

However, the train cars are heated. So once onboard, you’ll probably be comfortable removing all of your winter gear.

How Do We Get Tickets for The Polar Express Train Ride?

The Polar Express Train Ride is offered from Thanksgiving through Christmas.

But one really important note: tickets go on sale in early September and sell out extremely fast!

The Polar Express Train Ride is a really popular event, and tickets aren’t easy to come by.

For Related Travel Posts, Check Out:

The Stunning City You Absolutely Cannot Miss at Christmas

Travel Confessions: A Return to Québec City at Christmas