Toy Story Land Early Morning Magic was one of our favorite and most memorable experiences from our trip to Disney. Here are all the reasons why…

We’re walking down Hollywood Boulevard in Disney’s Hollywood Studios, and I’m taking in every last incredible detail – from the storefront signs, to the architecture, to the window displays.

There are no jostling crowds, no clamour and commotion, no distraction at all.

The park, when it’s this deserted, takes on a new level of beauty and wonder.

As we make our way toward the new Slinky Dog Dash roller coaster, concerns about endless long lines are the last thing on my mind.

My worry is if the park attendant will allow Tru to ride this brand new roller coaster that he’s been hoping so much to try.

One centimeter less and he probably wouldn’t have made it.

But Tru gets the green light from the Disney cast member, “Okay, have fun!”

Toy Story Land Early Morning Magic was one of our favorite and most memorable experiences from our trip to Walt Disney World. Here are all the reasons why:

The first benefit to Early Morning Magic is one we discovered as soon as we arrived at Hollywood Studios: the easiest-ever entry into a Walt Disney World park.

Since Hollywood Studios wasn’t yet open to the public and the crowds were nonexistent, we had the opportunity to park immediately in front of the entrance.

No long walk into the park.

No waiting for a tram to cart us to the entrance.

Entering the park was also smooth and simple.

No lines for bag check and security, no crowds jostling to get through the turnstiles…

Chris and I loved walking down Hollywood Boulevard and being able to see and appreciate everything.

We could just wander at our leisure, without the noisy crowds.

Oh, and later in the day when a sudden downpour hit at the same time that Trevor grew overtired and cranky from such a busy morning?

We made our way quickly back to our rental car, conveniently parked super close to the entrance.

No long walks in the rain, and no crowded tram rides with a fussy toddler.

Ride Every Ride – Again and Again

The Slinky Dog Dash is the newest roller coaster in Walt Disney World and the most popular attraction in Hollywood Studios, so it normally has wait times of between 80 minutes and two hours.

With Early Morning Magic, we waited in line for about ten minutes.

On previous days, long lines required us to carry Trevor away from roller coasters crying. He couldn’t understand why he wasn’t able to just hop back on the ride.

And we hopped back on the roller coaster for a second ride around the tracks.

Tru was in heaven.

It was a fun (and long-lasting!) roller coaster that we all enjoyed.

We also had plenty of time to ride all of the other Toy Story Land rides.

Toy Story Mania!, often a 90-minute wait, had no line.

And Alien Swirling Saucers, often a 30 minute wait, also had absolutely no line at all. 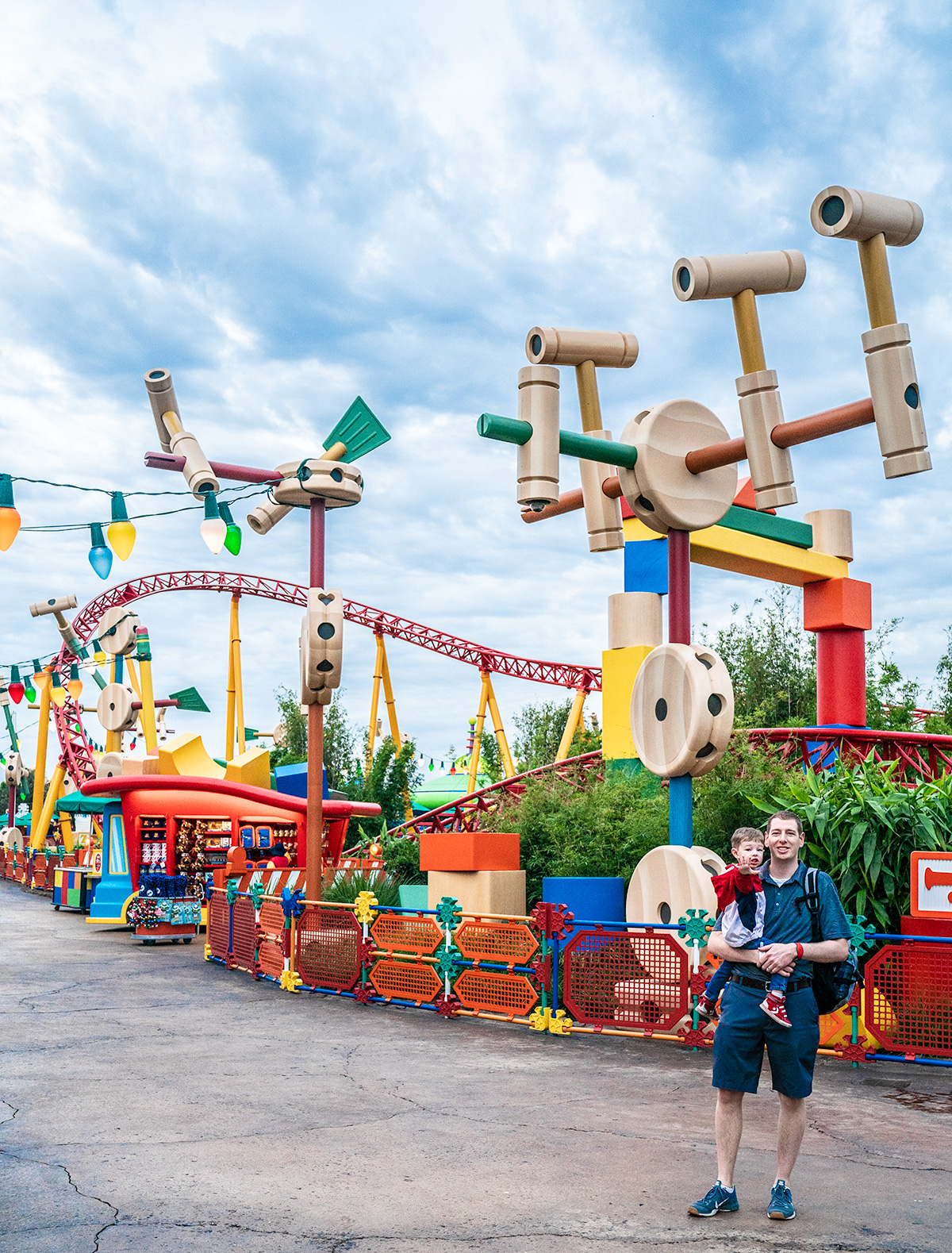 See The Sights Without Any Crowds

Not having to stand in lines. This is the obvious and major draw to Early Morning Magic.

But here’s another big benefit I discovered: the opportunity to take in and enjoy all of the incredible design detail of Toy Story Land.

Making my way through a (typically) crowded Disney park, I’m just trying to navigate around strollers and tantruming little ones and oncoming groups wearing matching t-shirts (while not losing my family).

During our time in Toy Story Land, the walkways were wide open and clear.

Chris and I were able to appreciate everything and point out all of the cool details to Tru.

There were giant Crayola crayons (and colorful chalk) spilling from boxes. 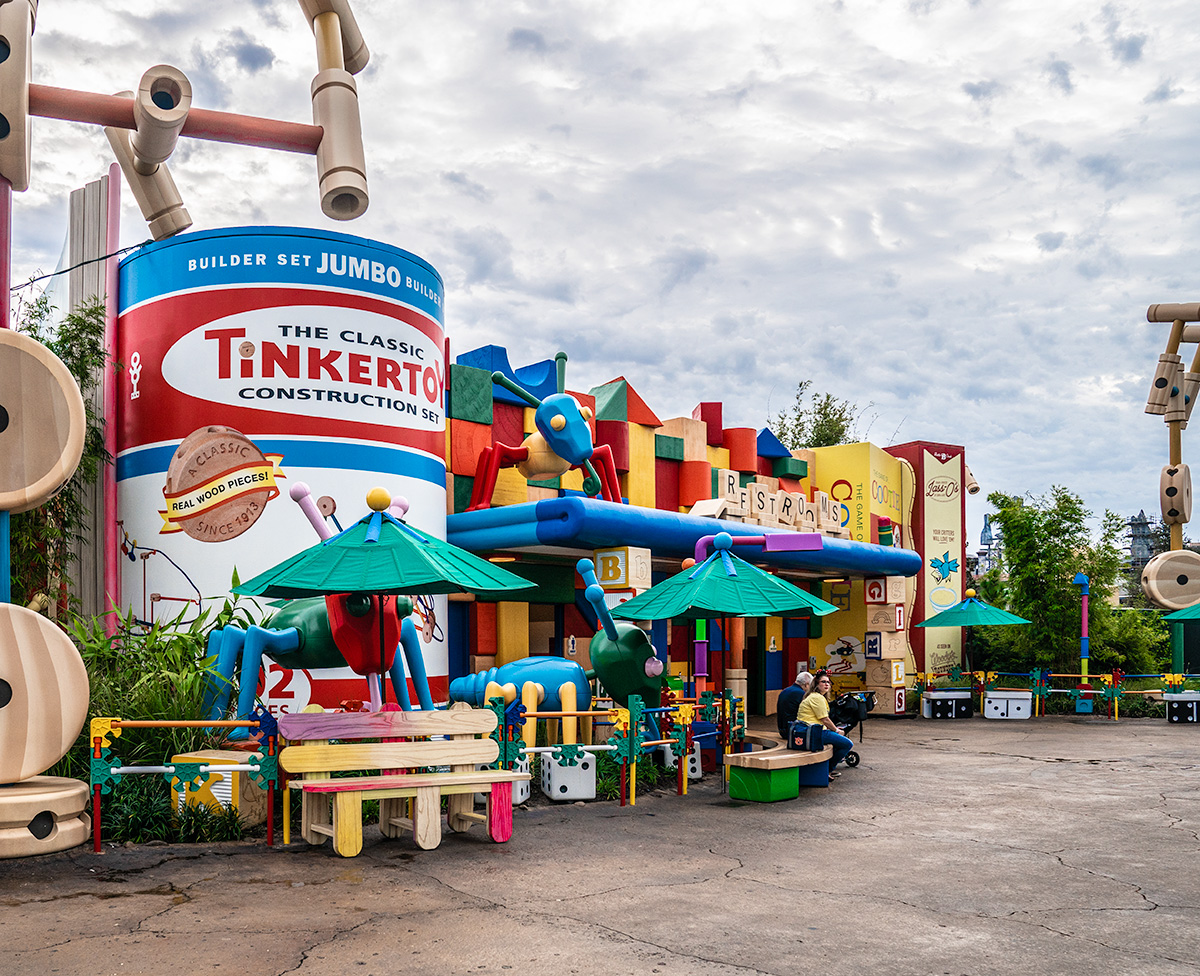 And Tinkertoy buildings that towered toward the sky.

Tru loved pointing out the multi-colored Christmas lights suspended above the roller coaster.

With Early Morning Magic, we were able to relax and breathe and just take it all in.

It’s a whole different experience to stroll through a Walt Disney World park while also enjoying a sense of space and calm and peace.

We really loved it and will always remember it!

Speaking of calm and peace, we also enjoyed the quietest quick service meal we’ve ever had at Walt Disney World.

Here’s how: breakfast is included with Early Morning Magic tickets.

Chris made a plan to do all of the rides in Toy Story Land first and then get breakfast at nine, when the park opened to the public.

His thinking was: get to all of the Toy Story rides first, before there were lines, and then do breakfast afterward.

Here’s what it’s like eating a quick service meal at Walt Disney World without the crowds:

We went straight up to the register to place our order with no wait, and we received our tray of food immediately.

We had our choice of tables (most of the restaurant was empty).

So we got our pick of a nice, cozy corner booth.

The restaurant was pristine, it was still mostly untouched by guests that early in the day.

Be First In Line For Other Attractions

Another benefit to early Morning Magic that didn’t even occur to us: we were already in the middle of the park when it opened to the public.

So it was possible for us to see a popular attraction – one that wasn’t even a part of Toy Story Land – before the crowds descended!

What happened is that after we left breakfast, we noticed a sign nearby for “Meet Mickey and Minnie Starring in Red Carpet Dreams.”

Attractions to meet Mickey and Minnie are typically one- to two-hour waits.

Chris and I didn’t want to stand in line for that long with Trevor, so we didn’t think we’d do any of those attractions during our time at Disney World. 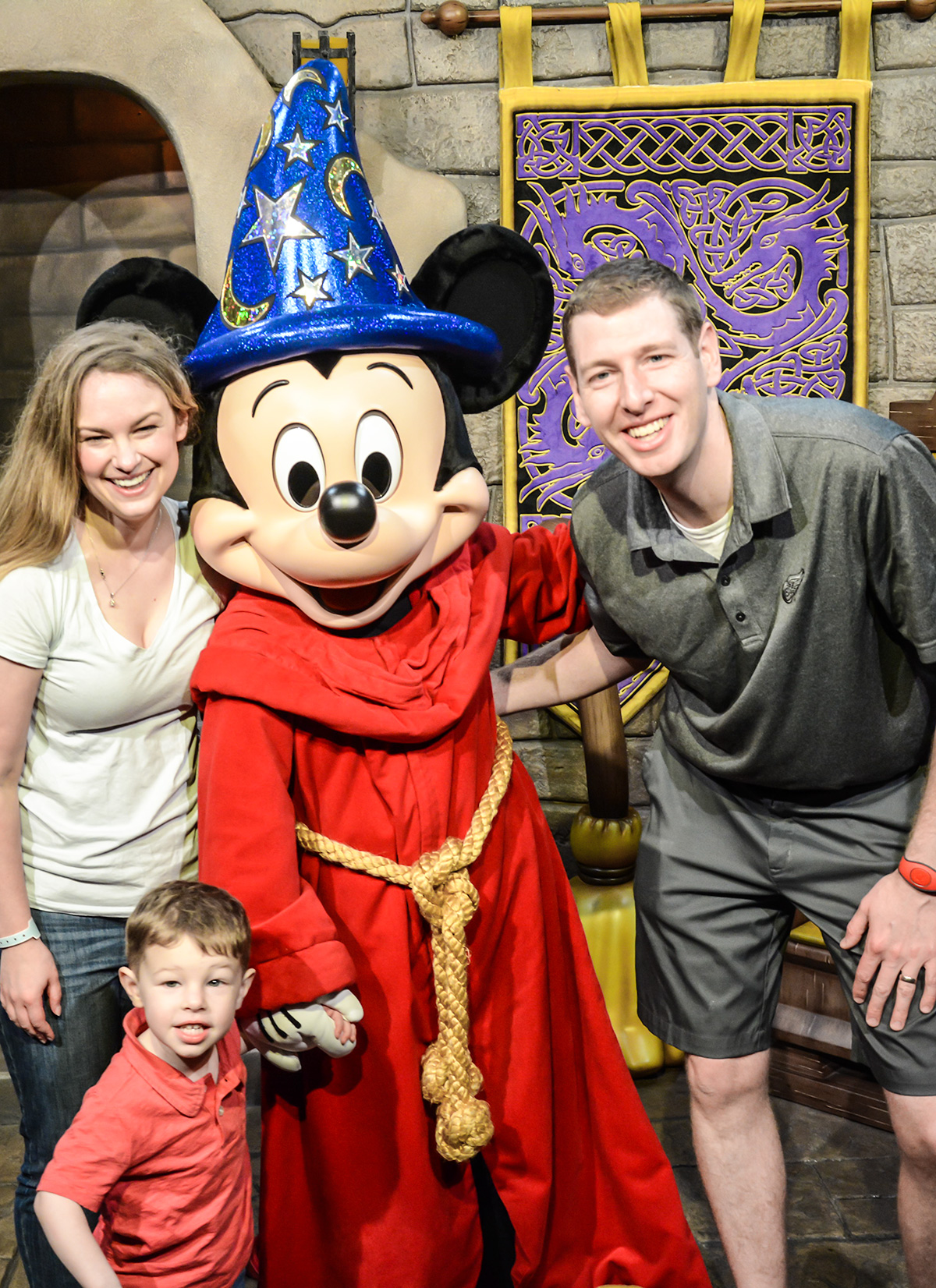 But, because of Early Morning Magic, we happened to be in the right place (the middle of the park) at the right time (just after Hollywood Studios opened to the general public).

We waited about ten minutes, and Trevor met both Mickey and Minnie.

And he was so excited!

Of course, the one downside to Early Morning Magic is the fact that it’s an additional charge on top of an already expensive park admission ticket.

But if you’re on the fence and not sure whether or not it’s really worth the price, I’d say to go for it!

Early Morning Magic was one of the top experiences from our trip.

Here are all of the details about Toy Story Land Early Morning Magic:

What Is Early Morning Magic?

Will We Avoid Lines and Crowds With Early Morning Magic?

Yes, this is the big benefit to the experience: no crowds and no lines! We waited about ten minutes for the most popular ride in Hollywood Studios, Slinky Dog Dash. We had no wait time at all for the other rides in Toy Story Land.

What Else Is Included With Early Morning Magic?

An all-you-can-eat breakfast is also included with the price. We were able to order hot items from a breakfast menu that had several options (including kid’s meal options). I ordered avocado toast and Chris and Trevor ordered pancakes with bacon. In addition to the hot items, there was also a buffet with cold cereals, milk, juice, coffee and tea, fresh fruit, yogurt, granola, and pastries.

How Do We Book Early Morning Magic Tickets?

Toy Story Land Early Morning Magic is only offered on select mornings, and you’re required to purchase a regular admission ticket to the park that day. You can book reservations on the Walt Disney World website.