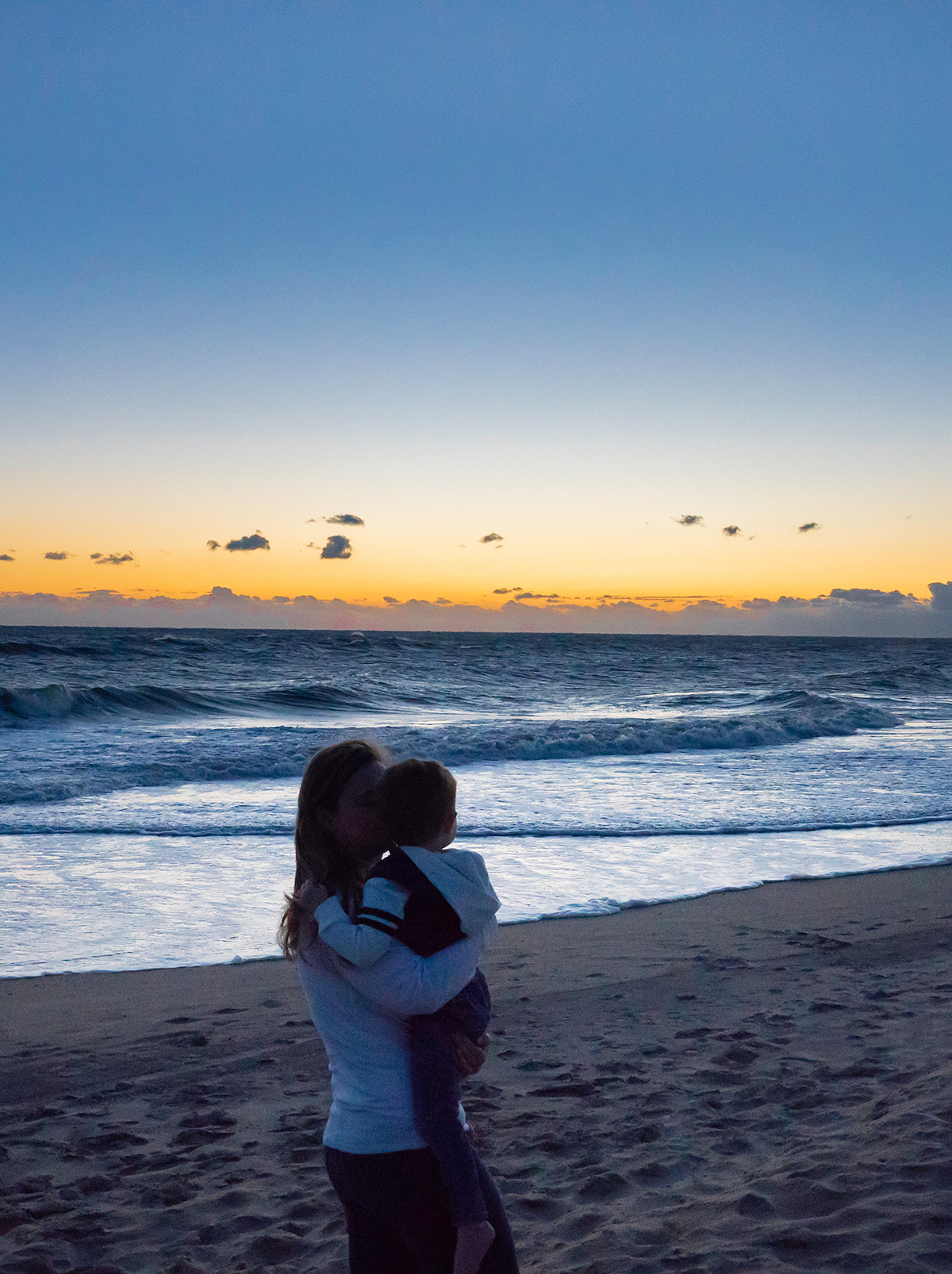 In late October, we traveled to the beaches of the Outer Banks in North Carolina.

For all three of us, it was our first time exploring to the area. Before going there, I’d barely heard of the Outer Banks. I had no idea what to expect.

Here’s how our trip to the Outer Banks went: 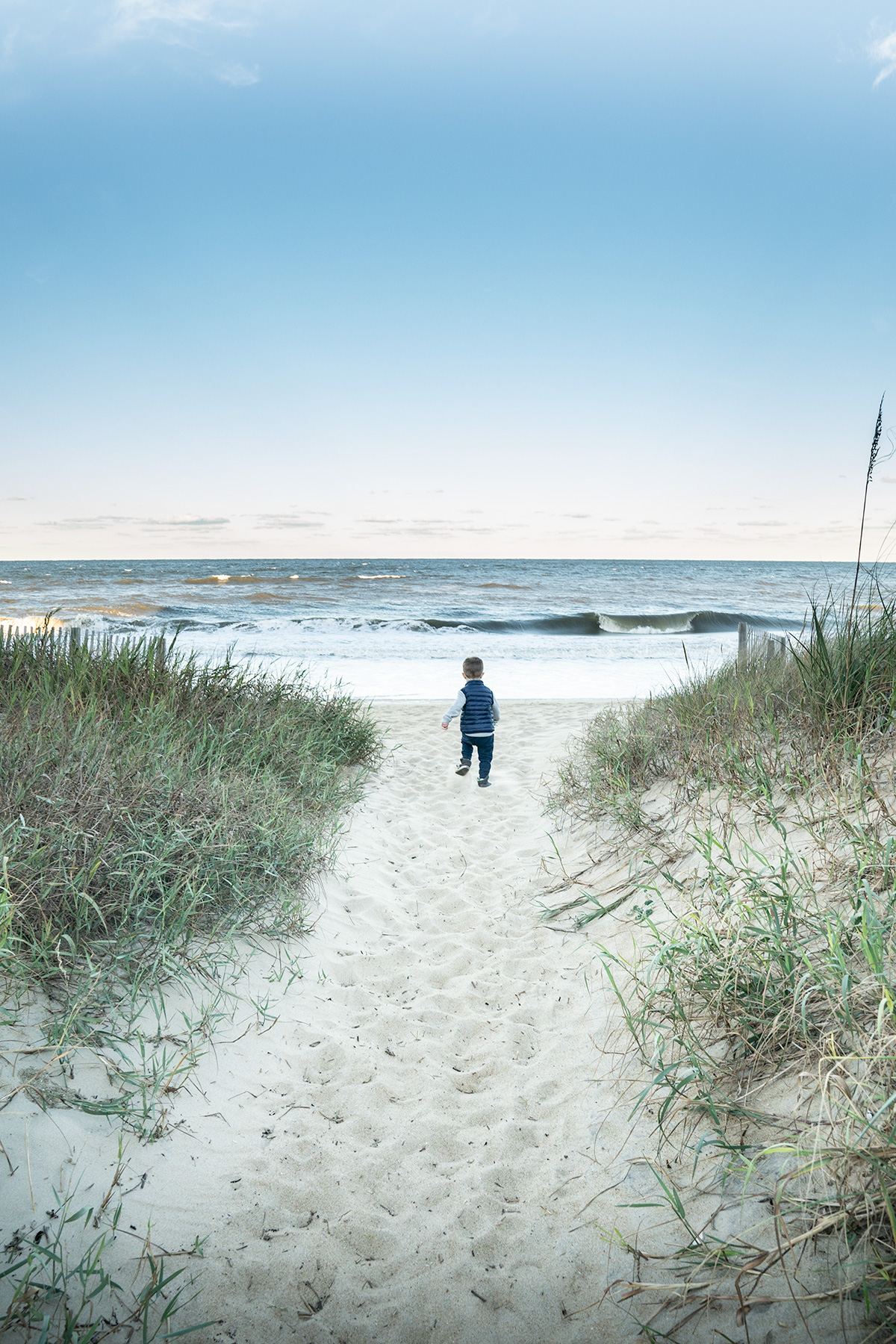 About Those Endless Beaches…

But what brought us to the area was that my good friend from college planned a destination wedding there.

Danielle told me she chose the region because the Outer Banks has some of the most beautiful beaches she’s seen.

Dee has traveled everywhere – so much more than me!  So I figured 1.) she knew what she was talking about and 2.) we were in for a treat. 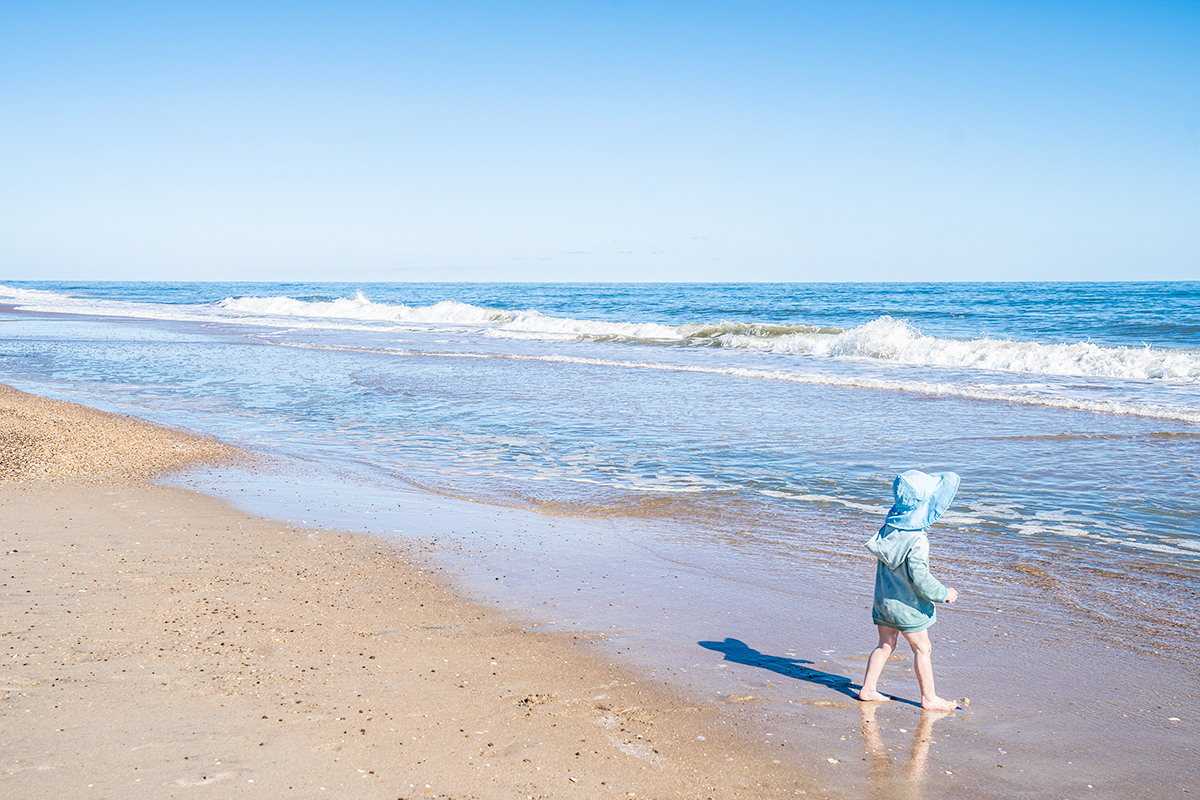 And she was right.

The Outer Banks region really is something special. 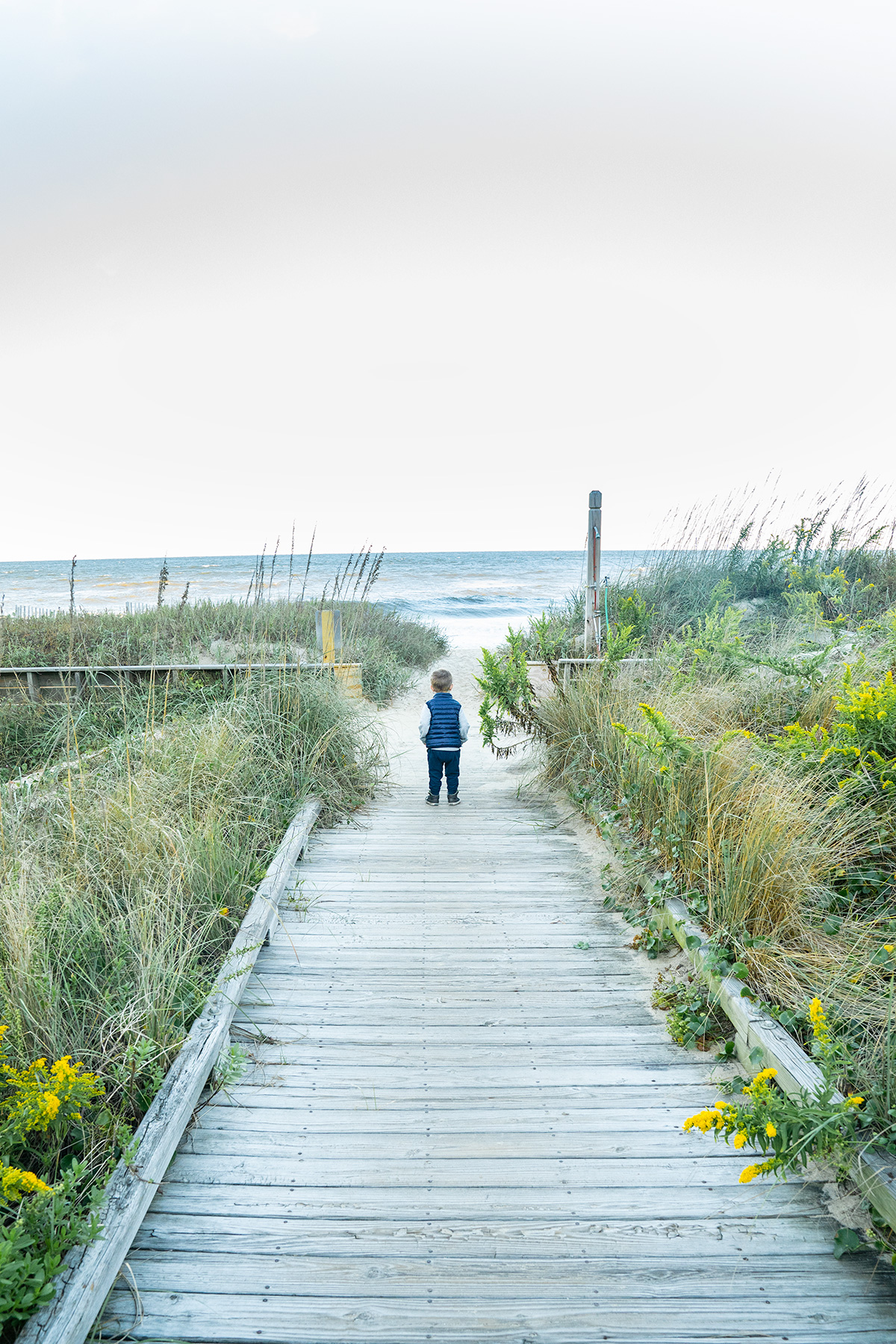 It feels as though you could walk the beautiful Atlantic shores for miles and miles on end. 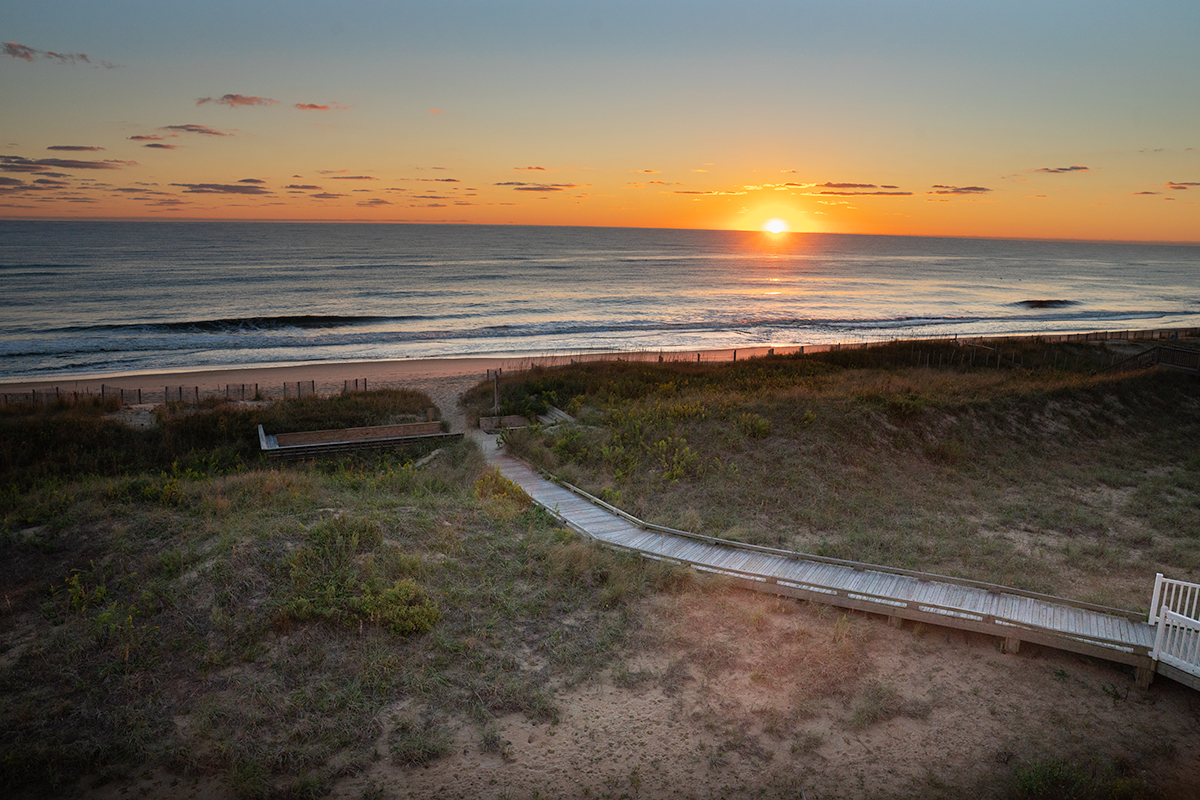 I definitely had a feeling of being a part of pure Mother Nature here.

It’s possible to see wild horses in this region, as well as sea turtle hatchlings. My friend, just sitting on the beach, saw dolphins leaping through the ocean. 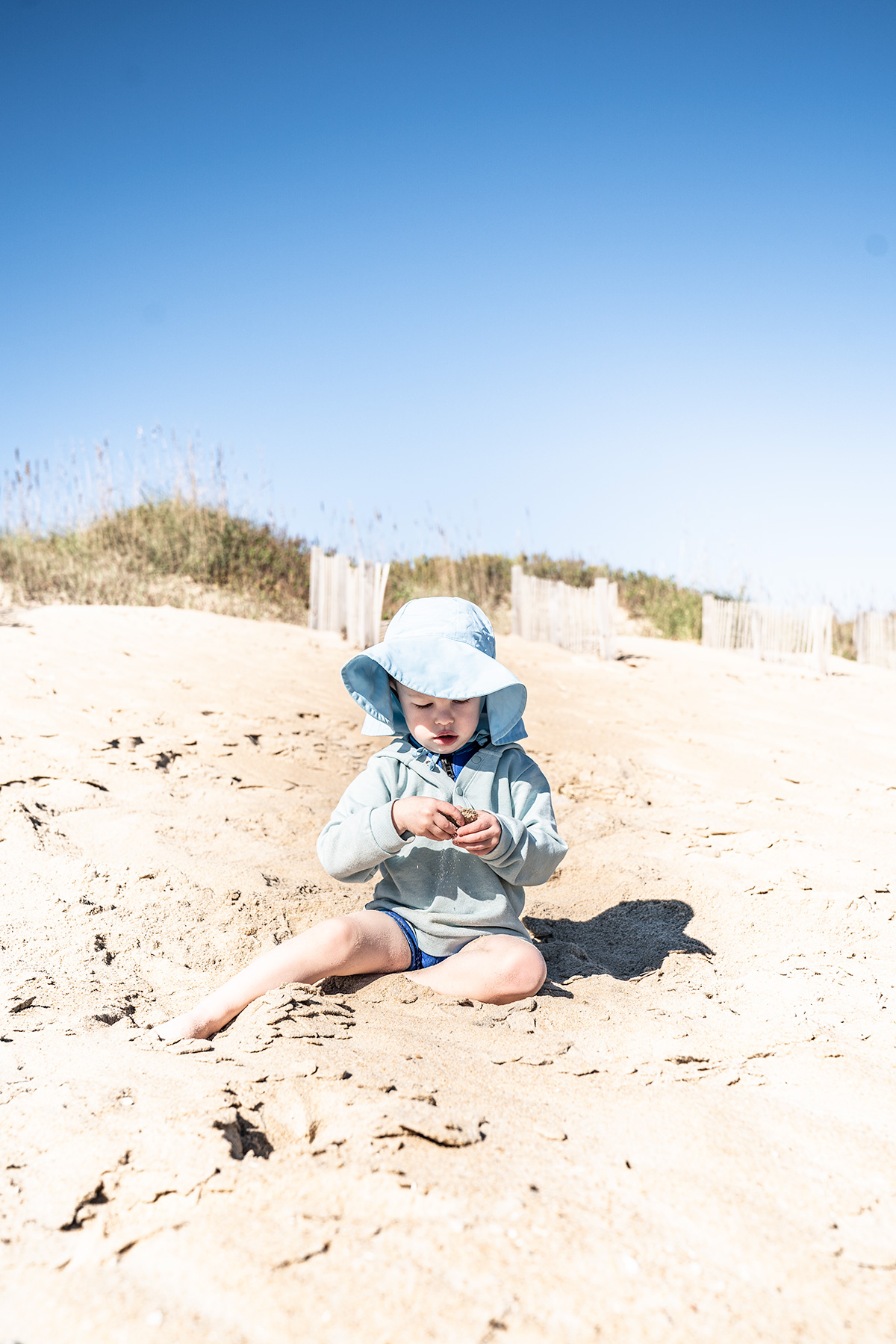 Trevor loved the beaches too.

He loved running in the sand.

He loved rolling in the sand. 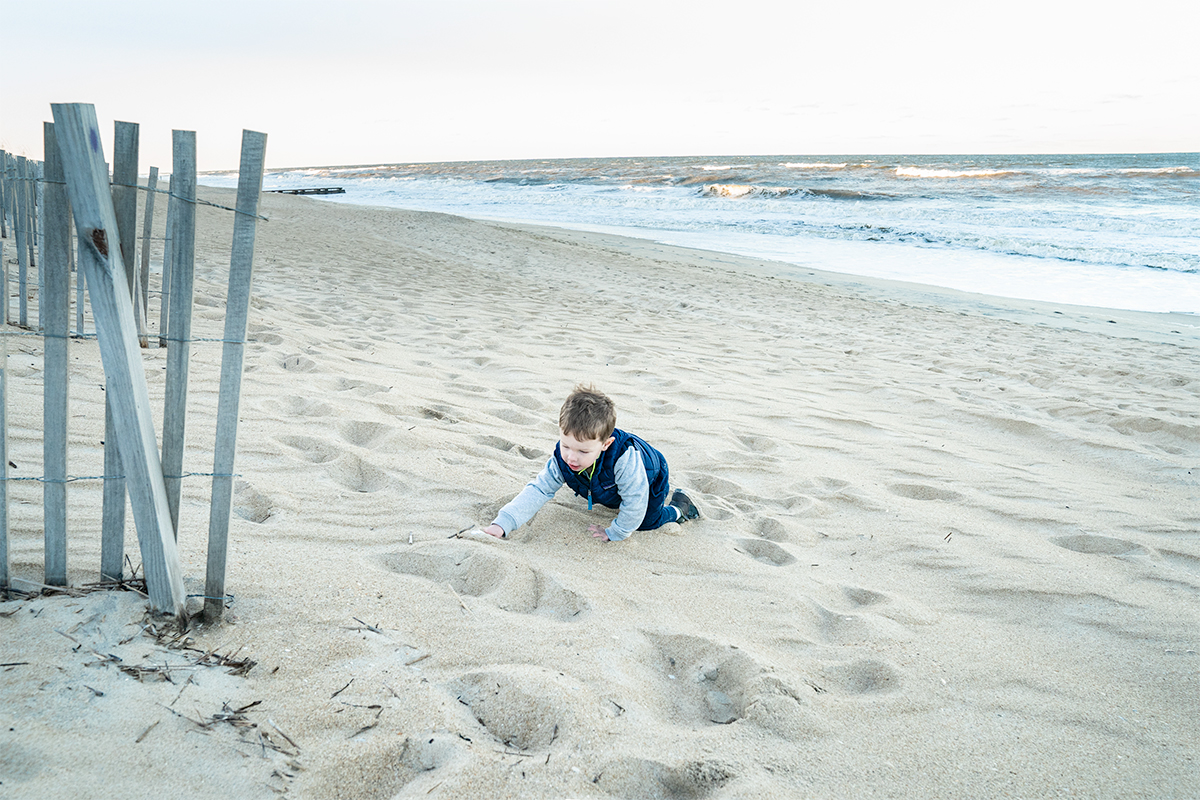 Mostly he loved driving his toy cars through the sand, making miniature car tracks to match his miniature footprints. 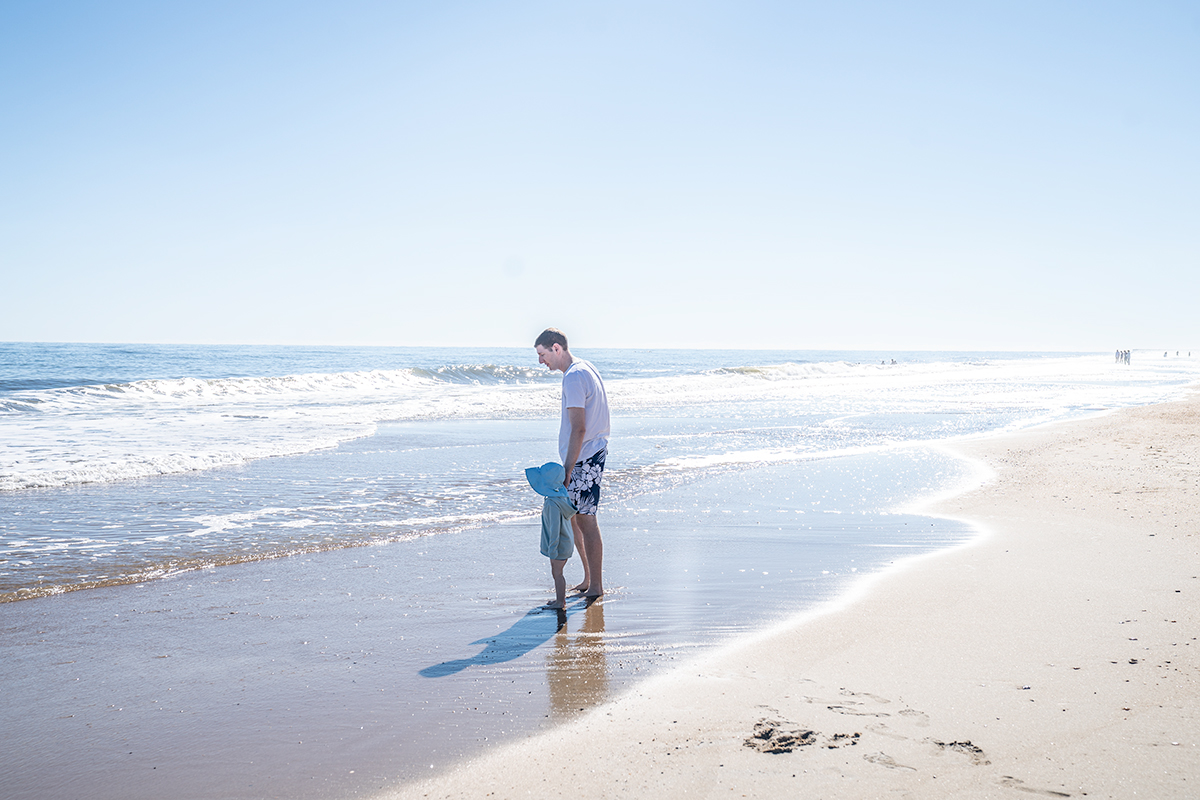 He loved wading into the ocean too.

In late October, the weather was never hot and the ocean definitely wasn’t warm. But Tru never seems to be bothered by the cold when he’s having fun splashing! 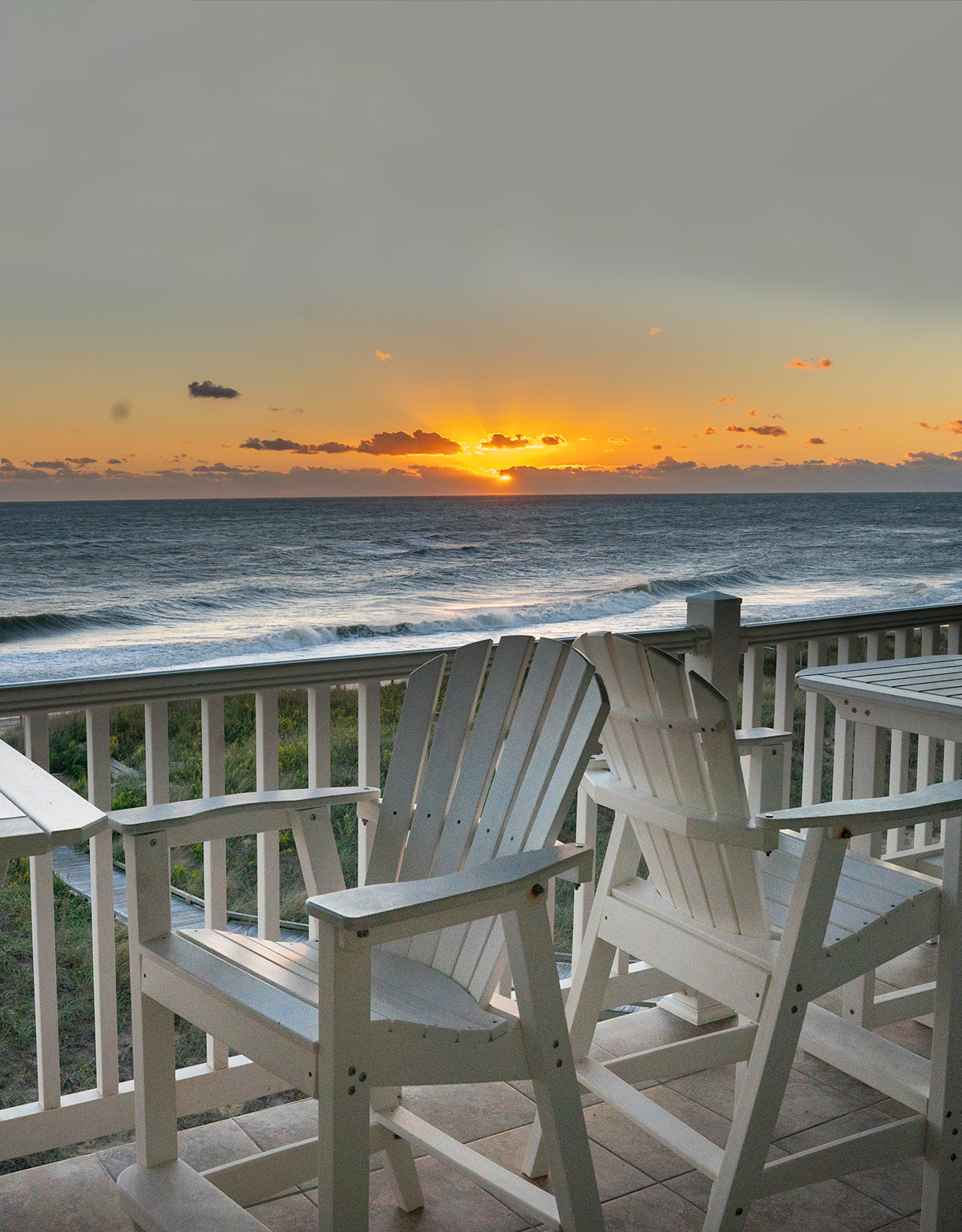 Another thing Trevor loved about this trip: being the elevator operator.

Our condo was on the third floor of the building where we stayed, so we used it a lot.

He insisted on pressing the buttons every time.

And he got anxious if he saw other people approaching, because he was afraid they might try to press the buttons before he could (“no people! no people!”)

He quickly learned what each of the buttons meant, and knew what to press for wherever we were headed: “G is garage, 3 is room, 1 is beach.”

One funny thing: after we returned home and got into an elevator in the Boston airport, Tru said “1 is beach.” I had to sadly inform him, “sorry Tru, 1 isn’t the beach everywhere.” 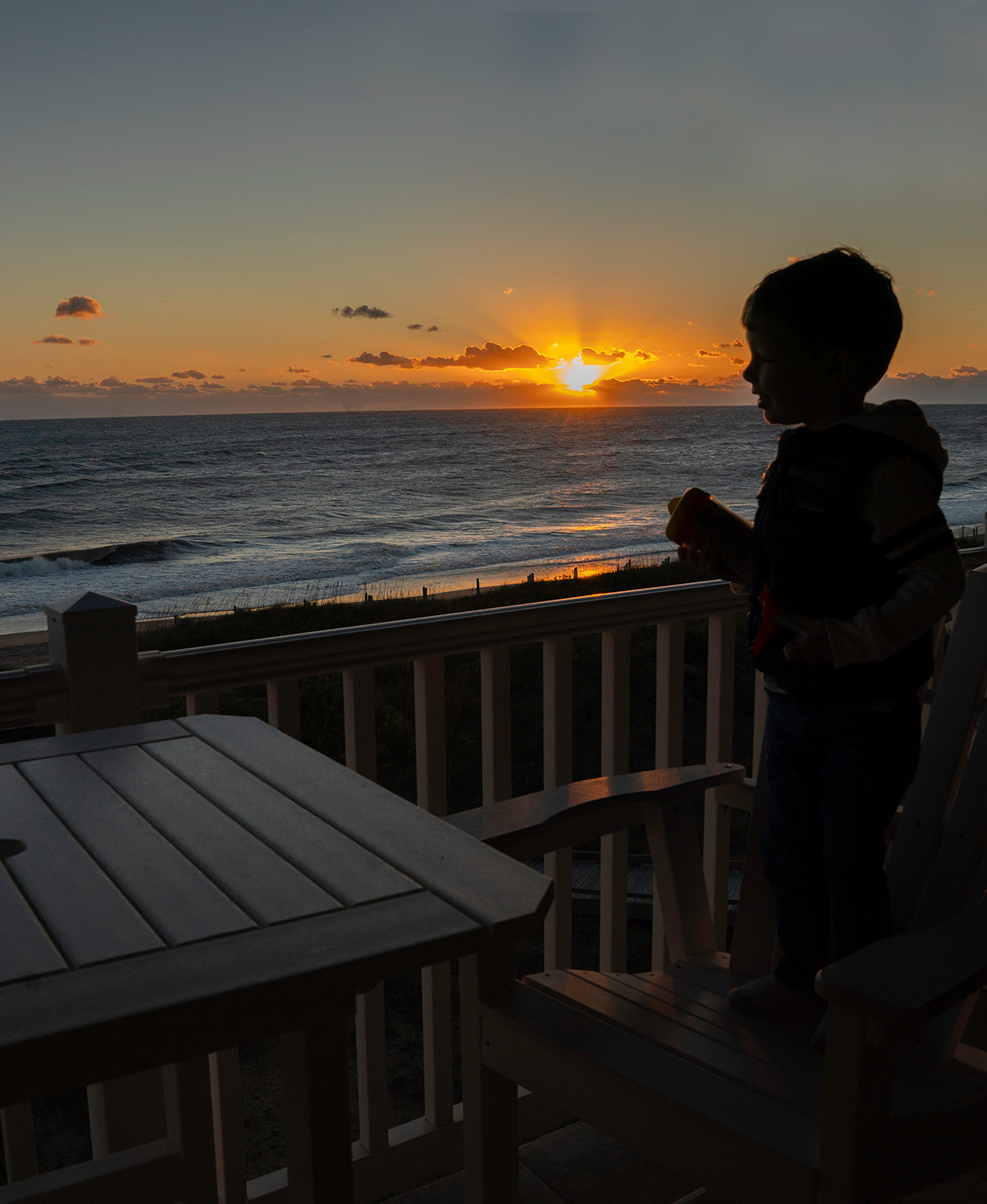 We also had a lot of fun playing mini golf one night at Lost Treasure Golf in Kill Devil Hills.

It was a chilly night in the off-season, so we were one of the few families on the course.

When we play mini golf with Tru, we never bother to grab a scorecard anymore.

Here’s why: the game just doesn’t make any logical sense with a toddler.

For instance, I’ll take one shot. Then Tru will run to the ball, pick it up, walk over to the hole, and drop the ball in.

And Chris and I really have to be on our toes, because Tru could very easily stumble over a rock and tumble into a waterfall. So we’re always at least halfway distracted.

Sometimes, Trevor wants to veer way off course, returning to Hole 3 when we’re at Hole 10 for example, and a melt-down will occur. At that point, we’ll normally skip ahead several holes to distract him. 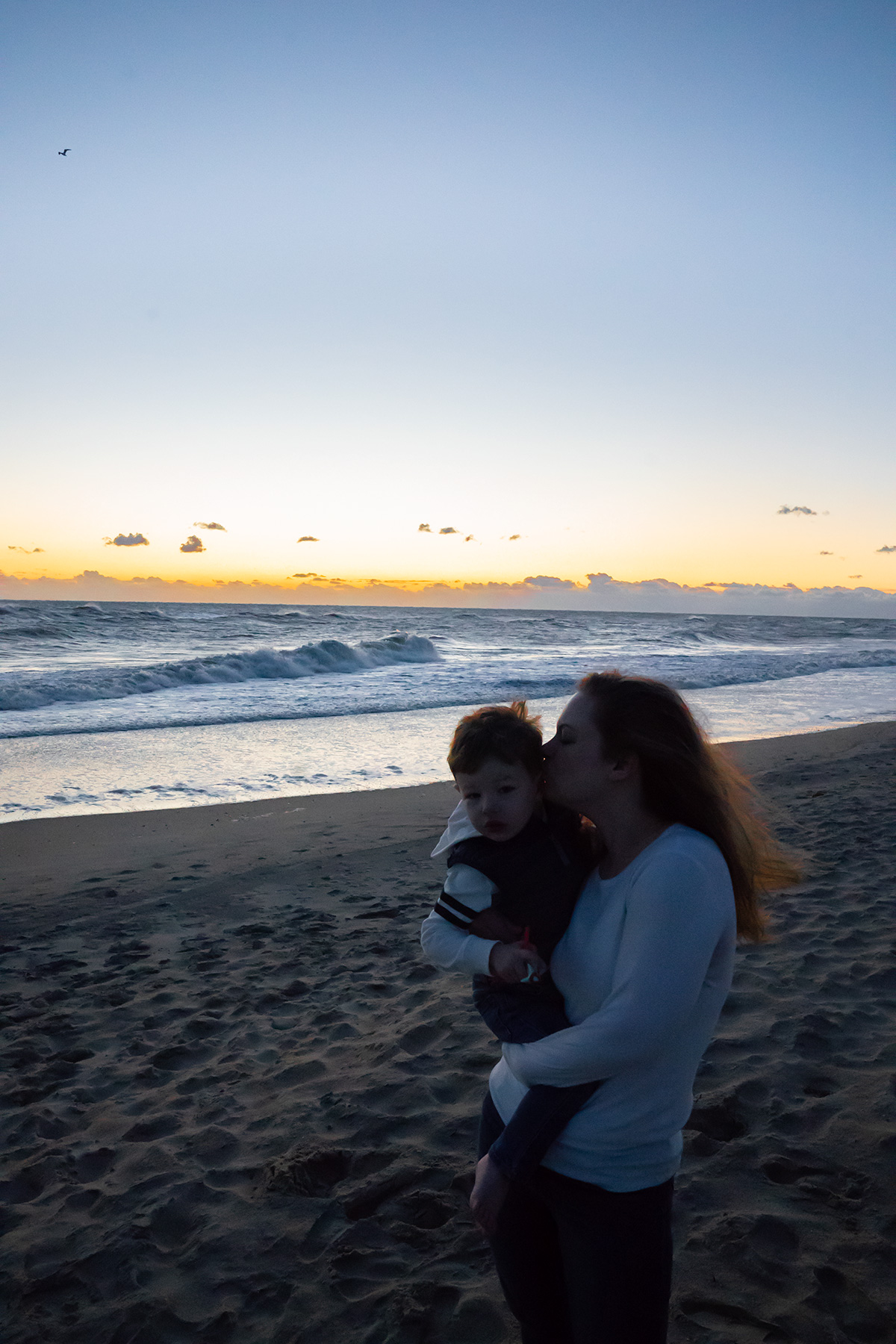 It was really special for me to introduce my best college friends to Trevor for the first time.

I love my college friends so much.

But my biggest surprise from the trip was how much Trevor adored them too! 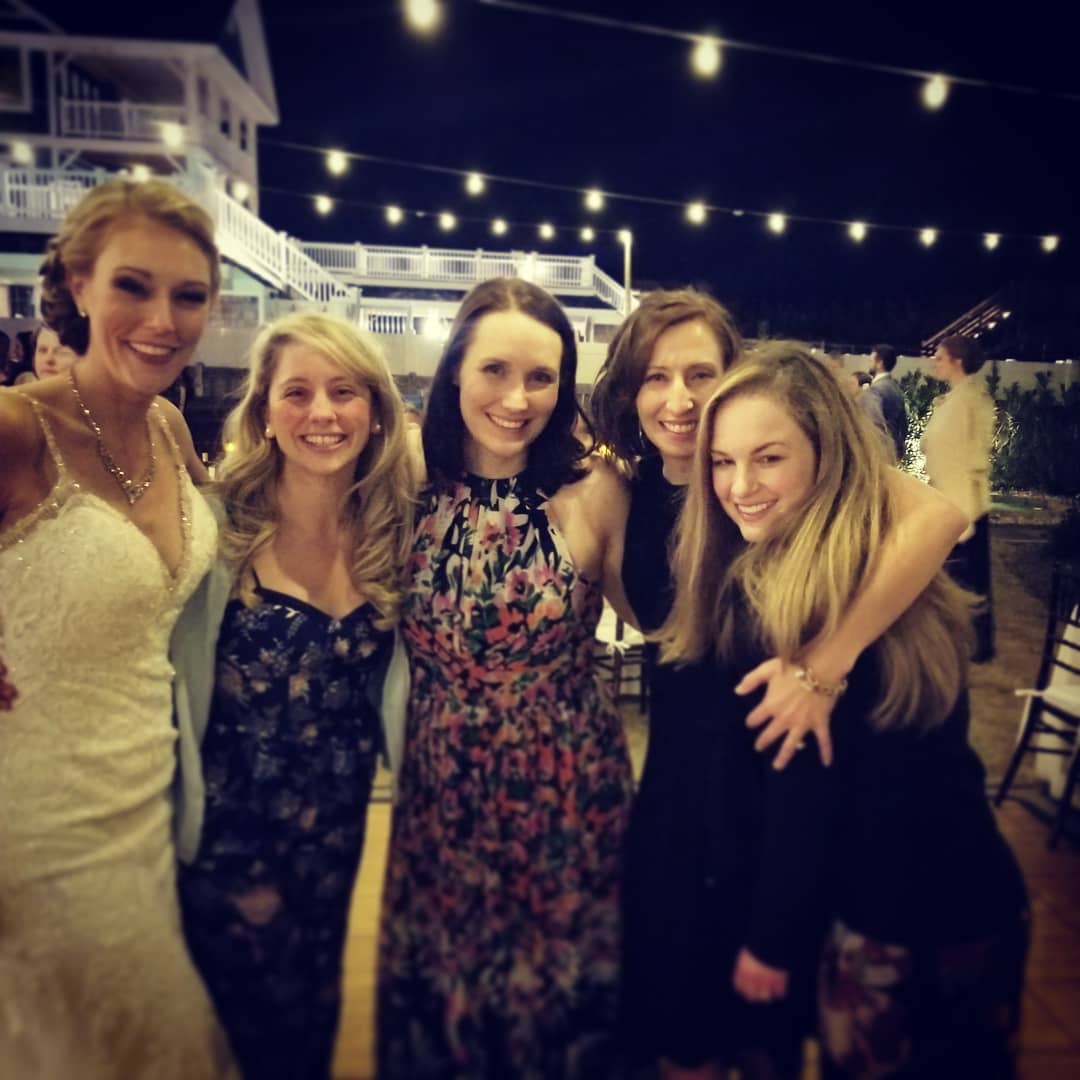 All of my friends were staying in what I’d call a “beach mansion.” The house was so enormous, it had a name: “Atlantis.”

Chris, Trevor, and I, meanwhile, booked a condo that was a five-minute drive away. Whenever we were back at our condo Tru would randomly say “go see Mama’s friends now.”

And I understand why: there was a lot of laughter at Atlantis. And there were a million fun things for Trevor to do!

I didn’t take photos during our time visiting, but here’s the listing for Atlantis if you’re curious.

It looks insanely expensive (!) but if you divide the weekly cost among 24 couples (for each of the 24 bedrooms), the prices are actually affordable.

I guess massive beach houses are commonplace on the Outer Banks and they’re rented out by big groups for family reunions and weddings.

Trevor Walks Down the Aisle!

Dee invited Tru to carry a “Here Comes the Bride” sign down the aisle for the wedding ceremony. He would be one of three toddler boys helping to carry the sign.

So Trevor got to be in his first wedding! 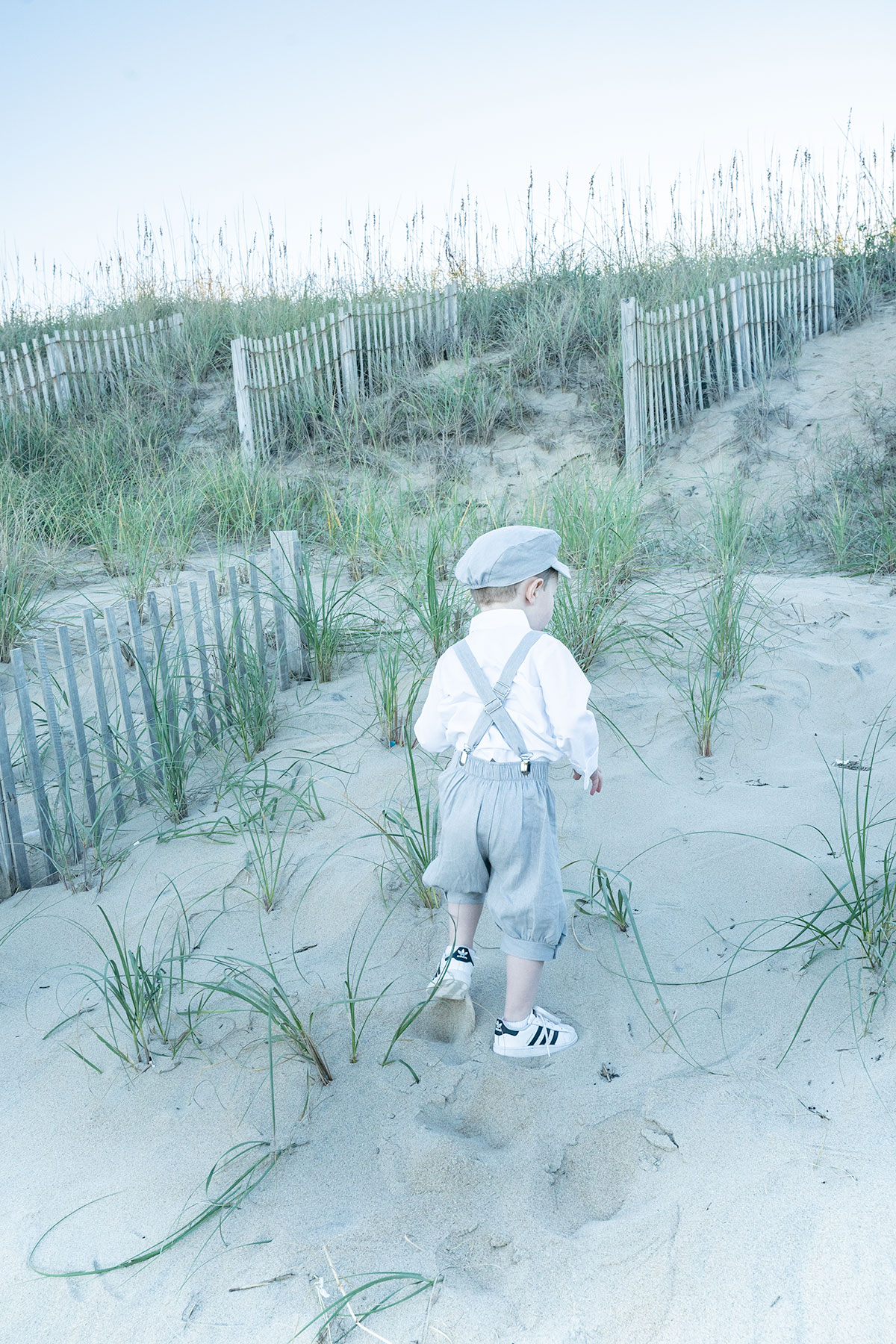 I have to say though, right up until moments before he walked down the aisle, things weren’t looking great.

Trevor took a nap before the wedding and woke up on the wrong side of the pack n’ play.

He awoke sobbing, and we had no idea why.

After he finally calmed down, I was afraid he’d refuse the outfit. It had a lot of accessories that were unfamiliar to Tru: a bow tie, suspenders, and hat.

But he wore it all without any complaints. 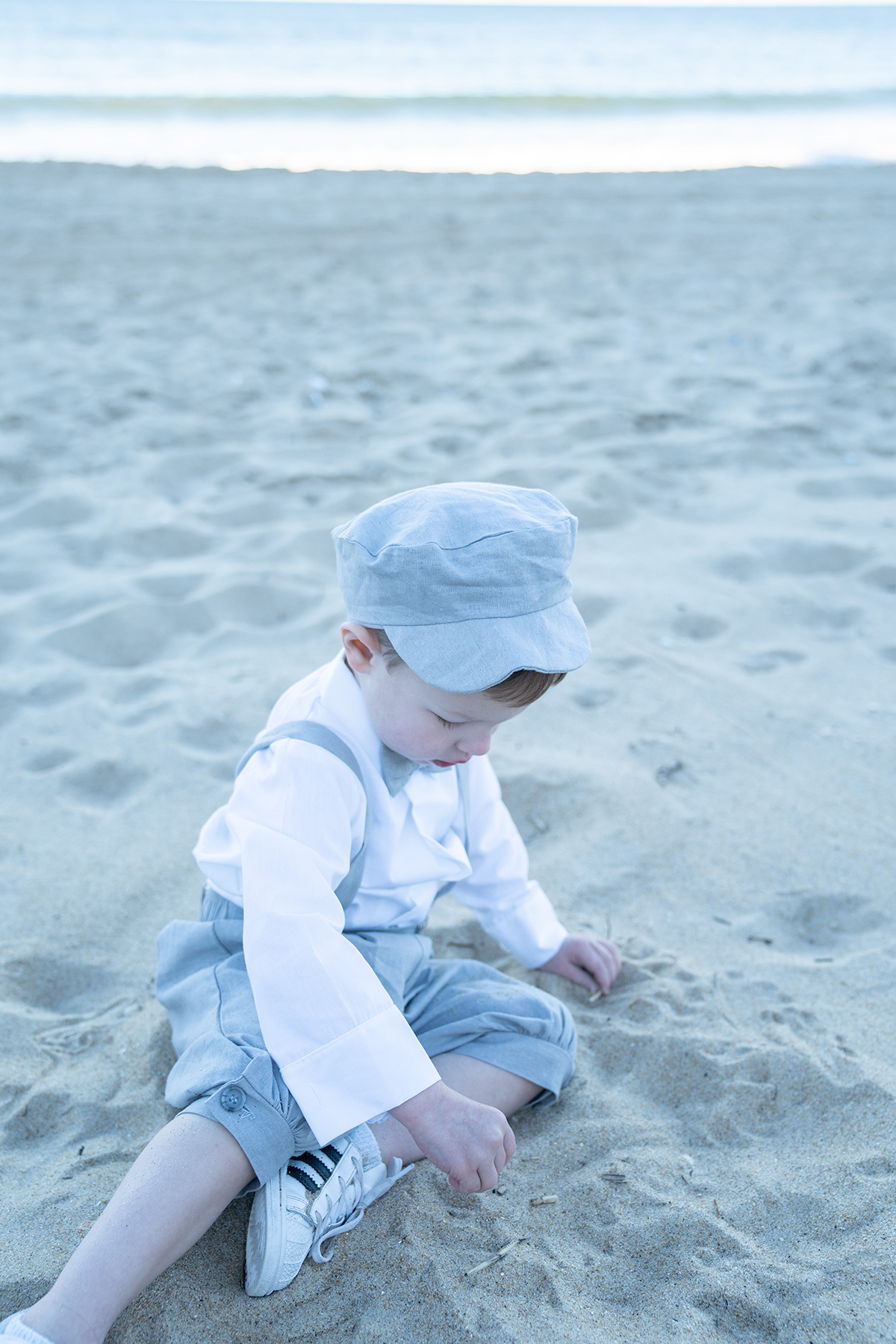 The one thing he absolutely refused: dress shoes.

We were running late and I didn’t want any more sobbing, so Trevor ended up in Adidas sneakers with his wedding outfit. 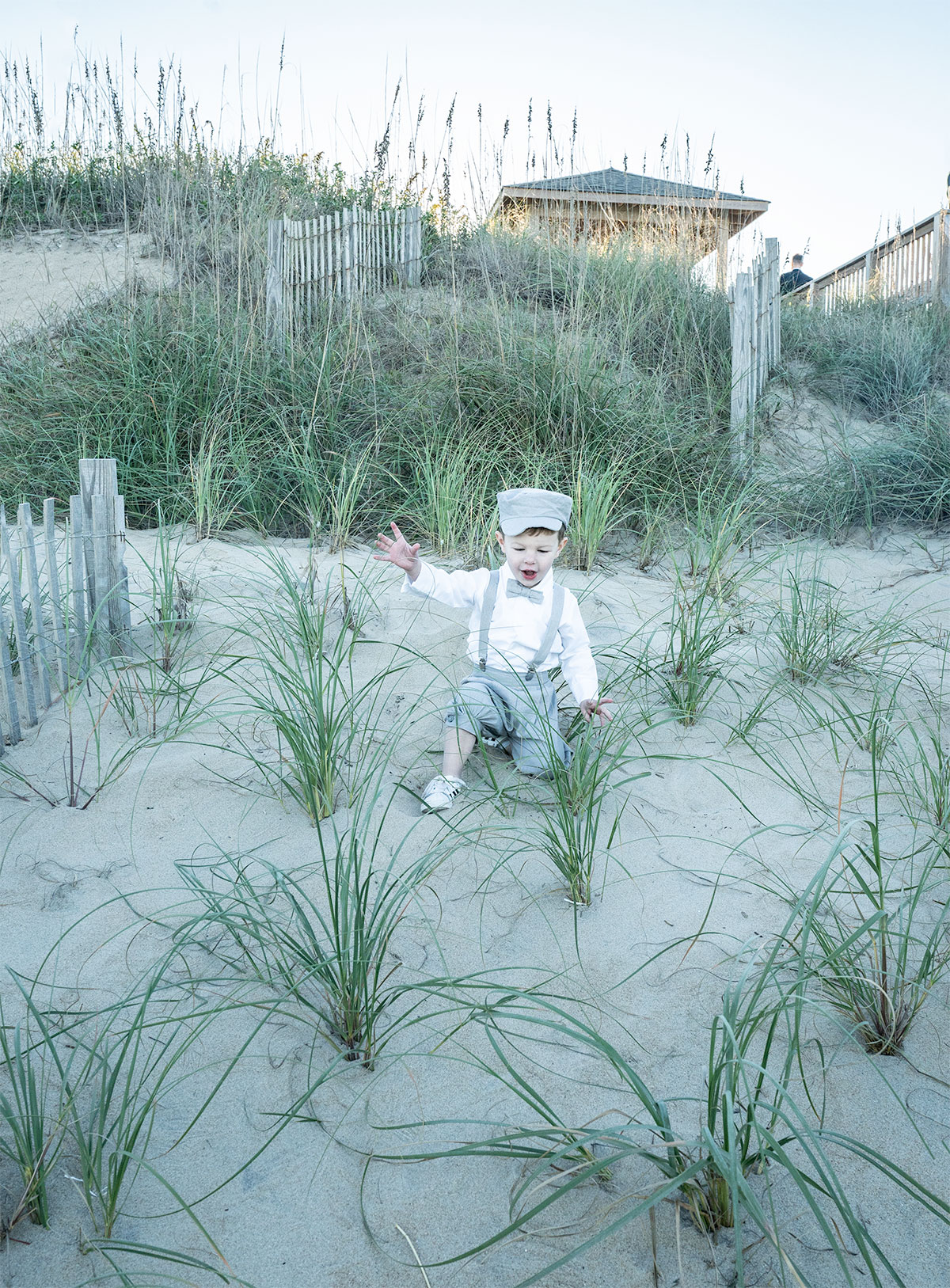 Right before the wedding, we met up with the other boys, and the other two-year-old was crying.

His mom was in the wedding party and I think he hated being separated from her. 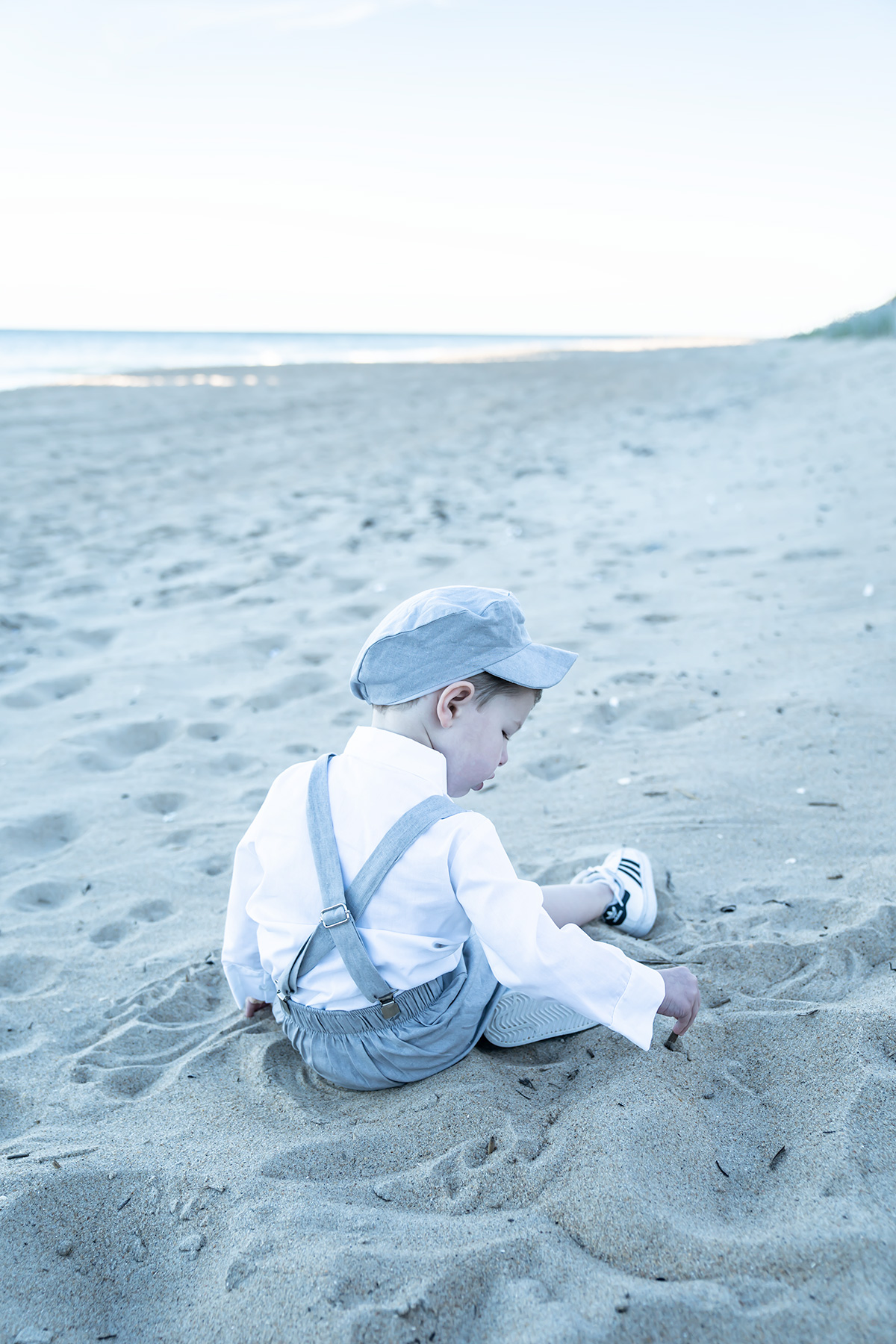 Moments later, though, it was go time. 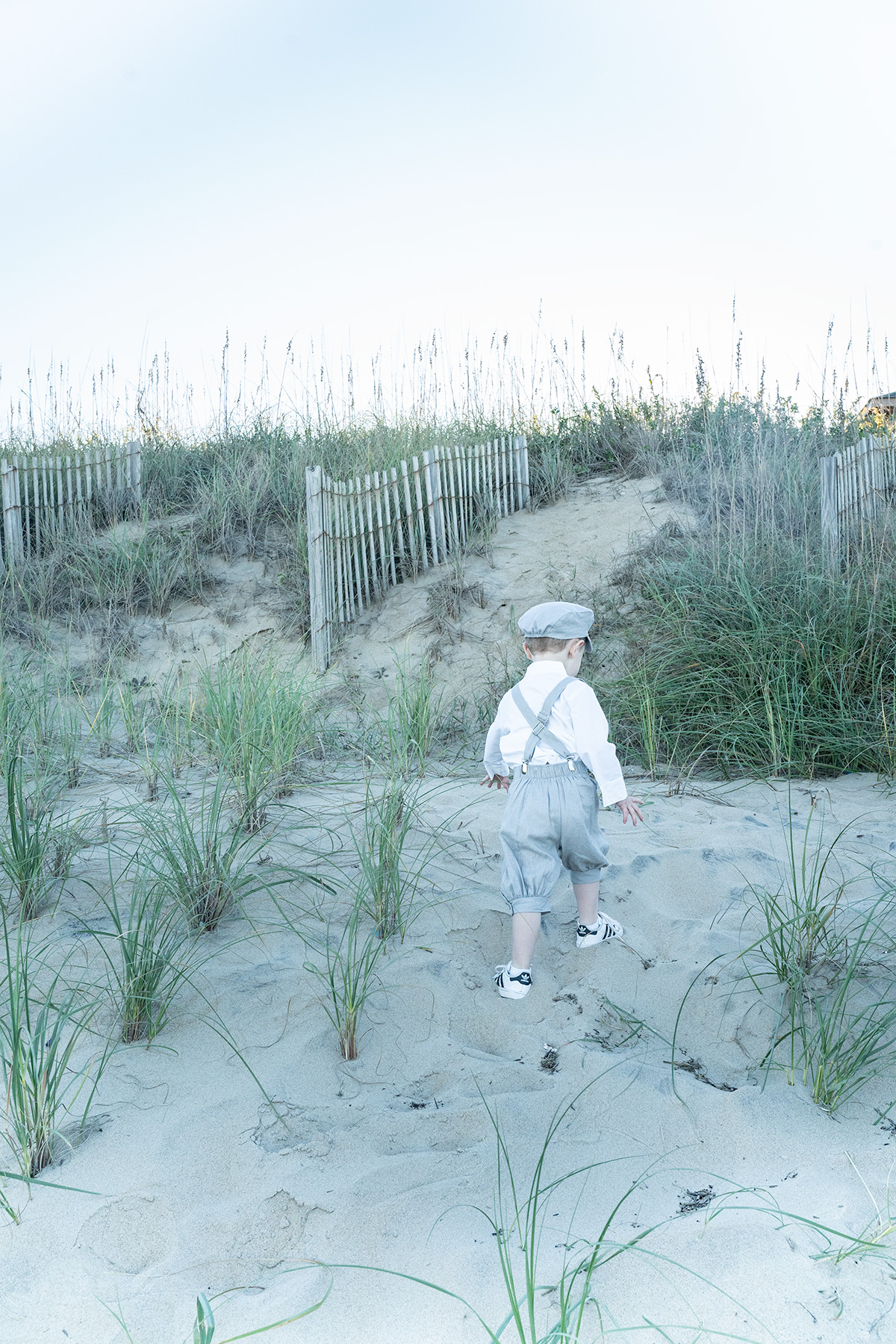 Each of the three boys held a section of the sign and walked proudly down the aisle. 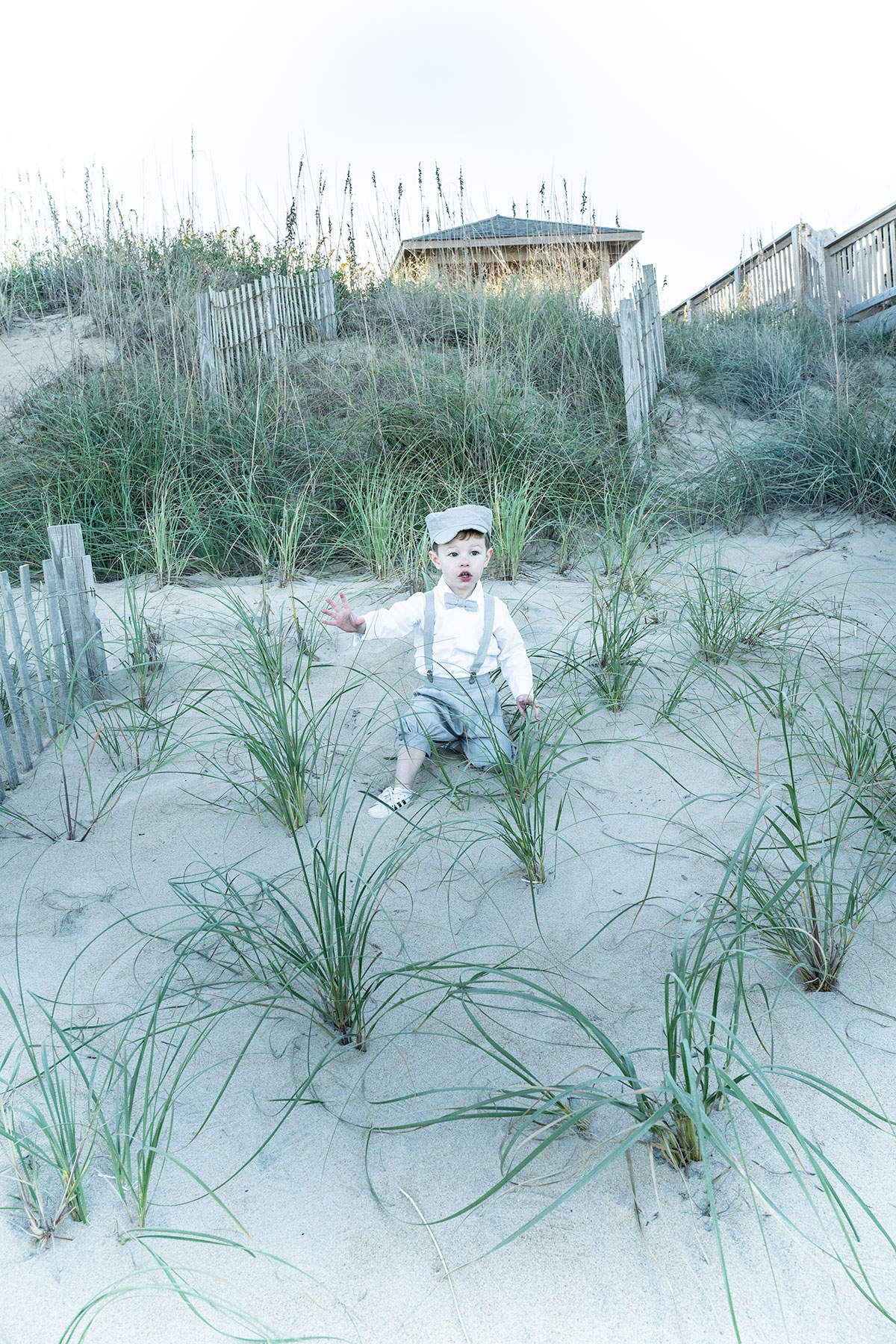 They all did great: no tears, lots of smiles.

Everything was fine in the end. 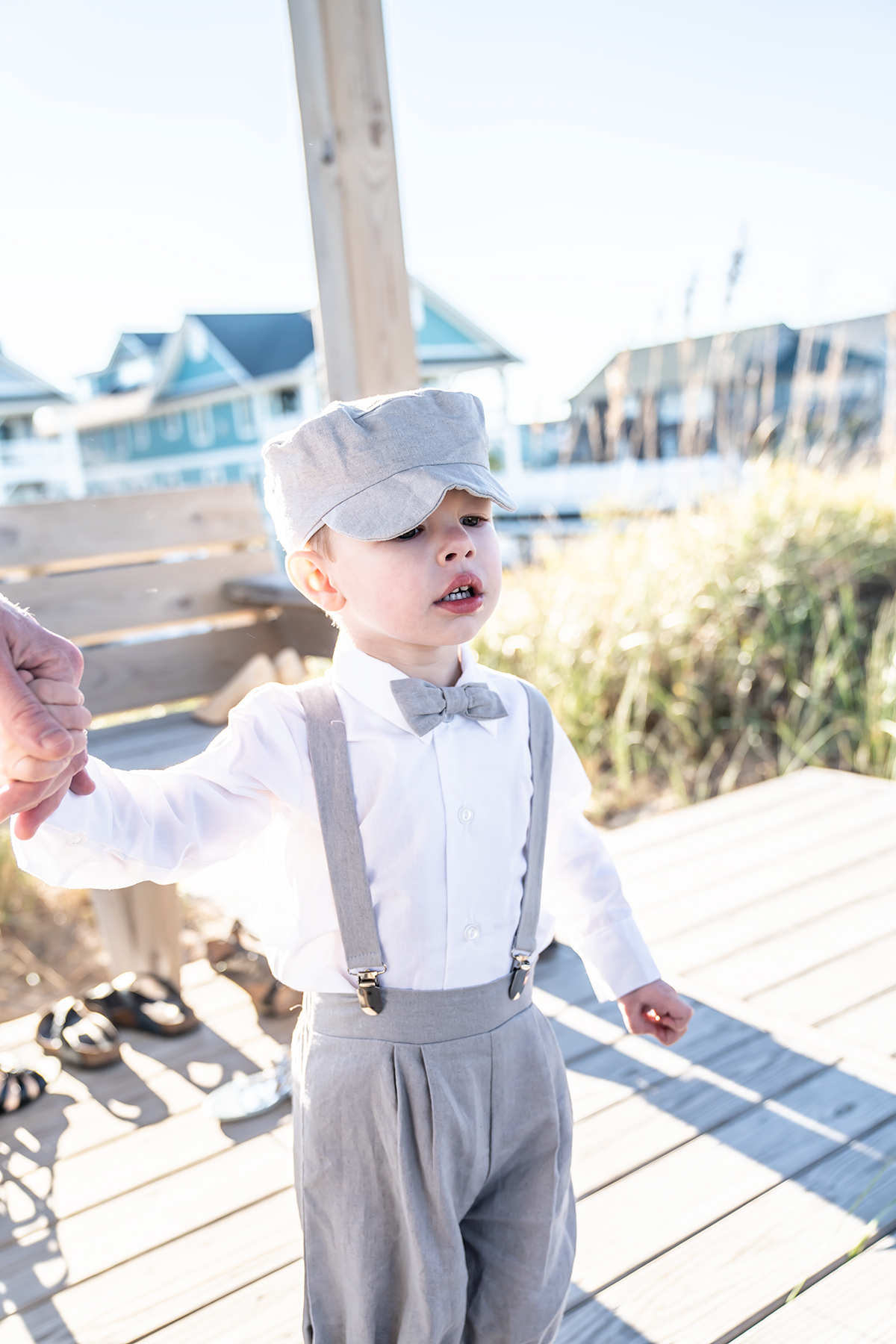 One funny thing: we hadn’t made it to the Outer Banks in time to attend the rehearsal.

So when Trevor arrived at the end of the aisle, he didn’t know what to do. He turned, retraced his steps, and ran back up the aisle the way he came!

It was cute. He got plenty of “awwwwws” from the guests. He did a great job! 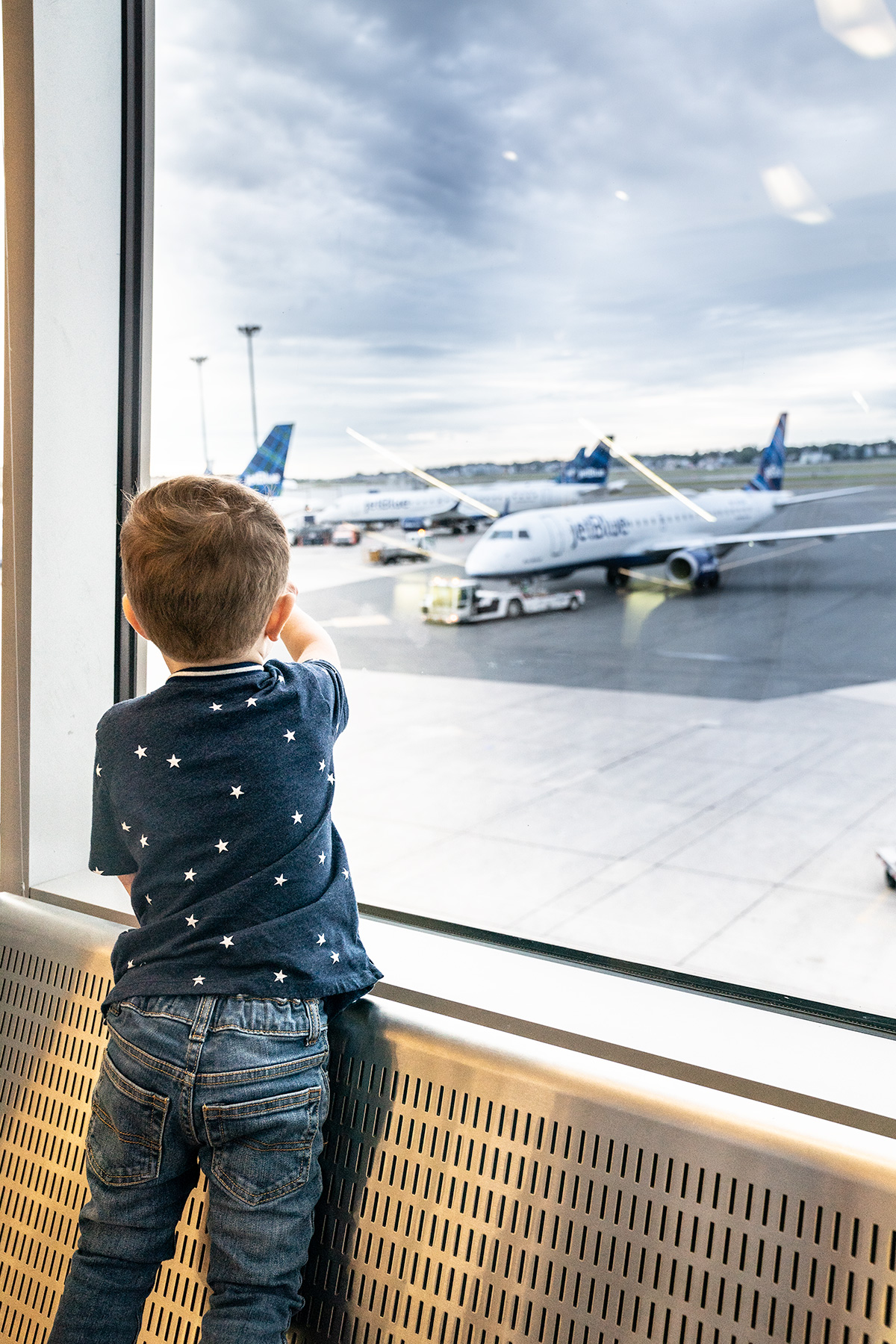 I typically don’t have issues with flying.

For all my life, I’ve hopped on planes without a second thought.

Things were different this time around!

What happened is that there was some nasty weather (wind and rain from the remnants of a hurricane) that was passing through New England at the same time we were scheduled to fly into Boston.

For the first time in my life, I worried about our safety on the plane.

I think the original thought that started the whole thing was, “could I be putting my son in danger?”

I started feeling anxiety about that flight the day before we were scheduled to fly, as soon as we learned about the weather forecast.

By the time we were all seated – seatbelts buckled – and the plane was taking off, I was literally trembling with fear.

My whole body was freezing and shivering, even though the plane wasn’t cold.

My stomach clenched into tight knots.

I felt hungry, but couldn’t eat.

I definitely couldn’t concentrate on the words of the book I had brought along.

I started feeling tortured by thoughts like “I’m not in control here. I can’t control what happens on this plane,” and “we’re trapped here in these plane seats! There’s no way out, no matter what!”

I felt like I needed to stand up and pace, do something to shake off the nervous energy. But of course, I was stuck in my plane seat.

In the moment, I truly felt like I never wanted to fly, ever again. By the time we landed, I fully grasped the meaning of the phrase “I wanted to kneel down and kiss the ground.”

I don’t know what will happen on future flights. Will I continue to feel this anxiety next time? Will it get worse?

We have a 3 1/2 hour flight booked in December, so hopefully I’ll figure out a way to handle it by then.

Anxiety is a much stronger force in my life since becoming a mom. Finding ways to cope seems my never-ending struggle. 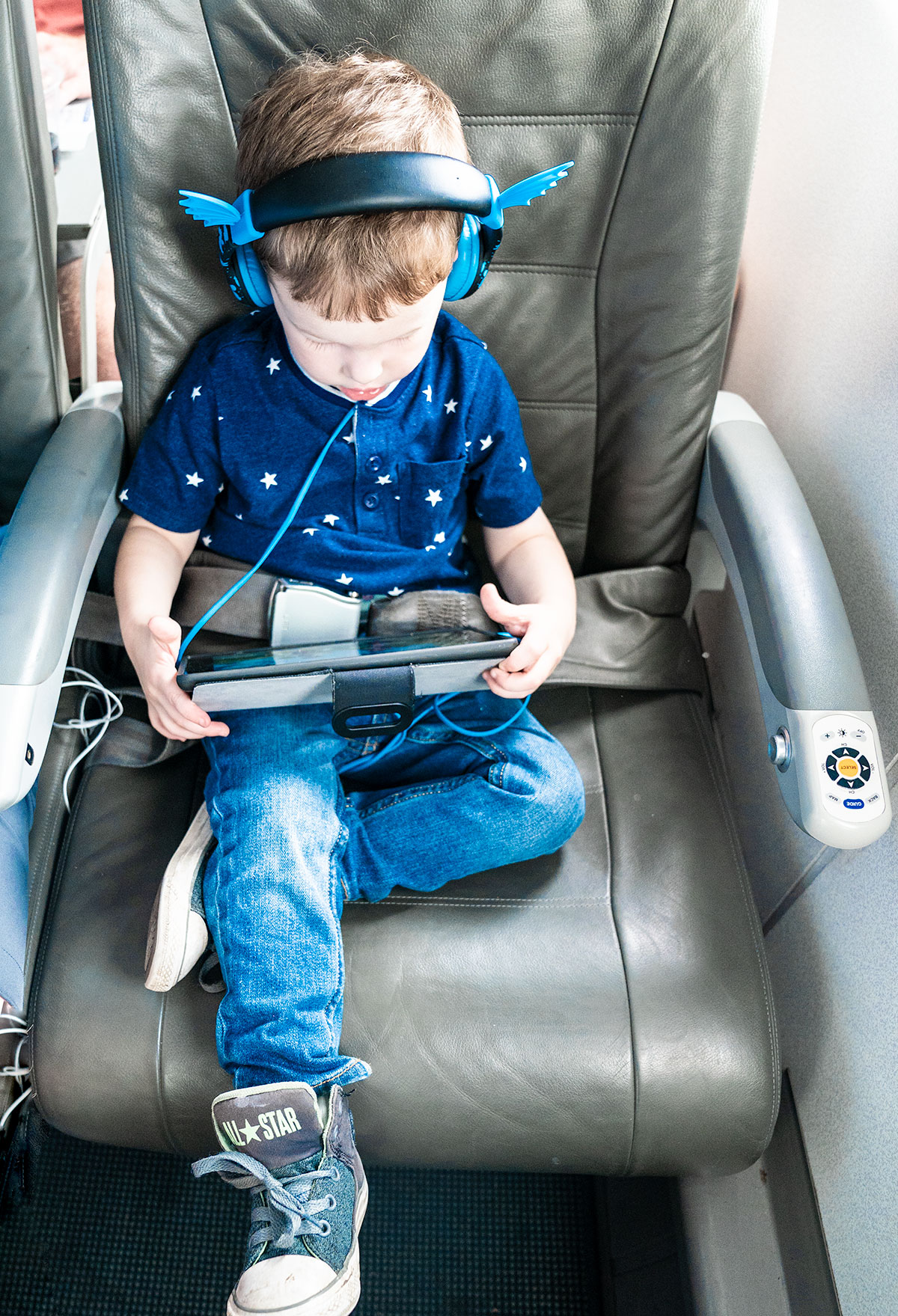 Trevor, on a brighter note, was happy as could be for the entire flight!

He’s certifiably addicted to a series of videos on YouTube that he calls “tolor tars” (i.e. “color cars”)

Toddlers, apparently, find it fascinating. Most of the videos have millions of views.

Normally, we allow Trevor about ten minutes per day of “tolor tars.” On the plane, Trevor can watch for as long as he wants. So he sat happily for the length of the flight watching those videos, munching on plane snacks.