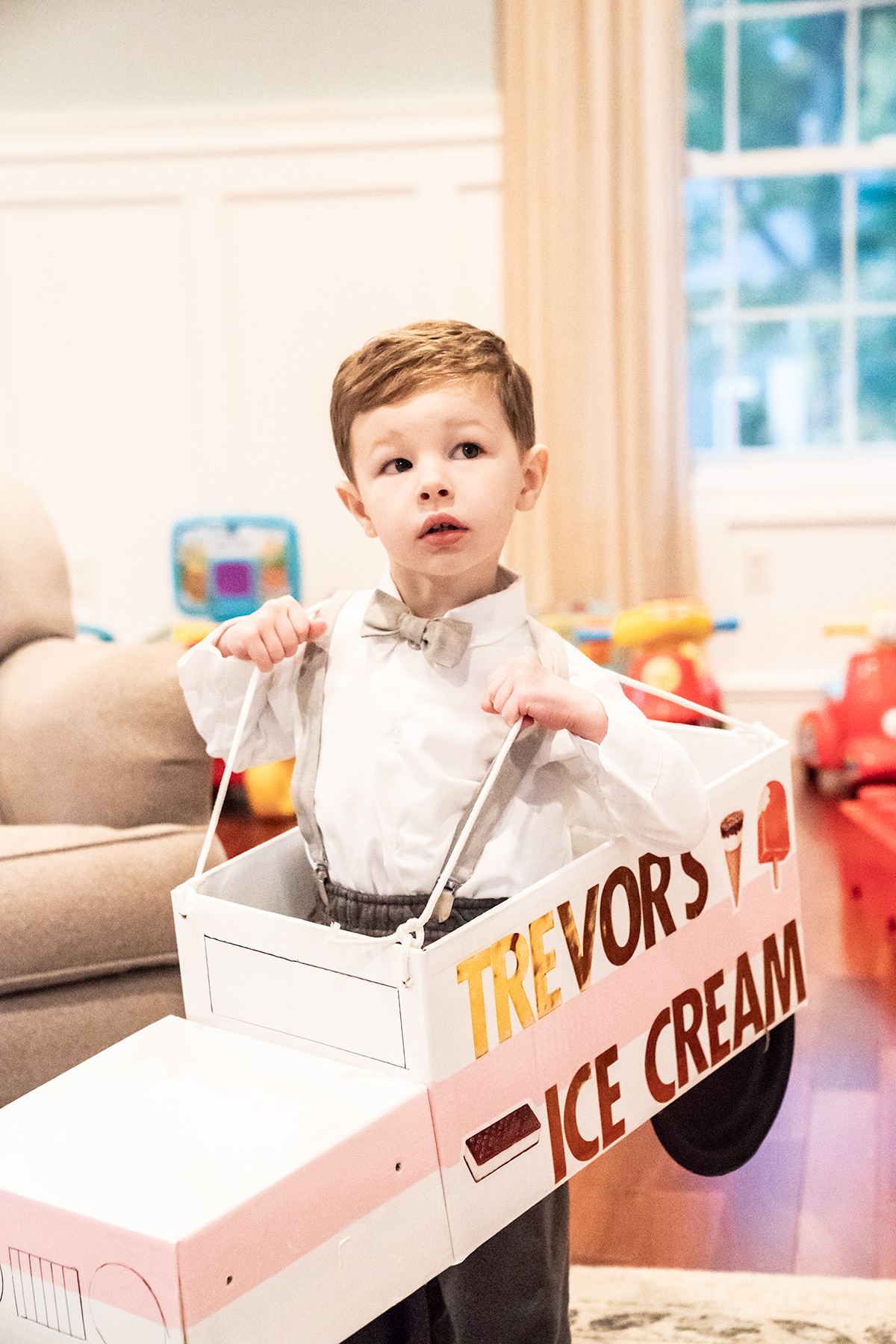 Last Halloween, we were hit with an awful storm. Our entire neighborhood lost power and Halloween was basically cancelled.

We spent the cold night huddled around candlelight in scarves and hats.

This Halloween, we had a party at our house, we did a little ‘trick or treating’ around the neighborhood, Tru had his first taste of chocolate candy, and we pulled off a successful ice cream truck costume (I call it a “success” because Trevor happily wore it). 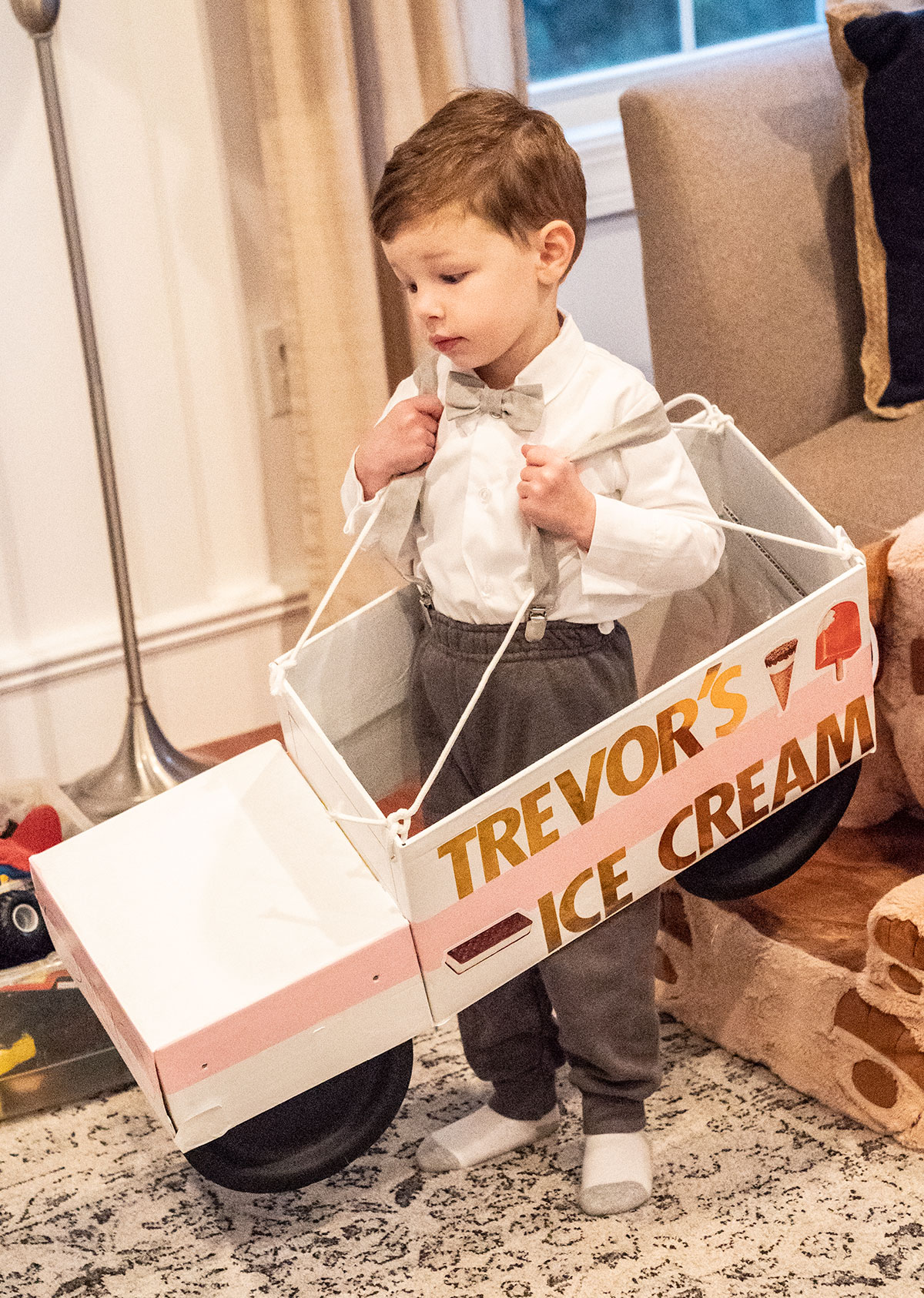 I thought this Halloween would be my final Halloween to pick out a costume for Tru.

I prefer Tru in cute animal costumes, but I figured he’d soon be old enough to want to decide for himself…

For his first Halloween, Trevor was the cutest little puppy. He was fascinated with dogs, especially Calvin, at the time.

For his second Halloween, Trevor was an adorable “Tiggy” when we went to Mickey’s Not-So-Scary Halloween Party at the Magic Kingdom…

… and he was also the cutest Ewok (a much warmer costume!) when we returned home to New England.

Unfortunately for me, Trevor – at the ripe old age of 2 1/2 – developed a mind of his own this year. He didn’t allow me any opportunity to even suggest a costume.

He knew exactly what he wanted to be for Halloween.

For the entire month leading up to Halloween, anytime anyone asked him what he was going to be for Halloween, Trevor would answer, “pink ice cream truck.”

Week after week, he had the same answer.

Every single time the subject of Halloween came up.

All he wanted was a pink ice cream truck.

Chris and I had no idea where he came up with the idea!

It was way too original for either of us to have thought up.

As Halloween approached, it became clear to Chris and I that we were going to need to take this pink ice cream truck idea and turn it into reality.

I researched videos on YouTube about how to build a truck costume out of some old diaper boxes.

And he glued the boxes and painted the whole thing to look just like a truck, including four paper plates as wheels.

Our plan was to reveal the ice cream truck on Halloween, when Tru woke up from his afternoon nap.

Right up until he started rolling around and singing in his crib, we were working hard on that costume.

I was still affixing the letters that read, “Trevor’s Ice Cream” when he woke up.

I was nervous about what he’d think for the big reveal.

He’d spent a month building up to this moment, and I didn’t know what the “pink ice cream truck” of his imagination looked like.

I also didn’t know if he understood the concept of a costume.

I was worried he was expecting a toy ice cream truck.

So I bought a plastic ice cream truck toy – I found one with some pink on it – just in case.

When it was finally time for the big reveal, he was happy!

There was a minor problem though: wearing an ice cream truck was a little complicated.

And he had to hold onto the rope over his shoulders to keep it from falling down.

He had a little trouble walking in it.

But he wore the costume proudly for at least an hour…

Trevor was interested in trick or treating at two houses before he’d had enough.

Trevor has a huge sweet tooth, so he was thrilled to receive a lollipop.

He also tried a mini chocolate KitKat bar, which he immediately thought was wonderful.

So then he had two more mini KitKats…

Then we went to the Haunted House that’s an annual event put on by one of our neighbors down the street.

The Haunted House was more spooky than we expected, and it was the first time I can remember Tru showing fear.

As we walked through a dark pathway filled with black streamers and eery music, Tru said, “I scared!”

I’d never heard him say that before.

He was also fearful of one of the characters at the Haunted House, a person dressed in a Mr. Peanut costume.

But it was a big, towering costume.

Mr. Peanut must have looked like a giant to 37-inch Tru.

And the costume had a spooky voice changer that gave Mr. Peanut a deep voice.

Ever since that Haunted House, Tru mentions Mr. Peanut once in a while.

It’s clear he’s afraid of Mr. Peanut and doesn’t want him to “be here” but, at the same time, he wants to be okay with Mr. Peanut.

If you’re wondering about this crazy character, here’s a photo of him from Trevor’s very first Halloween. I didn’t get a photo this year.

Even as a baby, Trevor doesn’t look thrilled to be in the presence of Mr. Peanut.

On the one hand, the whole thing is really funny and cute.

On the other, it makes me sad to watch fear enter his world and know there’s nothing I can do about it…

After the Haunted House at the neighbors, we had a little Halloween party at our house.

We had an Elmo and a dragon and a fireman and a mermaid (all age two) running around the house.

Plus one baby “Dalmatian puppy” who slept the party away in our little office with the door closed.

It was about as chaotic as it sounds.

This Halloween included a lot of “firsts”  for Trevor:

It was really special to experience it all, right beside him.