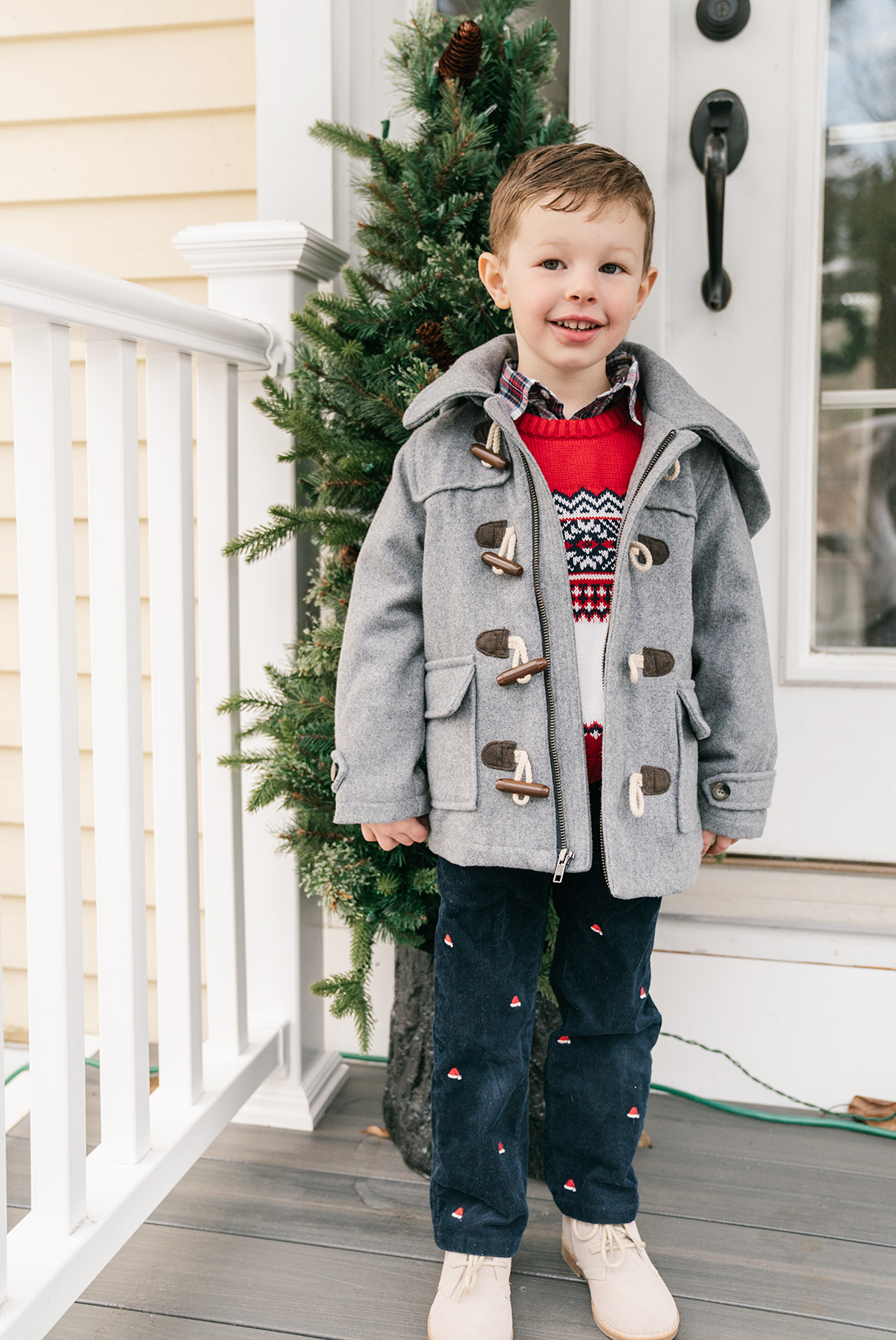 Well, I’ll say that Christmas 2019 was my absolute most fun Christmas with Trevor. I’ve often said that I love age three more than any other age so far, and that’s been true for the holiday season as well.

Tru loves to sing and dance these days. So that made the holiday season especially festive this year. He learned a lot of songs for the “Peace Gathering” holiday show at school. Nothing Christmas-specific, since the kids celebrate different holidays. But I loved watching him tilt his face toward the ceiling and belt out lines he remembered from his favorite songs:

Chris and I were wondering whether he’d sing in the school holiday show, by the way. We’d traveled to Disney World right before the show, so we were worried he wouldn’t know what to do. But he made his way confidently (maybe overconfidently!) right to the front and center of the stage (the kids were all just kind of in a big group). And he sang and did the hand motions for each song.

In the end, we had a light dusting of snow on the ground for Christmas and a clear day. So, if you ask Tru, it was a Slightly White/Mostly Blue Christmas.

Trevor randomly began talking about a strange character called ‘Wacko Toupee’ about a month ago. At first Chris and I were completely confused. We’d never heard the name anywhere. Chris even Googled it to see if we’d missed something from a YouTube video Trevor might have seen. We couldn’t find anything on Wacko Toupee. The name appears to be a Trevor original. Anyway, he kept bringing up Wacko Toupee and telling us the things he’d done. One time it was, “Wacko Toupee has the same birthday as me, but he’s a billion and twelve!” Another time it was, “Wacko Toupee jumped up so high both his ears fell off! But he put them back on.” Another time it was, “Wacko Toupee lives so far away, you’d have to ride a plane to see him. He lives all the way in Texas.” One time, and this one completely cracked up Chris and I because – where in the world does he come up with this stuff???  – but it was, “Wacko Toupee has a butt that’s bigger than the sky! His butt is bigger than love! His butt is so big, it’s bigger than Texas!” Trevor will forget everything that happened yesterday, but he’s been fixated on this Wacko Toupee character for well over a month now. We’ll see how the saga plays out in the New Year… (On Christmas night, while I was tucking Tru into bed, he informed me, “Wacko Toupee’s birthday is on Christmas Day!”)

I cooked a Christmas Eve breakfast-for-dinner again this year. I kept the menu similar to last year, except that I swapped out the frittata for avocado toast. I’m just not a huge fan of frittata. The avocado toast was amazing though. I’m planning to make it again next week. I think I’ll probably post the recipe sometime in the New Year. The 2019 menu included:

True to form, Trevor whined about having to sit down at the table to eat. And he insisted on eating only a cinnamon bun (Chris and I insisted he also taste a couple strawberries and some hash browns!) So that was as typical a dinner as we’ve ever lived through with Tru. I’m curious to know if there’ll ever be a Christmas Eve in our future where Tru is excited to sit down and enjoy an actual meal. Trevor eating (and liking!) something I cooked: that would be a true Christmas miracle!

Afterward, we cuddled on the couch, turned off the lights – except for all of the twinkling Christmas lights – and watched The Polar Express movie. Tru watched for about 30 minutes or so before getting bored, but it’s amazing how closely he pays attention now. He watched intently, asking a hundred questions along the way.

Counting Down to Christmas

We got a really nice wooden advent calendar last year in Stowe, so I put a little chocolate or tiny toy in the calendar each day. That was Trevor’s first question when he’d hop into bed with me each morning, promptly at 7am: “Is today number ten? Did you put something in ten yet?” One day he received a tiny little Santa eraser. I thought it was cute. (Also, it’s challenging finding toys under two inches tall.) He didn’t understand what the eraser was, so I demonstrated how it worked with pencil and paper. His response: “I don’t want an eraser. I don’t like it.” But then he started playing with the Santa and within a few days he was saying, “I hope I get another eraser today!”

All He Wants for Christmas Is … A Lemon

Last year, Trevor knew what he wanted for Christmas and he stuck with it. This year, he just didn’t seem to want anything in particular.

We went to a local garden Christmas light show where Trevor met Santa, and he asked for a yellow tractor. But then he forgot all about that. Another time he said he wanted “a train as big as the Polar Express.” When we sat down together to write a letter to Santa, he said he wanted … a lemon! How he came up with that, I’ll never know. He refuses to eat fruits and vegetables, so it’s not as though a lemon is something he eats every day (or eats ever!)

In the end, Chris and I got him a Strider balance bike. It’s supposed to make learning to ride a bike easier because the seat is low to the ground, so kids can push themselves with their feet first (and then add pedals after they master balance). We picked a bright yellow colored bike, and we placed a lemon on the seat, then set it out next to his Christmas stocking. He had a big grin when he saw the lemon too. He held it up to show me and said, “a lemon to cook dinner!”

It’s such a contrast to my personality. I’m a bookworm who’d prefer curling up on the couch with a hot cup of tea.

He loves running races around the house. We’ll just do loops from the kitchen to the dining room down the hall, to the living room … around and around. I tell myself that this is good exercise that I could really use. He loves going outside, no matter how cold or snowy, to run around and munch on snow. He loves eating snow as much as he loves eating sand! I get myself all bundled up and tell myself it’s so good for him to breathe fresh air and be in nature … and that it’s good for me too.

Trevor continues to love music too. One activity that will keep him occupied for longer car rides: scrolling through iTunes on my phone, selecting songs to play, and singing along with his favorites. Oh, and he’s started indoor soccer for the winter. He’s fast on his feet and athletic, so I think he’ll love it.

The Holiday Season That Trevor Was Three

Here are the greatest challenges we’re facing these days:

Trevor wants to be the center of attention at all times. I don’t know if this is the result of being the only child and only grandchild in the family. Or if this is typical preschooler behavior. But when Chris and I become engrossed in conversation, Trevor will suddenly just randomly shout and yell to bring the focus back to him. I’ve taught him to say, “Mama, excuse me” when I’m talking. So sometimes he’ll just yell, “Mama, mama, mama! Excuuuse me!”

Tru seems very extroverted. He likes interacting with other people at all times. He’ll play quietly on his own, but not frequently and not for long. It’s always, “Mama play cars with me! Mama let’s go outside! Mama I neeeeed you now!” Just as when he was a baby, it’s still very hard for me to check email or eat breakfast in peace. Trevor will say, “don’t eat! Let’s play!” Or, “why can’t I use your computer?” His two favorite shows these days (that are the only thing that buy me some peace): Mickey Mouse Clubhouse and Daniel Tiger.

Three is an amazing age because, as independent as Trevor is growing, he still needs my assistance for nearly everything. For example, he’s mastered blowing his nose! But he’d never just walk over to the tissue box and blow his nose. I have to grab a tissue, hold it up to his face, and say, “time to blow that nose.” He’s working on dressing himself. But he couldn’t care less about clothes. So he always asks, “which way is front and which way is back?” When he’s hungry, he loves “helping” to make the popcorn. But he can’t reach the microwave. He can get his own water from the water dispenser in the fridge and he can drink from a cup. But he needs help reaching the mik and orange juice. He can play quietly with his toys, but normally gets frustrated quickly: “Heeeeelp! The wheel fell off my car!”

Some of the best stuff with this age:

I’ve mentioned how Tru loves to sing and dance, which is so much fun for me. Two recent favorites are “Hello Goodbye” by the Beatles and the new version of “Higher Love,” which we both love to sing to. He also invents pretty elaborate stories that are funny and entertaining. And he loves to cuddle. In the morning when he wakes up, he always crawls into bed with Chris and I. And when I need a break and turn on Daniel Tiger, he’ll curl up on the couch with me. He loves to just run and explore outside. And to run inside. And those are some special moments, when we’re just running completely free and laughing together.

I also love to see how Tru just lights up the faces of the strangers he meets. He’s very friendly and he’s always ready with a list of questions for everyone. I kind of know how nice it is to have strangers smile and wave at you wherever you go … because I’m always standing next to Tru!

The Christmas Activities We Enjoyed

Tru and I built a simple gingerbread train with one of the pre-made kits they sell in grocery stores. That was actually really fun. We also loved visiting a local garden Christmas light show (probably because the crowds happened to be light that night and the weather happened to be warm!) And we did the Polar Express train ride in Portland, Maine.

Tru and I also had our very first attempt at homemade gingerbread cookies. That activity was at once hilarious and joyful and also aggravating beyond belief. If you’re wondering about the aggravating part: picture flour-covered counters and rolling pins, sticky dough, and a high-energy, sugar-loving preschooler.  Tru wouldn’t stop snacking on the flour I had spread across the counter. He was covered in flour (luckily, I knew to remove all of his clothing before he began baking). At one point, he stood up and walked across the counter, covering the soles of his feet in flour too. I’m pretty sure that all he ate that afternoon was flour, cookies, and frosting. It was memorable though. And the cookies actually turned out really tasty. I guess it’s a good metaphor for parenthood: it’s all an overwhelming, aggravating tornado of a mess. But so sweet. So sweet and so worthwhile.