Trevor was four this holiday season, and four has been my favorite age so far. Trevor is still so innocent and fun-loving at this age. But now he’s old enough to participate in and understand a wide variety of Christmas activities.

In Tru’s eyes, every Christmas activity was brand new, so exciting, and joyful.

We got one big snow storm before Christmas. Unfortunately, it all melted before the big day. But Tru was thrilled while it lasted.

As I’ve mentioned a lot now, he won’t eat anything I cook. But he will eat snow. All the snow.

When we take Calvin for walks and there’s snow on the ground, Chris and I can’t hope to get more than a quarter of a mile in an hour. Tru stops at every snowdrift along the way, munching on snow. The basic task of walking the dog feels impossible! But Trevor has no destination in mind, no goals for walks, no time limits. Wandering off into a snowbank is just the fun and interesting choice for him. 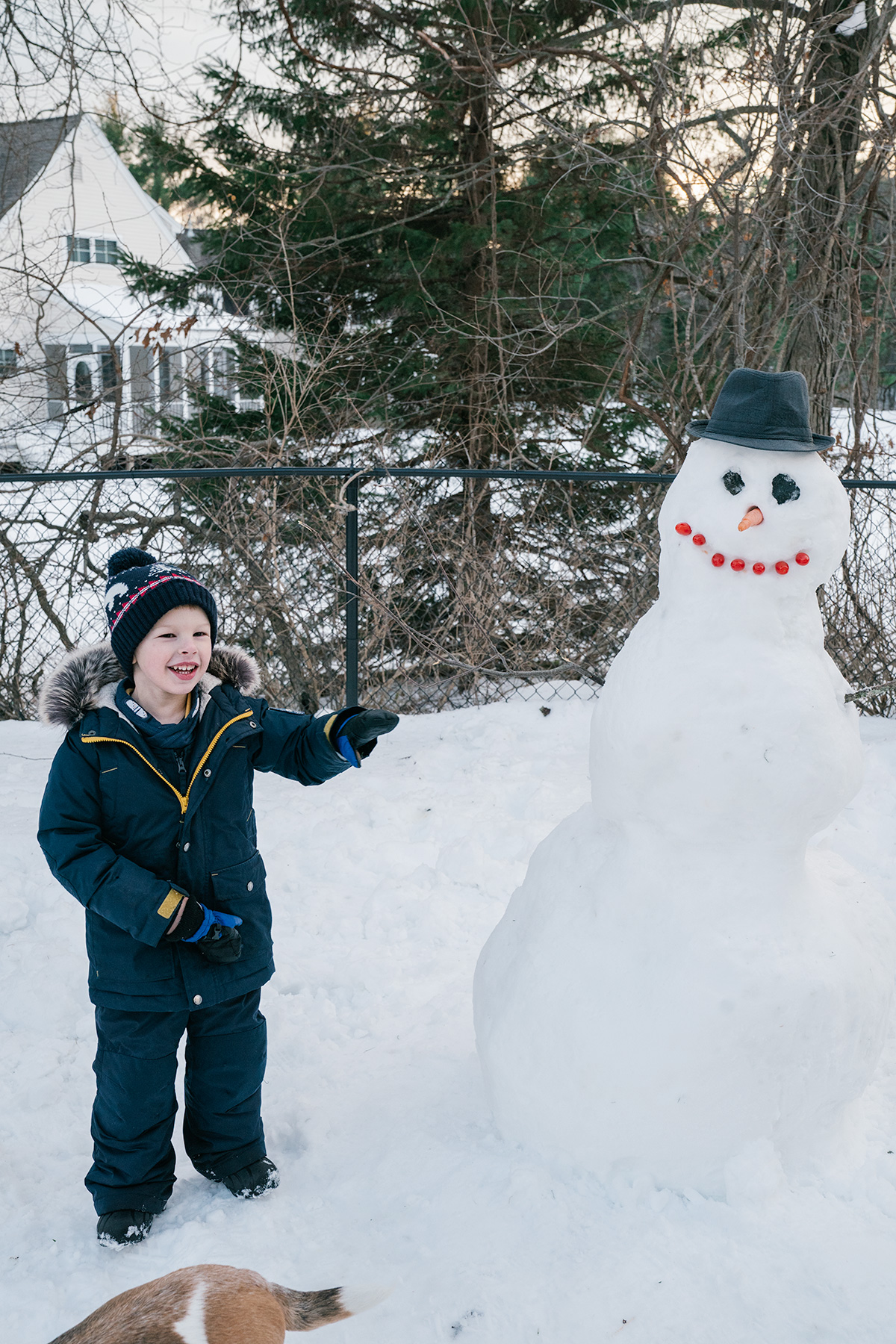 For the holiday season, Tru was pretty obsessed with the movie Frozen II on Disney+. He loved the character Kristoff and the “Lost in the Woods” song especially. So when the snow arrived, we got to build our own Olaf!

Spookley and the Christmas Kittens is another movie Tru was obsessed with this holiday season. He watched it over and over and over and over… He learned all the songs and would sometimes just randomly belt them out. On car rides when Tru was getting antsy, I’d pull up the Spookley songs on YouTube to keep him entertained.

And then one day, he dropped it. He had no interest. He forgot all about Spookley. In the same way he dropped his Hot Wheels toys and all his other toy cars and the movie Cars. He just didn’t care anymore and moved on to something new.

There are a thousand fun things about age four, but here’s one: Tru was happy to wear PJ’s that matched Mama’s! 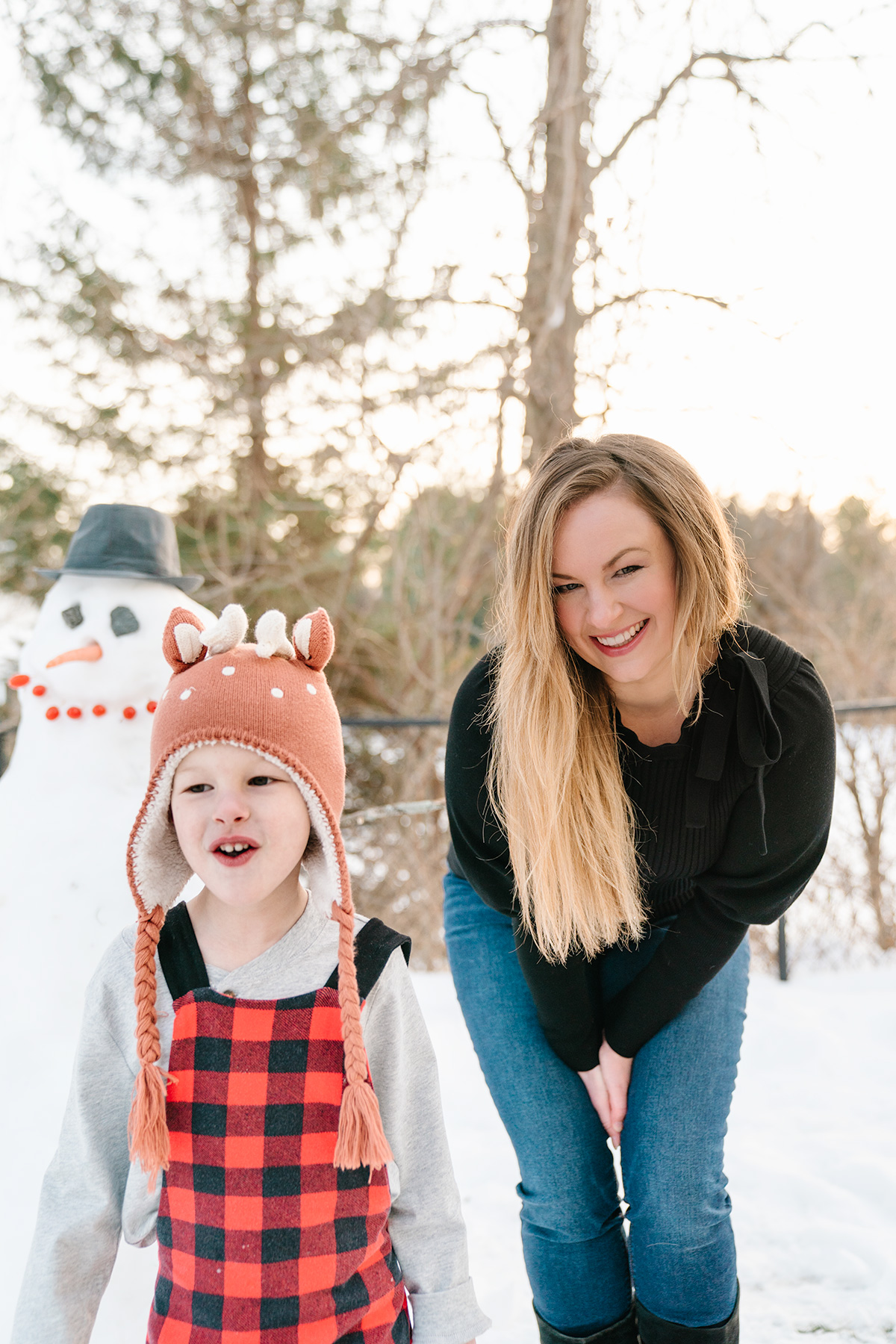 I also got him the cutest reindeer hat and he loved it. Will this be the last Christmas Tru wears an adorable reindeer hat? How much longer will he like matching PJ’s? Those thoughts go through my mind. Here’s another one: “is this one of my last times picking up Tru?” (Trevor is getting so heavy and tall these days, I barely pick him up at all anymore.)

It’s one of the tougher experiences I face as a parent: the fleeting nature of childhood. I can’t grasp anything. At all. The moments feel very precious and I feel desperate to hang on, and yet they just slip through my fingers… 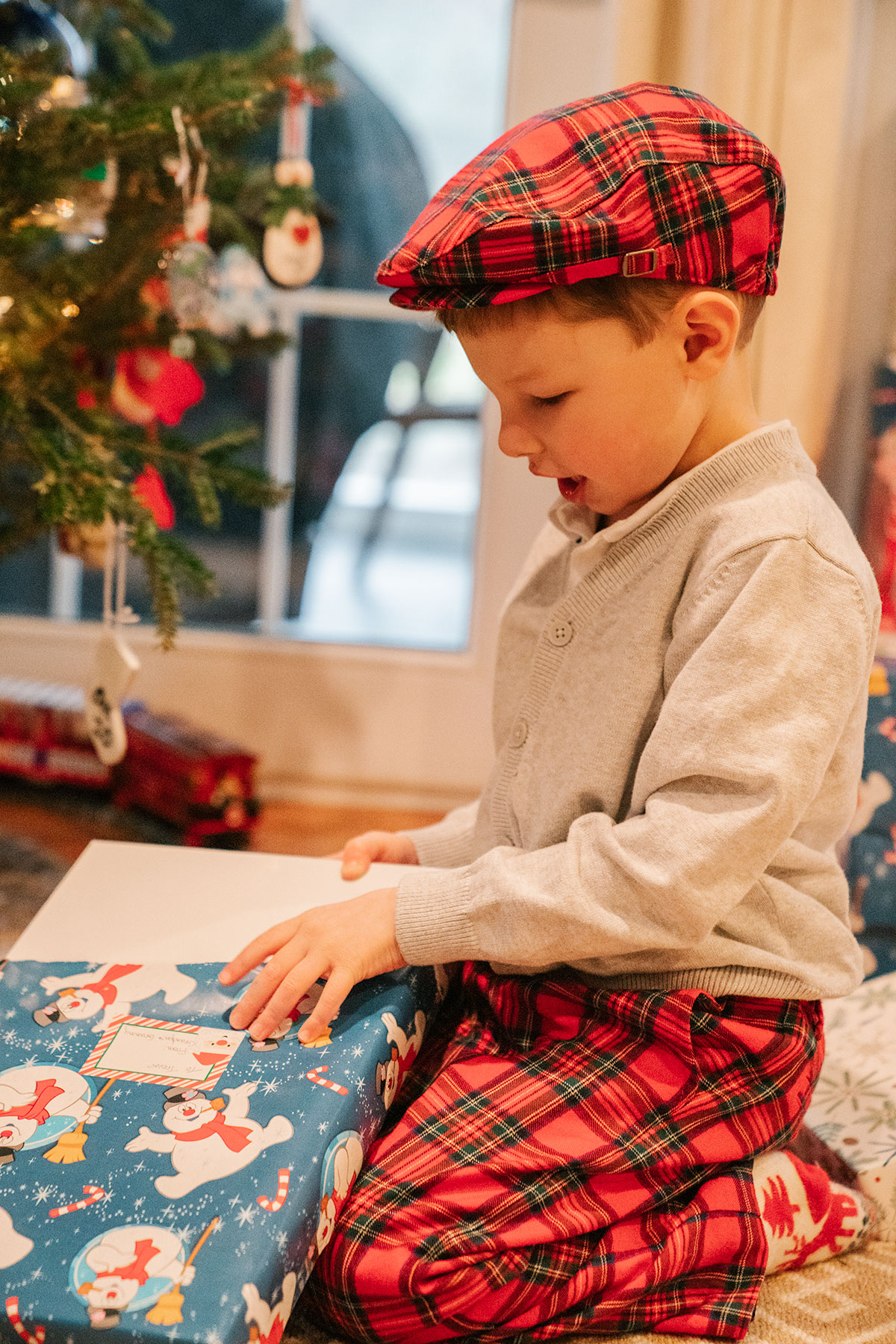 Tru pretty much puts up with my dressing him in the outfits I put together for him (as long as it’s just once in a while). He doesn’t care about clothes. It’s fun for me, but I don’t know how much longer until he puts his foot down and start deciding on outfits for himself. Considering how much he doesn’t care, maybe it will be years. But also considering how opinionated he is on so many things, maybe it will just be a few more months.

Anyway, he agreed to wear a few adorable Christmas outfits this season so I could take pictures. Trevor doesn’t like to smile for photos. He either a.) does a fake smile or b.) complains or c.) does a funny face. So I have to ask Chris to stand behind me and say or do something ridiculous to try to get him to laugh. That’s my best shot at a genuine smile.

One thing he did recently put his foot down about: jeans. He says the buttons are uncomfortable. He also said “no” to overalls because the straps have accidentally fallen into the toilet at school. If he choose his own clothes he always chooses “comfy clothes,” which means sweatpants and long-sleeved T-shirts (preferably outer space-themed). That’s his wardrobe of choice, always.

Some of the special things we did to celebrate the holidays: 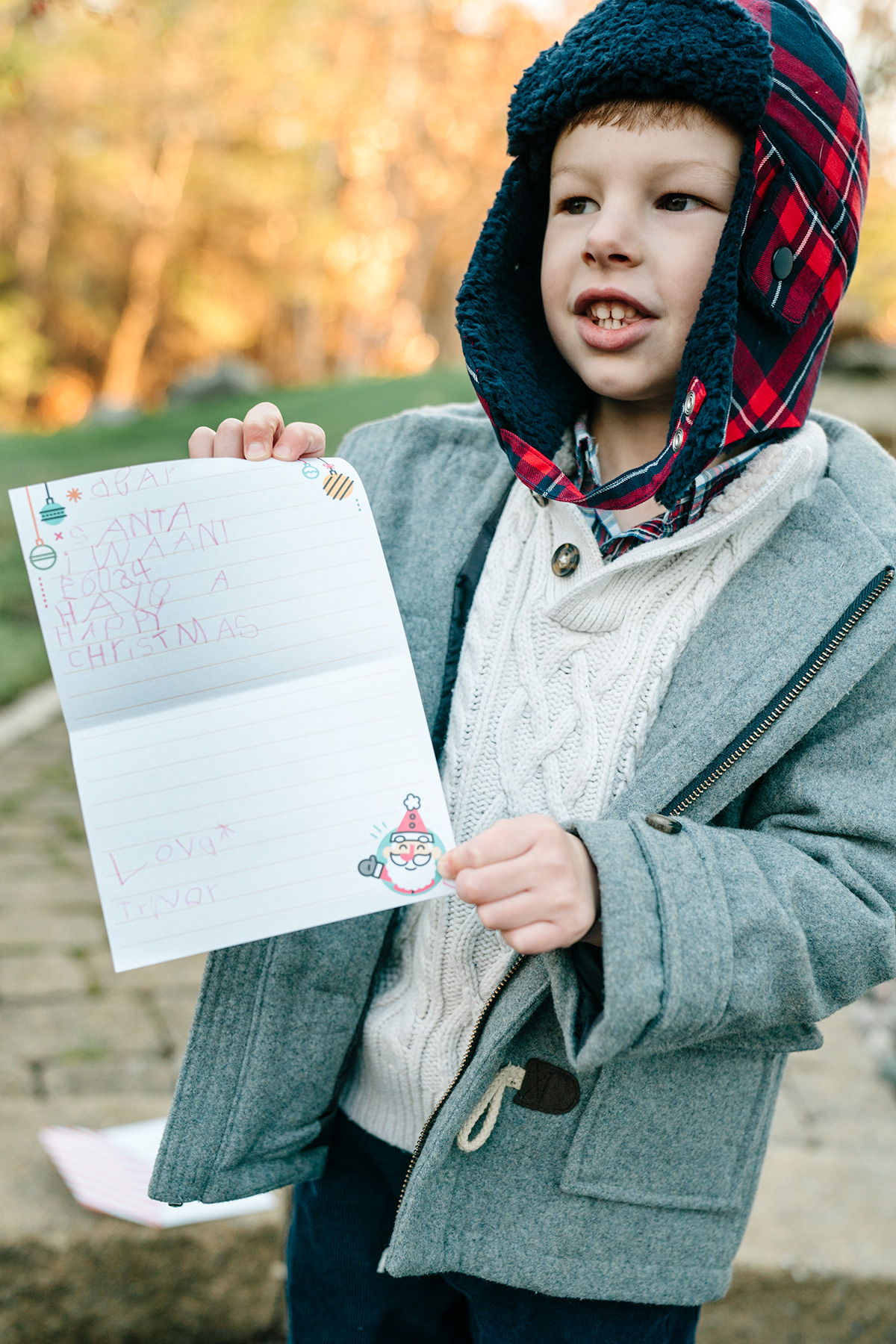 1.) Tru wrote his very first letter to Santa. He knows how to write all of his alphabet letters now and so, with the help of Chris and I, Tru was able to spell all of the words he wanted to write and put his letter into the mailbox. He even received a reply from Santa – both a letter and a video!

2.) There was an outdoor Christmas lights display at a local historic garden. So we got bundled one night after dark and walked around to check out the colorful lights. There was a stand selling cupcakes and hot chocolate along the way. Naturally, Tru had to have a cupcake and that was his favorite part of the night.

3.) New Hampshire Motor Speedway did a special Christmas lights event this year that seemed really popular. Visitors could drive around the track to check out a variety of Christmas display lights, all while the local radio station played holiday music.

4.) Before lights out, Tru loved curling up each night in his bed to read Christmas stories with Chris and I. One favorite was an edition of The Grinch Who Stole Christmas that included several flaps on each page. Tru would hand this book to me and say, “I’m going to flip all da fwaps.”

5.) Trevor loved his advent calendar. At first he was calling it his “advertise calendar,” which really cracked me up! Tru would come bounding into my bed at 6am each morning asking, “can I check my advertise calendar? Did you remember to put something in da-er [there]?” This year, Chris also got Tru a Lego advent calendar that has a tiny Lego toy to build each morning. 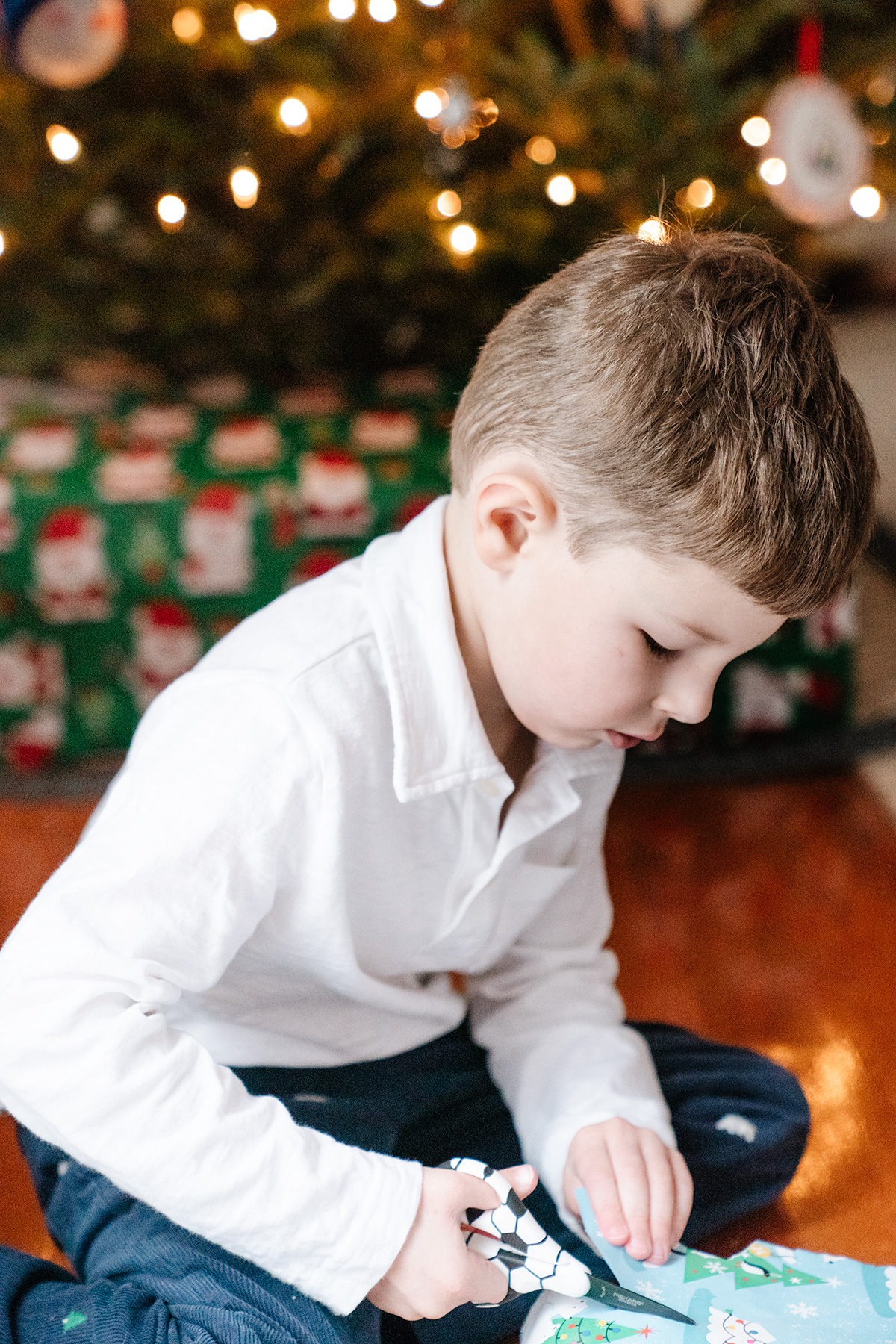 6.) Tru loves arts and crafts of all kinds. So he had so much fun learning how to wrap gifts this season! He’s becoming very skilled at using both scissors and tape. He also loved painting ornaments for the tree and vases to give as Christmas gifts. He also painted a whole outer-space-themed canvas for Chris’s office. And – of course – he loved making gingerbread cookies and eating plenty of frosting along the way!

For several months, Tru has loved collecting marbles. He also loves building tracks for the marbles, and his tracks have become more and more elaborate over time. So that was his one request for Santa this year: a big marble track. And Santa delivered! When Tru came down the stairs (he was up at 6am on Christmas morning, his usual wakeup time), the marble run was waiting for him in front of the fireplace, already assembled.

Another special gift: a mini telescope from Grammy and Grandpa! Tru’s love of outer space is as strong as ever. So he got a beginner telescope to check out the stars at night.

Tru also got a Playmobil hockey rink from Mimi and Grampy. This was special because Trevor started playing hockey for the first time this winter. It’s hard for me to watch the games because the kids are very unsteady on their skates and they’re constantly accidentally crashing into each other, big hockey sticks and sharp blades flying in every direction. But Tru loves it. He bounds out of bed early on weekend mornings, so excited to get on the ice.

Parents will completely exhaust themselves trying to create Christmas magic. Decorating inside. Decorating outside. Getting a tree and putting it up and decorating it. Making cookies and gingerbread houses. Writing letters to Santa and Christmas cards. Buying carloads of gifts. Wrapping all those gifts. Cooking festive meals. Magic doesn’t come for free in this world, right?

And then I look at Trevor. With all of the holiday festivities this month, he was full of happiness and laughter. And yet I know that without all of the festivities, Trevor would have been full of happiness and laughter. He enjoyed all of it, but he didn’t need any of it. This preschooler shows me that he can find magic anywhere, anytime, anyplace. As I’ve said before and will say again, I have so much to learn from him!