I guess I had some crazy idea in my head that, after nearly a year of family adventures, we were old pros at travel.

Maybe, in some buried and unspoken part of my brain, I wanted to wrap up our year of family travel with the old “and then they lived happily ever after…” conclusion.

But what I’m realizing, as I look back over our time in Vermont: you never reach a “finish line,” where travel just automatically runs smoothly.

Maybe it was a lesson I needed to learn about life in general, and family travel was the thing to teach me.

We think “once I lose the weight,” “once I pay off the debt,” “once I get the dream job,” then finally, finally life will be easy and smooth.

You don’t ever “arrive.”

This is one of life’s few guarantees.

Another guarantee, though, is that the fun and laughter can always outweigh the tough stuff, if you let it.

This was true in Vermont, and it’s been true on all of our family travels.

Here’s everything that happened on our wintertime trip to Vermont:

One of the things I’ve learned over the past year: when you’re traveling with a little one, sleeping situations can be tough.

It was 8:45 pm on our first night in Vermont, and Chris and I were in the hotel bed.

Chris turned to me, “guess I’ll turn the light out.”

The hotel was small, Trevor’s crib was right next to our bed, and he needed to get some sleep.

But as long as we had lights on, or screens lit up, or chit-chat going on, Trevor remained alert and interested in whatever was going on.

No way he was going to sleep with Chris and I still up and doing things.

Oh, and that early bedtime? It turned out to be very useful for Chris and I.

Because Trevor barely slept for the entire trip!

I think he just had trouble adjusting to a different crib and new surroundings.

Trevor woke up nearly once every hour of the night (yes, at least eight times per night!), yelling out or crying…

Despite the tough nights, our days were lively and busy.

The Green Mountains region is overflowing with winter activities and family friendly destinations.

Woodstock, where we stayed, was the most picturesque and charming New England town.

Many of the buildings in Woodstock have fascinating, historic roots.

The hotel where we stayed, The Woodstock Inn & Resort, has a history that dates back to the 1800’s.

It was beautifully decorated inside, so I had some fun just strolling around, snapping photos:

We got a snow storm one morning but, lucky for us, it wasn’t heavy enough to keep us captive in our hotel room.

(I don’t know what we would’ve done in that case. Trevor gets antsy after about an hour or so in a small hotel room.)

But we had lots of fun in the snow, catching snowflakes on our tongues.

Trevor didn’t hesitate to dive head-first into the snow.

He loves to eat snow.

He looks for “new snow” (fresh-fallen and without dirt or grass) and gobbles it up like it’s candy.

Speaking of winter fun, we’d planned this trip to Woodstock mostly to take Trevor to a nearby ski resort called Killington.

Killington has a mountain coaster that runs straight through the winter ski season and, since Tru loves roller coasters, I thought he’d be a big fan.

And he did love it!

Both Chris and I took a ride on the mountain coaster, with Tru buckled into the seat in front of us.

We were both surprised how fast it flies down the mountain.

We also did snow tubing.

Tru got his own tube and rode down all by himself, for the first time.

There was something he loved even more…

Before visiting Killington, we’d gone to the Vermont Institute of Natural Science (VINS).

VINS is a sanctuary for animals, mostly birds, who’ve been injured or kept as pets and then abandoned.

Chris and I loved seeing the animals – like owls, falcons, turtles, even eagles – up close.

There was a green spiral slide that he rode at least twenty times.

That spiral slide was one of Trevor’s favorite things about Vermont. 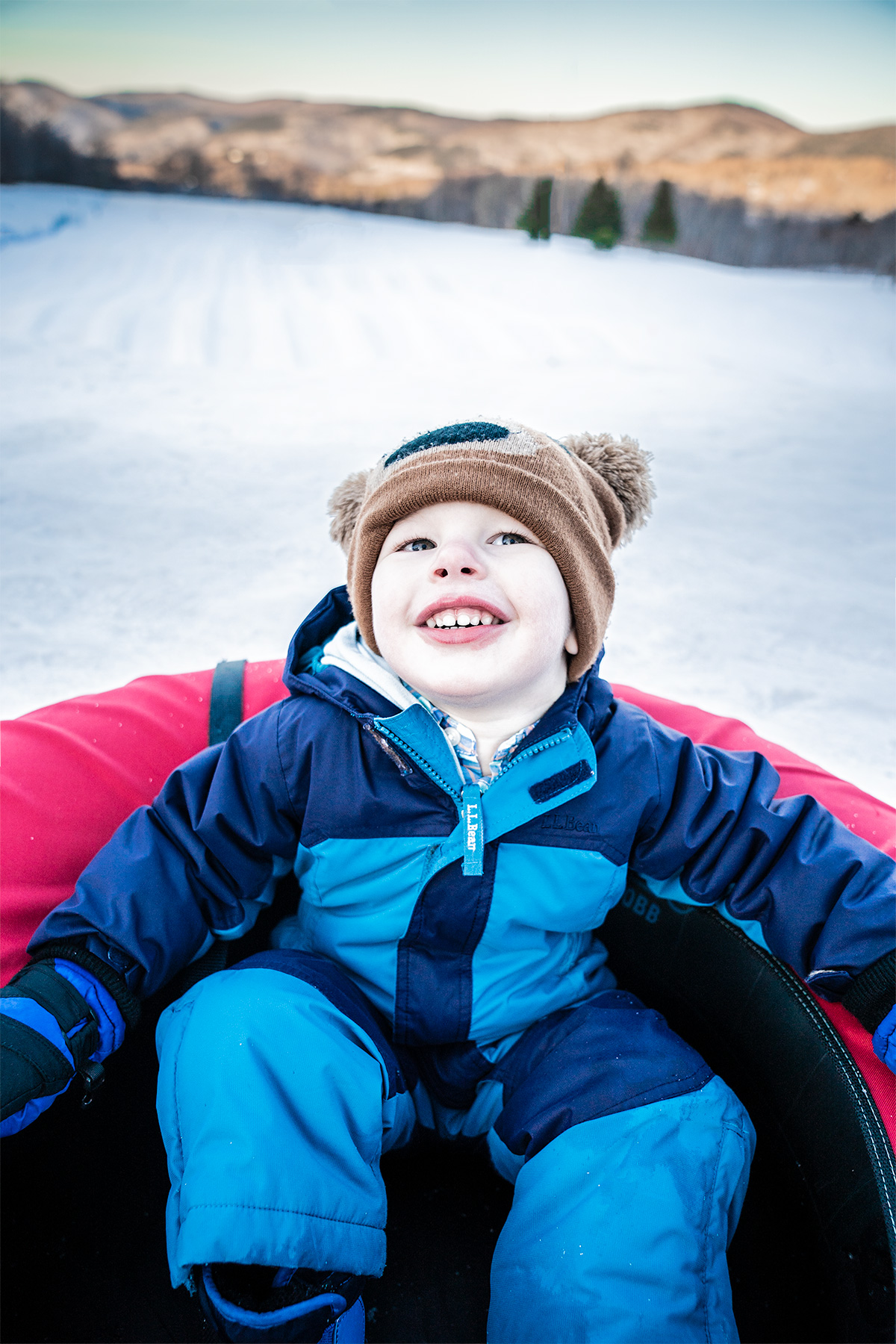 A few times while he was riding down the hill in a snow tube at Killington he’d ask, “go on green slide? Trevor go back to green slide?”

So we returned to VINS on the second day of our trip, and Trevor enjoyed the green spiral slide for a second time.

Really, we could have skipped the 40-minute drive to Killington (and the not-cheap lift tickets for snow tubing!) and Trevor would have been just as happy…

Another thing Trevor absolutely loved was the Montshire Museum of Science.

The Montshire was basically a dream destination for little kids.

There were climbing structures and lots of interactive games and puzzles.

(Plus, a very popular bubble exhibit!)

There were also several exhibits where kids could run balls along tracks and through tubes (a hands-down favorite of Tru’s).

We spent a full afternoon at this museum and, still, Trevor refused to leave.

One of my favorite memories, though, was eating brunch at The Mill at Simon Pearce.

I loved browsing here and getting lots of design inspiration for our own home, which I’ve yet to decorate (even though we moved in when I was pregnant with Tru)!

The Simon Pearce restaurant was beautiful.

And the food was incredible.

There was broccoli cheddar soup on the menu, which Chris ordered for himself.

But Trevor ate most of it.

This sounds like such a silly, little thing, but it was a big win for us.

Trevor is typically so picky in restaurants, he’ll rarely eat more than a bite or two of a basic grilled cheese sandwich.

So Chris and I were practically cheering over the way he gobbled up this soup.

Chris and I felt lucky to find such a beautiful restaurant – with such elegant, incredible food – that was also welcoming to children.

Over and over again as I look back on our travels, it’s often the littlest things that stand out in my mind as my favorite memories.

We didn’t leave Vermont without one last challenge: by the time we were packing up our things to head home, we were all sniffling and sneezing and coming down with colds.

Trevor was quickly developing a cough that sounded pretty bad.

As we strapped Tru into his car seat and started the long drive home, Chris said, “we should really come back to Woodstock this fall.”

I didn’t know how to respond.

After snow storms, and picky eating struggles, and no sleep, and major meltdowns, and sickness, Chris still wanted to continue traveling…

After a long pause, I finally sighed, “you’re right. Woodstock would be really beautiful with the fall colors.”

We’re going to continue traveling in 2019.

But I’m setting only one travel goal for this year:

Expect some chaos. And then learn to find the joy, despite it!

Travel Confessions: A Return to Québec City at Christmas