Here are the things I love about this dish:

Okay, so maybe this hearty and rustic dish is the opposite of a romantic Valentine’s dish.

I felt like I had to say something about the impending holiday.  Please note the roses and wine in my photo above in place of the romantic recipe.

So here are the major players this week ( ground beef not pictured since there really wasn’t room left on the cutting board).

Begin by starting on the potato crust.  Boil a large stock pot of water.  While that’s heating up, chop up the potatoes.  Cut each potato in half and cut each half into four about equally-sized pieces.  I peeled the potatoes because I was thinking about how the final photos would look, but you can skip this step and leave the skins on if you’d like.

Here’s the sly, stealthy part.  We’re going to add a lot of cauliflower to the dish, but in this particular recipe, you can’t actually tell.  When the crust is completed, it tastes just like delicious, flavorful mashed potatoes.

So, here’s the easiest way to cut cauliflower that I’ve found:  Hold the cauliflower on its side and cut down toward the cutting board, removing as much of the outer leaves as you can. 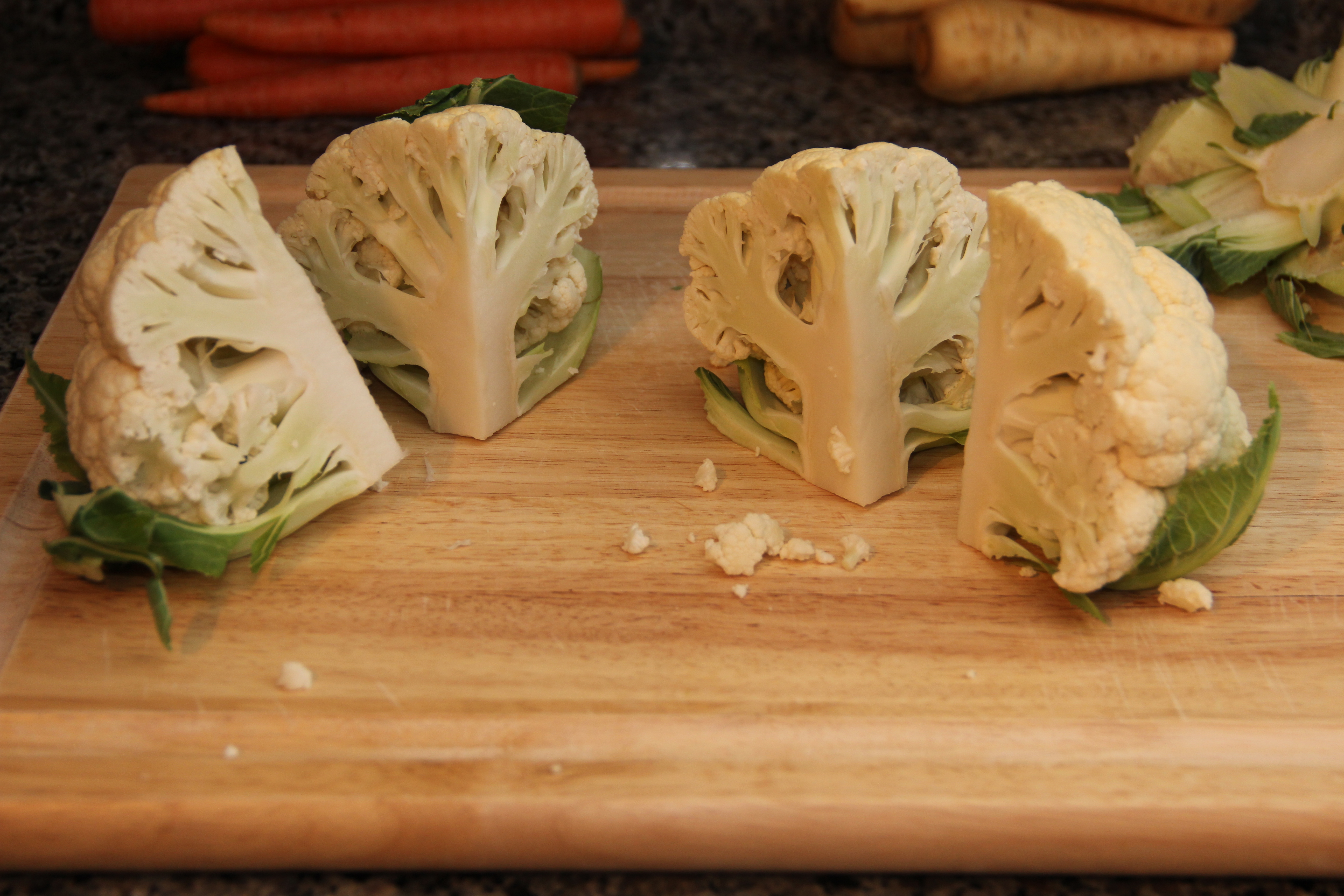 Next, place the cauliflower right-side up and cut it in half and then into fourths.

Now you can easily cut off the rest of the thick inner stalk, slicing diagonally into each quarter as shown above.

After you’ve chopped off all of the leaves and inner stalk, just cut any large pieces so they’re about equally-sized.

Place the potatoes and cauliflower into a steamer basket over the boiling pot of water you started.  Allow everything to cook until the vegetables are fork tender.

While the vegetables are steaming away, shred some sharp cheddar.

Why sharp cheddar? Using a cheese with a strong flavor such as sharp or extra sharp cheddar means you can use less and still get a ton of cheesy flavor in every bite.  More flavor for less fat and calories, in other words.

Next, chop up some chives.  I love chives – they’ve got healthy nutrients like vitamins A and C, they have no fat and calories, and they add such a delicious layer of flavor to the potatoes.

The easiest way to prepare them is to cut quarter-inch pieces using kitchen shears.  If you don’t have shears, your knife will also work.

When your vegetables are fork-tender, put them into a large mixing bowl and add  about 3/4 of the grated cheddar and 3/4 of the chopped chives.  Be sure to season well with salt and pepper.

Use a potato masher to mash everything up and then just stir to make sure everything is well combined.

Now the tough part:  cover with aluminum foil and set aside.  These potatoes look, smell and taste fantastic, so the ‘setting aside’ without trying 3, then 5, then 8 ‘taste tests’ is very difficult.  Just leave some for the shepherd’s pie, okay?

Now on to the meat mixture.  Begin by browning a pound of 95 percent lean ground beef in a large saute pan.

There are a couple of substitutions that will work equally well here:

While the meat is browning, mince up some garlic and dice one onion.

And add them to the saute pan to allow them to cook and soften.  Season with salt and pepper.

Next chop up some carrots and parsnips.  I suggest using three of each in the complete recipe (below), but feel free to use more (as I did) if you’d like.  The more you use, the more healthy fiber and vitamins you get in each serving.

Have you tried cooking with parsnips this winter?  They look like white carrots and they have a distinct sweet flavor.  In terms of nutrition, they’re low-calorie with lots of nutrients including vitamin C, folate, potassium, as well as fiber.

They’re delicious in this recipe.

Prepare them just as you would carrots by peeling them, cutting off both ends, and dicing them.
One note:  if you happen to buy especially large parsnips, you may want to remove the core because it can be a bit tough and chewy.
My parsnips were medium-sized so they didn’t need the core removed, but here’s how just to demonstrate:

Cut them in half lengthwise.  Place one half, flat-side-down on the cutting board for stability and quarter it.  You’ll be able to see the darker color of the core – holding each quarter, flat-side down on the cutting board for stability, cut out the core.
Again, you only need to do this if the parsnips you bought are especially large.  Otherwise, skip this step and just chop them up as you would the carrots. 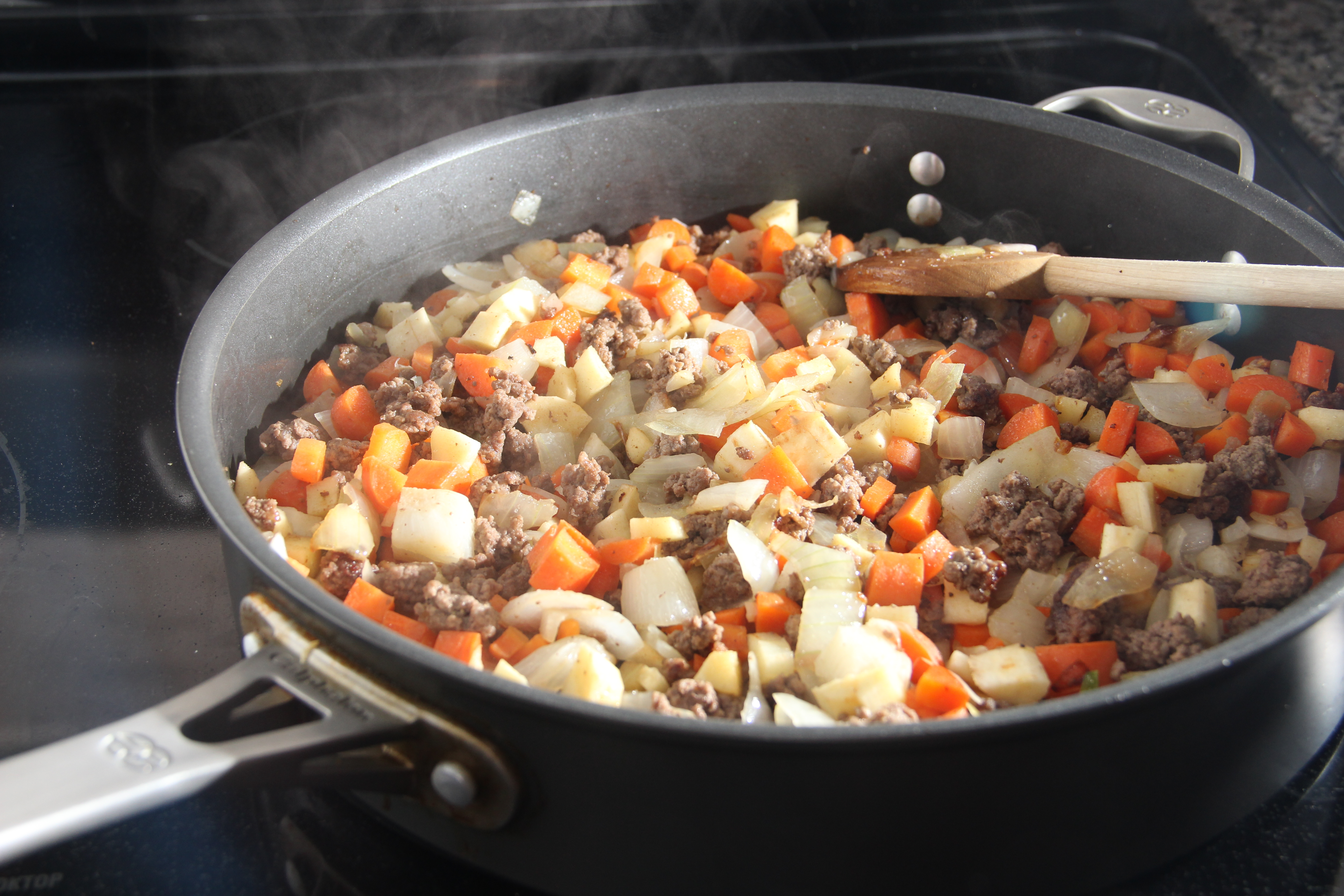 Add the diced carrots and parsnips to the saute pan and cook for about 5 minutes, allowing them to soften.

Next add the dried oregano, cinnamon, tomato paste, and thyme to the pan.
For the thyme, pulling individual leaves off the stems takes way too much, well, time.  So I just toss a few whole sprigs of thyme into the pan.
Just remember to remove them at the end, before everything gets placed into a casserole dish.
I lack the virtue of patience in the kitchen, so this method works well for me.  Tons of wonderful thyme flavor, zero work required.
Substitution:  you could also use a tablespoon or so of dried thyme if you don’t have any fresh thyme.

I love tomato paste in a tube, by the way.  Use what you need and then just put the cap back on and store in the fridge.  So much more convenient and less wasteful than the canned kind!

Now add the red wine and allow that to simmer and reduce down until you’re left with a thickened sauce.  Season with salt and pepper to taste.

Next, remove the thyme sprigs and spoon the meat mixture into a large casserole dish.  Add some frozen corn and stir to combine.

Top with the potato-cauliflower mash, spreading it all across the top of the dish.
Sprinkle the remaining cheddar you set aside earlier across the top.  This will help the crust brown nicely on top.
Now place the casserole dish under the broiler for about 5 minutes.  You’ll know it’s ready when the crust begins to turn a light golden brown.

Serve yourself a nice, heaping plate.  Top with some of the remaining chives you set aside earlier. Dig in!

How can this satisfying, hearty dish be healthy?
The sweetness of the carrots and parsnips, combined with the flavorful meat, combined with the cheesy potato mash, combined with the delicate hint of onion flavor from the chives … It’s really, really delicious.
Here’s the complete recipe:
Winter Vegetable Shepherd’s Pie with Potato, Cauliflower, Cheddar & Chive Crust
Total Time:  50 minutes
Prep: 30 minutes
Cook: 20 minutes
Yield: 6 servings
Ingredients
3 small russet potatoes, chopped
1 head cauliflower, cut into small florets
1 cup grated sharp cheddar cheese
1/4 cup chives, chopped
1 pound 95 percent lean ground beef
1 medium onion, diced
2 cloves garlic, minced
3 medium carrots, diced
3 medium parsnips, diced
1 tablespoon dried oregano
3 sprigs fresh thyme
1/2 teaspoon cinnamon
1 tablespoon tomato paste
1/2 cup red wine
1 cup frozen sweet corn
salt and freshly ground black pepper
Directions
Begin by making the potato crust:
Place the potatoes and cauliflower in a steamer basket and steam over a large pot of boiling water.  Veggies will be fork tender after about 10 minutes.  Transfer vegetables  to a large mixing bowl.  Add  3/4 of the grated cheddar cheese and 3/4 of the chives.  Season with salt and pepper.  Mash the potatoes and cauliflower to a puree with a potato masher. Cover potatoes with foil to keep them warm and set aside.
For the ground beef mixture:
You can begin preparing the beef mixture while the potatoes and cauliflower cook.  In a large saute pan, brown the ground beef over medium high heat. Season with salt and pepper.  Add the onion, garlic, carrots, and parsnips and allow vegetables to soften, about 5 minutes. Add the tomato paste, oregano, thyme, and cinnamon. Next, deglaze the pan by adding the wine. Simmer for 7 minutes, allowing the wine to reduce until sauce thickens.
Assemble the shepherd’s pie:
Remove the thyme sprigs.  Spoon the ground beef mixture evenly along the bottom of a large casserole dish.  Spoon the potato/cauliflower mash evenly over the meat.  Sprinkle the remaining cheddar cheese along the top.  Place in the oven under the broiler.  The shepherd’s pie is ready when the potato crust begins to turn golden brown, after about 10 minutes.  After removing from the oven, top with the remaining chives and serve.